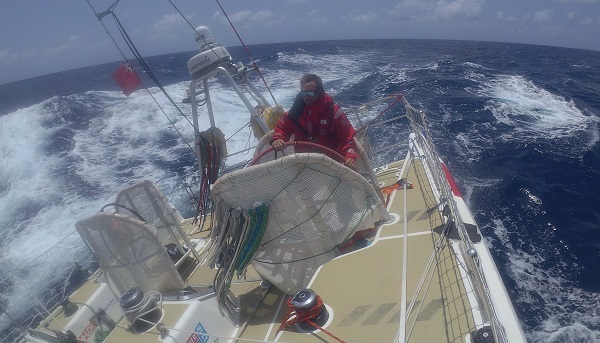 After a frustrating 24 hours languishing in a wind hole off the southern coast of Brazil, most of the Clipper Race fleet is on the move again.

Sanya Serenity Coast remains in first place and whilst Skipper, Wendy Tuck, is relieved the wind has returned, she knows the path to Punta del Este remains tricky. She explained: “Well, that was a hard day in the office. It’s always a bit frustrating when you feel you are taking half a step forward and ten backwards.

“After this light patch, we will be under kite again, and then just to make it that bit more interesting, there will be another little light wind hole waiting for us just off Punta del Este.”

Minus any mishap, Sanya Serenity Coast is the favourite to take line honours, and currently has a lead of around 80nm  on second-placed PSP Logistics, and around 100nm on GREAT Britain in third. But, there is a stiff challenge for the overall Atlantic Trade Winds Leg 1 win forming in the shape of Greenings.

Whilst Greenings is around 360nM behind Sanya Serenity Coast, the team has been awarded a redress of two days, 10 hours, 44 minutes, and 51 seconds by the Race Committee for its forced diversion to Porto for a replacement Skipper.

Overnight, Greenings made the most of not being stuck in a wind hole, travelling 86nM. Relief Skipper and Deputy Race Director, Dan Smith, reports: “We have had a good day avoiding wind holes and have made good gains on the others. As I write this, we are about to change our watches over, gybe the boat, and head southwest to Punta del Este. Three days to go if we avoid those wind holes.”

Morale is high on PSP Logistics, currently in second place, though Skipper, Roy Taylor, isn’t getting carried away, saying: “The game of cat and mouse continues with GREAT Britain, who has stalked us for the last couple of days. Punta del Este is getting closer, and it must be fascinating for all the viewers back home. Who has wind? Who doesn't? When will it arrive? Who will get it first?”

GREAT Britain is currently in third place, but the fight for the final spot on the podium is brewing, with less than 30nM separating the team from the seventh placed Garmin. Skipper of the fourth-placed Qingdao, Chris Kobusch, says: “Almost the whole Clipper Race fleet is within 40nM of us, (only Sanya Serenity Coast, Greenings, and Nasdaq are further away), which I think is quite remarkable after 6000nM and more than four weeks of ocean racing.

“With now less than 500nM to go, and probably all boats heading towards the same waypoint, it will be a close and exciting race to the finish.”

HotelPlanner.com, Dare To Lead and Garmin are currently jostling for position in fifth, sixth and seventh position respectively and their places are subject to change with the varying winds. Liverpool 2018, meanwhile, remains in Stealth Mode and is set to reappear on the Race Viewer at 1200 (UTC).

After being a challenger for a podium place for so long, Unicef has fallen back to eighth place on the leader board. Skipper, Bob Beggs, comments: “Getting closer to the finish and dropping many places in just 24 hours is sobering and it’s time to double our focus and effort to regain some places. We have now climbed out of the wind hole and boat speeds are now back in double figures.”

Visit Seattle has also tumbled down the standings to ninth, and in the absence of a spinnaker, Skipper, Nikki Henderson, has asked people back home to: “Wish us some seriously strong winds from behind, or moderate ones from in front, so that our wonderful Yankee and Main become far more efficient than any spinnaker that the rest of the fleet are using.”

There was some joy for twelfth-placed Nasdaq, who marked two big milestones overnight; logging 6,000nM and passing the 1,000nM to go mark.

Most of the fleet should continue to enjoy decent winds, with the southeast low disappearing off the weather map. Clipper Race Meteorologist, Simon Rowell, says the next front will appear over the finish line in the next 24 hours, though it shouldn’t cause the leading boats too much of a problem, due to the accompanying south-southeast winds. The teams to the north will need to be on alert, as the SSE will form part of the next low off the coast of South America and form a cyclonic patch in the middle, with headwinds behind it.