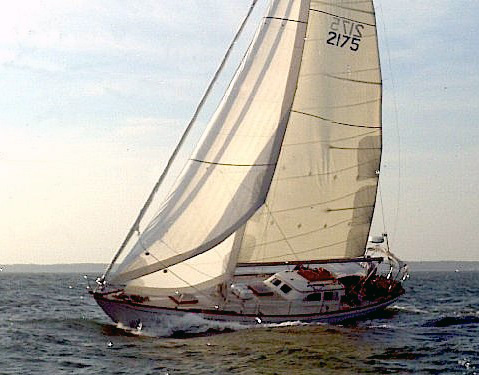 Marion, Massachusetts- June 17, 2015: Skippers in the 20th Marion to Bermuda Race have two more planning days before the start of their 645-mile 2015 version of the “Thrash to the Onion Patch”. They have some big choices to make that will determine where they stand on the leader board next week. Racing starts Friday, June 19th.

Will skippers minimize their consideration of the famous Gulf Stream loops and focus on wind direction? Or do they make the opposite choice and search for favorable southbound current and take what the wind gods deliver on the way? Careful planning, sometimes over months of reviewing trends and patterns shape the choices that will tell the tale.

Wednesday morning, Mark Swanson of North Creek NY— co-skipper and co-navigator and sailing double handed on 'Roust' along with owner Ian Gumprecht of Oyster Bay NY— said he is taking a long look at the Gulf Stream because of the combination of a favorable warm eddy that could shoot them SSE toward. He is also taking a long look at a weather system coming offshore from the west late Sunday and Monday. The new wind and the favorable current now look like they are both setting up to the west of the rhumb line from Marion to Bermuda.

‘Roust’ is sailing this year by celestial navigation and Swanson is concerned the cloud cover that will block their sights. “We chose to sail outside on our delivery up from New York so we could practice celestial navigation at sea. Unfortunately, we had just four hours of sunshine and couldn’t get a sight after that.” From the looks of the weather forecast, dead reckoning will be an important part of finding Bermuda. ‘Roust’ a 34 foot Sea Sprite won the top overall prize, the Founders Trophy, in 2013.

Ron Wisner, skipper of 'Hotspur II' and 2013 winner of the Beverly “Polaris” Trophy and The Navigator‘s Trophy for first place among celestial yachts, said he will make his choices after a final review of the Gulf Stream and the weather. Remnants of TS Bill coming over from Texas will play a big part in his decisions. 'Hotspur II' is a Columbia 50 from Marion MA.

Gulf Stream and wind prediction charts posted by www.passageweather.com below show what that site’s analysts expect from 72 to 144 hours in advance. Bermuda is in the bottom right hand corner at 32.3000° N, 64.7833° W. Marion is at top center. The course is 164º magnetic from the mouth of Buzzards Bay to North East Breakers off Bermuda.

If numbers in the fleet hold, 46 sailboats will cross the starting line just south of Centerboard Shoal in Buzzard’s Bay for the Marion version of the “Thrash to the Onion Patch”. The 118-foot “Spirit of Bermuda”, the island’s sail training vessel and Bermuda’s floating ambassador is the largest entry and only entry in the Classic Division. All of the other entries are in the Founders Division.