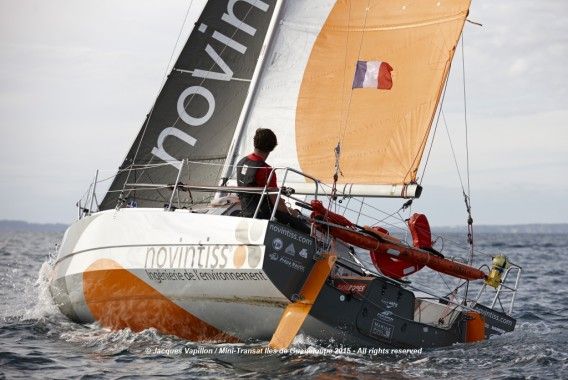 They say that the Minis make the race by racing it.  At these rates, the sailors are reaching exceptional  speeds, but when the sea is choppy, they need to be very careful how they navigate to make the most of their boats, which are designed so well that they sometimes overspeed and cause problems.

Several sailors  interviewed since the start of this Mini Transat îles de Guadeloupe  confessed without shame: never before in their lives have they  sailed at such high speeds in such sustained winds, for such a long time. For an amateur sailor, there are only a few warm up races each season, and it’s clear that the exercise is always more difficult than it seems.

You have to imagine life on board a Mini going at high speeds in 25 knots of wind. After some time, the  hull  stops surfing and crashes into the waves that permanently wash over the deck.  They don’t ever stop worrying that the autopilot will fail in its task… However they still have to sleep (even if for short periods), eat (or at least, stuff some food down), and drink. In these conditions, it’s no surprise that sometimes there’s a badly thought-out manœuvre  or something is dropped because it hasn’t been well attached: there’s no-one to blame.

Several competitors have now joined the cohort  of  walking wounded from the first stage. Fidel Turienzo (Satanas) is getting ready to stop in to one of the ports on the Portuguese coast  between Sines and  Lisbon to repair his damaged mast. Guillermo Cañardo (Peor Para El Sol) should also stop in Porto. Some of the other competitiors are still holed up in ports, such as Pilar Pasanau (Peter Punk) in La Coruna, Jonas Gerckens(Netwerk) in Peniche and Aymeric Blin (Le Marin des Alpes) in Sada.

The leaders in both the one design and prototypes continue to dominate the race. Davy Beaudart (Flexirub) and Ian Lipinski (Entreprises Innovantes) had been tipped as race favourites. To date, they have not proved the predictions wrong.

For others, it is a time for familiarising themselves with the boat: such is the case for Simon Koster (Eight Cube)  from Switzerland who explains that he is still going through the learning stages.

It’s important to note that some of the competitors are doing well, Despite their lack of experience: Edouard Golbery (Les Enfants du Canal) and  Mathieu Bourdais (Tous au Large) who are racing in the Series class, both with very  little Mini Circuit racing under their belts, currently lie in 9th and 10th place respectively in the provisional standings. Many  would not have imagined they would be doing so well…