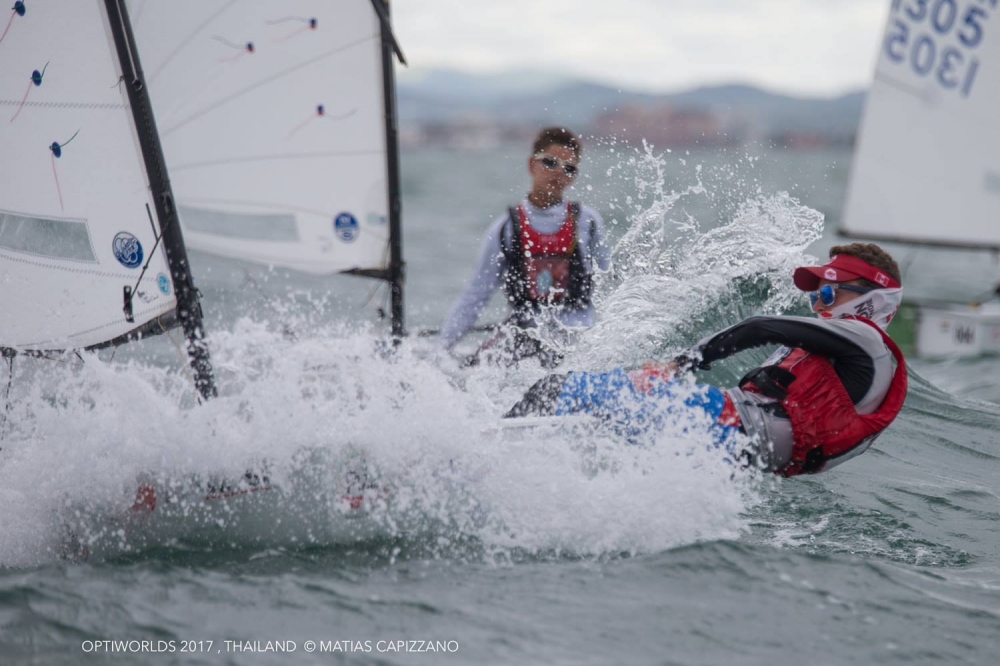 Pattaya, Thailand: A sunny, windy day greeted sailors on the second day of the Optimist World Championships 2017, setting the stage for a day of perfect racing conditions with a dramatic ending sure to be remembered for years to come.

White caps offshore of the Royal Varuna Yacht Club heralded winds of 15 to 18 knots that lasted through the day. As Local Race Officer Neil Dunkley put it, “Bigger wind sailors are going to have their day today.”

He also warned that the wind might soften at the end of the day, but, as the last fleet finished its second race, the wind suddenly gained strength, a freak storm rolling in with little warning, sending Optimists speeding over large waves in torrential rain on their way home.

At the host venue, it was all helping hands into the sea to assist sailors trying to return to shore, a reminder of the community spirit that sailing fosters. As Malta’s Andrea Schultheis put it, “That is sailing. Everyone understands the weather is the one thing you can’t control. Everything else has been great. With the storm, we just needed more hands, which we got.”

All fleets did finish their two scheduled races, which was what was most important to coaches and sailors alike going into the final day before fleet splits.

Hopes were the stronger wind would overcome the difficult starting sequence seen on the first day of qualification trials when a strong current pushed many sailors over the line. Several fleets did experience general recalls on Friday, however, with 18 competitors black flagged on restarts. While such may have dashed the hopes of a few aspiring to make the gold fleet, it was a great day of sailing for others.

As Australian coach Rob Brewer said, “It was a beautiful racing day. It was perfect until the storm came. Then it got busy, but was a fun ride home.”

“It was awesome,” said Indian youth sailor Navyn Prabhakar, who was thrilled to fly home in five minutes instead of 20.

“It was a good racing day and it was fun coming home,” said Peru’s Florencia Chiarella.

“Everyone was helping,” said another sailor, appreciative of the volunteers who rushed to shore to assist in the torrential rain.

All sailors and boats were accounted for at the end of day. Only one set of spars was bent beyond use, replacements authorized.

Macau’s coach Tablate J-Monday described it as “a good experience”, proud his sailors managed to finish although at the back of their fleets.

China’s team leader Chen Chunxin said, “The storm is over. Now what were the results?”

Coaches from South Africa and New Zealand coaches were not flustered. “This is what we are used to,” said one of the wild weather at day end, which was followed by a spectacular sunset.

When results were released late Friday evening, it was clear stronger winds led to a shakeup at the top of the fleet, only four repeats on the leaderboard of the top ten from the first day of racing – Mic Sig Kos Mohr of Costa Rica, Marco Gradoni of Italy, Oliver Jacket of the Netherlands, and Haoze Fang of China.

One more day of qualifying races are scheduled before sailors will be split into gold, silver and bronze fleets based on rankings. At that time, the battle for the four trophies on offer will heat up at the world youth regatta, which sees a record-breaking 281 entries from 62 countries this year.

The 2017 Optimist World Championship is organized by the Royal Varuna Yacht Club with the endorsement of the Yacht Racing Association of Thailand and the Junior Sailing Squadron of Thailand under the International Optimist Dinghy Association.

It is supported by strategic partners including Pattaya City, the Sports Authority of Thailand and the Thailand Convention and Exhibition Bureau. Co-sponsors include The Pizza Company, Apollo (Thailand), Thai Airways, and True Corporation.