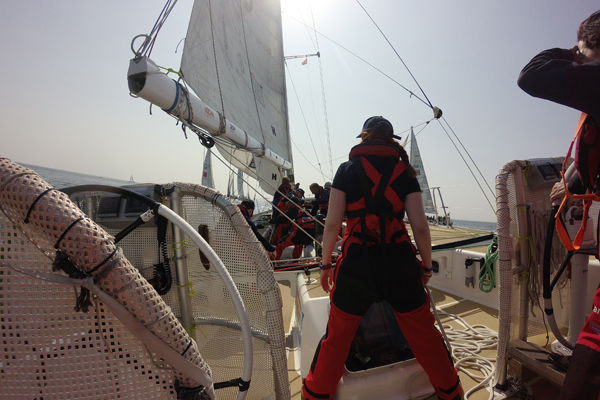 The yachts have passed the first waypoint off the southern tip of Japan, and are now headed upwind north towards the Great Circle route in stronger northerly, north-north-easterly winds that will continue to build.

The sea state has also built, due to the 3+ knots of the Kuro Shio current helping push the teams along, but it is against the wind, making for rough seas.

When the teams passed Japan, the wind had died and the yachts that were to the south were in more favourable conditions, meaning the leading boats’ leads were reduced.

Garmin is still leading the fleet, with LMAX Exchange second 4.7 nMs behind and Unicef now up a place in third, 2 nautical miles in front of Derry~Londonderry~Doire which has dropped two places.

Peter Thornton, Skipper of GREAT Britain, in fifth place, described the weather over the past 24 hours.

“We've been holding good sail over the past 24 hours to take advantage of the northerlies down through the last bit of the Yellow/ East China Sea. That saw us in a favourable position and managing to catch up with the leading group.

“Especially rounding the bottom of Japan where we all sailed into a zero wind section. I was hoping to miss it by staying further offshore but no joy. In fact the wind filled in again from the north-east which meant I had to watch as those who we'd just caught up sailed away again – LMAX Exchange, Garmin, Derry~Londonderry~Doire, ClipperTelemed+ and Unicef!

“So after the north-easterly started to build, it really did build, up to and continuing now around 35-40 knots in a wind against current situation which makes things very uncomfortable at the moment,” Peter added.

The wind is continued to increase for today with a developing secondary low pressure system, then once that dissipates, there will be lighter winds.

However, there could be another low on 26 March which could give strong easterly winds just south east of Tokyo Wan.

Max Stunell, Skipper of PSP Logistics, in seventh place, said: “We rounded the tip of Japan at breakfast having managed to catch back up with a few of the boats that passed us yesterday as we ran into the wind shadow created by the land. Thankfully we carried some momentum through the light patch and soon the wind began to build again along with the waves.

“Within about 30 minutes we decided to drop the Yankee 1 and then reefed the main. We are now slamming into waves induced by wind against tide and it looks to remain this way along the coast of Japan. The new crew are adjusting to life at 45 degrees for the first time after a bit of a baptism by fire,” Max added.

Ichorcoal, in twelfth, headed north for a while and has now tacked and is heading east once again.

How will the teams cope with the conditions as the wind increases? Will Garmin hold onto its lead, or will LMAX Exchange or Unicef overtake it?