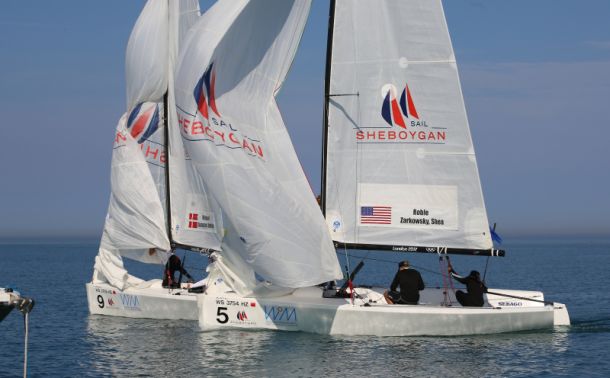 On Lake Michigan, in the mid-US town Sheboygan, the world’s top ranked women match racing skippers are now gathered for the penultimate 2015 WIM Series event. Named after the legendary sailor, the Buddy Melges Challenge will be raced for the remainder of this week.

“We’re really excited to be back in Sheboygan. It’s not officially our home waters, but we’ve done a lot of match racing here and love the waters and the boats. We were really disappointed losing the final of the latest WIM Series event in Sweden, so now we’re looking forward to a different outcome” says local hope and current WIM Series runner-up Stephanie Roble.

Kicking off with two Scandinavian sea events, the ISAF Women’s Match Racing World Championship in charming Middelfart, Denmark, and the Lysekil Women’s Match in the picturesque archipelago of Western Sweden, the 2015 WIM Series now moves on to interesting fresh water conditions. With the course set just off the beautiful Blue Harbor Resort in Sheboygan, the intense and exciting racing will be visible from the bluffs along Lake Michigan. The Buddy Melges Challenge will be raced in a fleet of totally equal Elliott 6Ms, the same boat type as in the London 2012 Olympic Sailing Competition.

“I haven’t raced that boat since. It might turn out to be rather funny to watch” says World #1 and 2015 WIM Series leader, Camilla Ulrikkeholm Klinkby of Denmark. “I think we’ll see a mix of conditions this week. It will be challenging for sure, but my team is really experienced and I feel great confidence going into the event” Stephanie Roble comments.

“Sailing in September in Sheboygan can be challenging, as the weather changes from the light air and heat of August, to a more fall like weather pattern, where it can be a mix of everything. Last year we struggled with a stalled high pressure that provided some days of very light winds. This year’s event looks to be setting up quite nicely, especially for the first couple of days” Principal Race Officer Rich Reichelsdorfer points out.

The Sailing Education Association of Sheboygan, SEAS, as the over arching organization of the boating activities groups of Sheboygan, is also honoured to have the WIM Series in town again this year.

“The Series was started in an effort to provide women with racing opportunities similar to those available for men, and SEAS is all about creating boating opportunities for people who might not otherwise have them” states Leslie Kohler, president of SEA Sheboygan.
“Having great partners like Sail Sheboygan, SEAS and the Sheboygan Yacht Club is what makes the WIM Series so successful. With their continued commitment to women’s match racing since 2007, we are very excited to have the Buddy Melges Challenge as a cornerstone event in the WIM Series now and in the future” WIM Series Manager Liz Baylis concludes.

The Buddy Melges Challenge has been an ISAF Grade One match racing event in Sheboygan for a number of years. The event is named after the famous Olympian, America’s Cup sailor, boat builder, and Wisconsinite Buddy Melges, whose contributions to the sport have been long standing. The trophy for the event resides in the Sheboygan Yacht Club and is a replica of the America’s Cup.

The trophy for the WIM Series overall winner – The Terry J. Kohler Perpetual Trophy – is named after Sheboygan businessman Terry Kohler, a long-time proponent and supporter of women's match racing and all of the sailing activities at Sail Sheboygan.