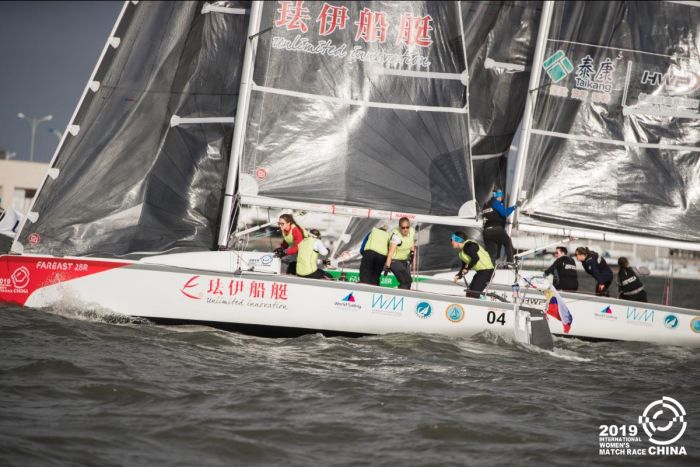 After the morning briefing where the top four teams from the round robin stage earned the right to choose their opponent for the quarter-finals, racing took off in conditions that were very similar to yesterday with a solid breeze of 14 knots gusting to 20.

With a total prize purse of USD 30,000 on the line, the top eight teams got down to business on the race course in Shanghai for the penultimate day of the inaugural 2019 China International Women’s Match Race.

The first quarter-final turned out to be a tight duel going to a fifth and deciding match. With a close last race where the Australian team led by Clare Costanzo showed their experience from the nimble asymmetrical boats they sail at home flew the gennaker wing on wing to starboard, succeeding in giving a penalty to the French team skippered by Margot Riou. After that maneuver made just after the last windward mark in the fifth match, the team safely sailed into the semis.

Swedish Team Bergqvist went out and sailed in a confident manner winning the second quarter-final 3-0 over French Skipper Vennin. Tactician Julia Carlssonmade the call for the favored pin-end and the team executed the plan which allowed them to be ahead from the start, giving them the freedom to play the windshifts up the course. This tactic proved to be a winning recipe and they won all their matches by a comfortable distance.

The results of the morning quarter-finals turned out to put all French hope and pressure on fellow countrywomen Pauline Courtois and her Match in Pink by Normandy Elite Team. The world number one and WIM Series leaders lived up to their ranking and gave a near flawless performance and did not give their Russian opponent any chances to pass. Pauline summarizes her team’s day and thoughts for tomorrow’s racing:

”It was at first a long day ashore so we were very happy to go on the water. The conditions were really fun and we loved it! It was a really great sailing time with quite a lot of wind. We wanted to do simple things and keep the maximum energy we could for tomorrow. We can't wait to race more tomorrow with a chance to win the regatta … and the WIM Series trophy!”

As the third and final stop of the 2019 WIM Series, the China International will prove pivotal in deciding the 2019 WIM Series Champions and as Courtois mentioned, the sailors are well aware of it. Today all of the teams fought hard and showed that they all want to be at top of the podium. Those spots will be decided in tomorrow’s semis and finals.

To see the complete scorecard, please visit www.wimseries.com/results/2019-shanghai-results which will be updated live as racing progresses.