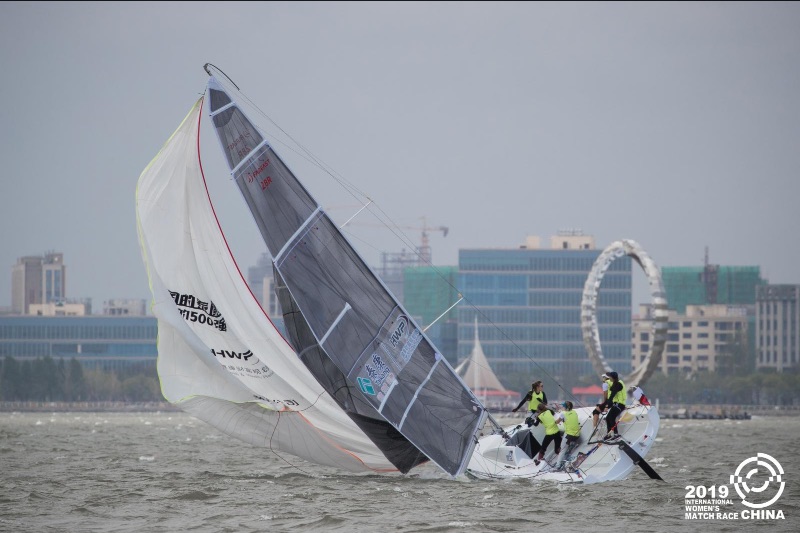 Ekaterina Chashchina (RUS) and her Seven Feet Team hang on in the blustery conditions to advance to the quarter-finals in Shanghai. Photo: CIWMR 2019.

The morning of the third day of racing at China International Women’s Match Race decided the teams that would make it straight to the quarter-finals and which teams would have to fight for the four spots in the repechage round.

Racing took off in a breeze of 10 knots with nice shifts to play for the teams as we saw the higher ranked teams racing each other in the end of the first stage. But the matches got tighter and the excitement built, as did the wind. There were quite a few lead changes as the spectators watched from the shore.

At the end of Stage One, the Australians led by skipper Clare Costanzo were the only team that beat Pauline Courtois’ Match in Pink by Normandy Elite Team who won the first stage with a ten wins and only that one loss. Kiwi Celia Willison’s Edge Racing and the Swedish team of Johanna Bergqvist tied with nine wins, with Willison winning the tie break. These three teams were joined by Margot Riou and her APCC  Women Sailing Team to advance directly to the quarter-final and earn an afternoon off from racing.

In the afternoon the breeze at Dishui Lake was building to over 16 knots with gusts to 22. Six teams went out to the Repechage round to fight for the last four spots to the quarter-finals. Costanzo’s Australian team found themselves just outside the top four team, but they had a second chance. And as the day went on the Australians looked better and better. In the Repechage they went undefeated and Costanzo summarized it: “Things have started to fall into place on the racetrack. We are really enjoying sailing with each other and the wind today was fun in the Fareast 28r. Our race against Courtois was good to consolidate everything we have learnt as a team and convert it into a win. We’re really looking forward to more racing tomorrow.”

The breeze made it challenging in the Fareast 28r boats with the huge gennaker to control. And it came down to the very last match of the day when Russian skipper Ekaterina Chashchina managed to pass the local Chinese team skippered by Xiaowen Ni just before the finish line, winning with only a few meters between them. A few meters that gave her a ticket to the quarter-finals.

After being defeated and thrown out from further racing Xiaowen Ni commented on the loss and their experience as a local team at the event: “We feel very good about our achievement  this week. For me it was the first time as a skipper in a match racing event and we are new as a team. I did match racing in the Elliott 6m as a bow-person, but it was more challenging and fun to drive. We really sailed our best and the learning curve is steep. We are already looking forward to next year!”

To see the complete scorecard, please visit www.wimseries.com/results/2019-shanghai-results which will be updated live as racing progresses.