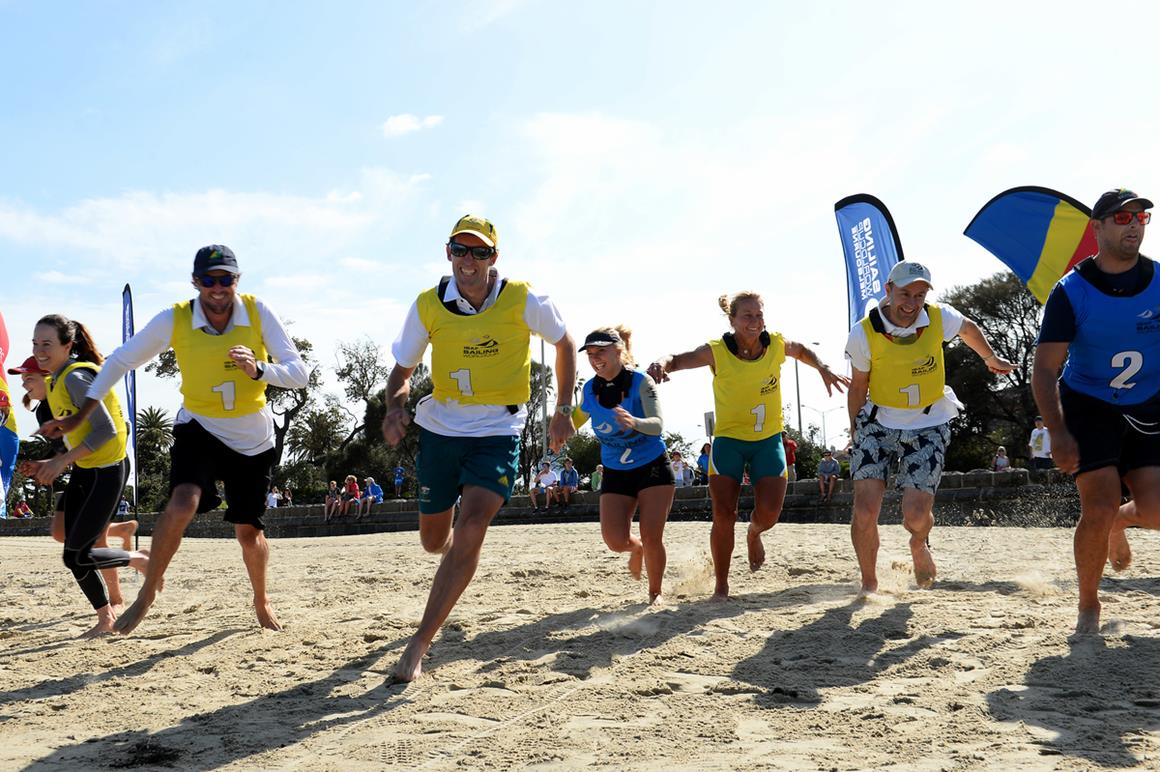 The Opti kids had the weight advantage and Queensland’s Blake Wilson coolly shook off the carnage going on behind him to take out the two-lapper around a mini course set up off Sailing World Cup host club, Royal Melbourne Yacht Squadron at the St Kilda sailing precinct.

While Wilson ran through the line pumping up the crowd the Olympians were puffing from controversially pumping the mainsail and paddling, trying to catch the whipper-snappers as credentialed World Cup race officials and umpires looked on shaking their heads in disbelief.

Beijing 2008 gold medallist in the 470 class, Nathan Wilmot, was the first of the big kids to run up the beach through the finish flags, followed by his 2008 crew Malcolm Page, who became a dual gold medallist at the London 2012 Olympic Games.

There was a wrestle at the finish between the former teammates then came Mark Turnbull, World Cup event director and gold medallist from the Sydney Games in the 470 class. It was alleged post-challenge that when an Opti sailor called for buoy room at a turning mark, Nice Guy Turnbull replied with “rent-a-boat-rights” and charged ahead with no regard for the racing rules of sailing.

Wilmot nabbed the prize of a Styrofoam pool noodle and first, second and third Opti sailors got to water pistol their idols. As Tweddell came ashore with his snapped centerboard held aloft, a perpetual trophy was created and an annual Opti Olympic Challenge born at Sailing World Cup Melbourne.

Today the invited classes, including the international Optimist class, join the Olympic classes out on Port Phillip in a building forecast sea’breeze, potentially up to the high teens out of the south-west.

With the full complement of more than 900 Olympic, Paralympic, invited and youth class sailors racing, every available race official is on water setting up for the two sessions across eight course areas, the first due to commence at midday in the current 9kt SSW and the second schedule to begin at 14:30hrs local time.

There’s a strong wind warning for Friday December 13 for Port Phillip, south to south-westerly 10-15 knots becoming westerly and increasing to 20-25 knots in the morning the winds tending west to southwest at 20-30 knots around midday.