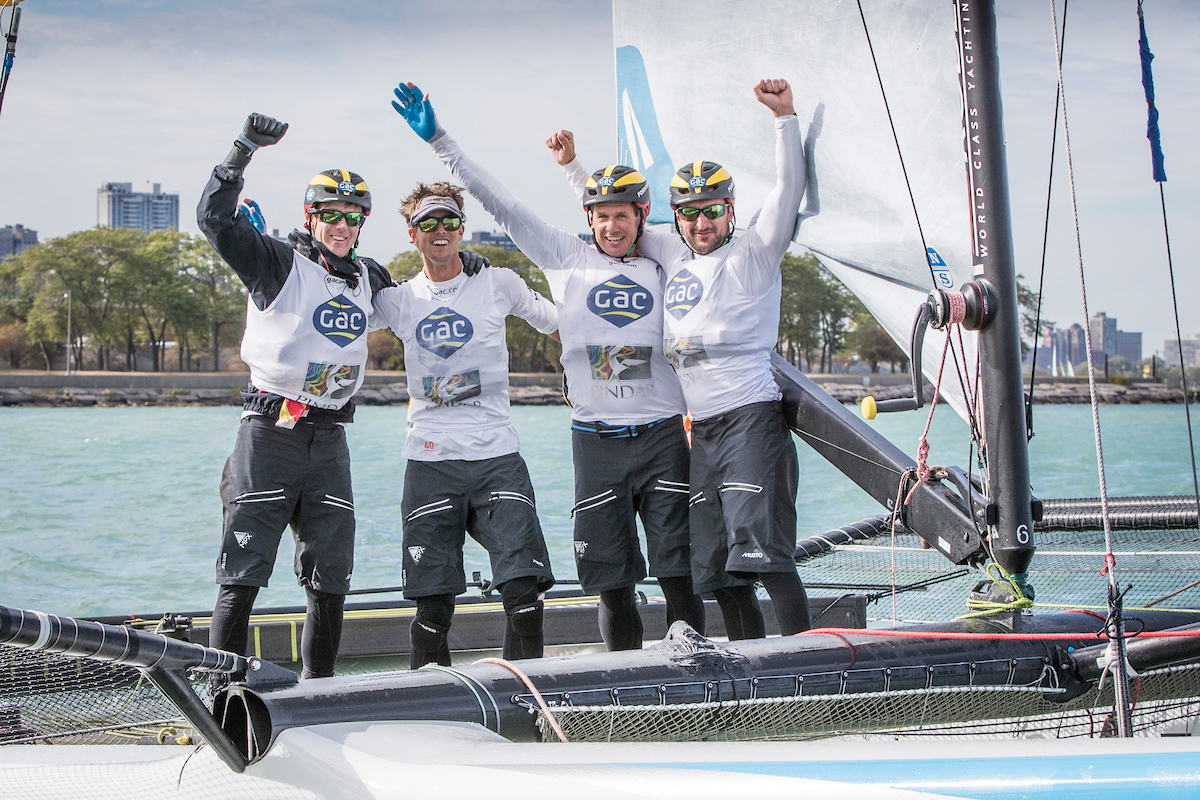 Iain Williams and his crew celebrate their victory in Chicago. Photo Lloyd Images/WMRT.

The win could be a preview of things to come in three weeks time in Shenzhen, China where the two skippers meet for the last time this season to decide who will win the overall 2017 Tour and the Match Racing World Championship.

“This is great for the team. Phil’s been dominating all year making us all look a bit silly so it’s nice to knock him off his perch”, said an enthusiastic Williams after just crossing the finish line.

Williams’ roll started early in the Semi Final stage started early with the British skipper knocking off Australian Sam Gilmour 3-0 in an enthralling battle which saw penalties galore, but the scoreline told of a dominating victory.

It was in this series that hometown Chicago favorite Canfield looked to have booked his ticket into the finals after going up 2-1. However, the fourth race seemingly foreshadowed Canfield’s fate when after handing a double blue penalty to Robertson at the start and jumping out to a four-boat length lead, he opted to gybe and take the less favored bottom mark allowing Robertson to cross on the next tack and extend for the win.

Moving to the Finals, Williams quickly got on the board early with a win in the first race only to narrowly avoid taking a loss in the second after winning the start.

Leading for the majority of the first three legs, Robertson managed to pull back at the first windward mark from where he mounted attack after attack on the downwind, finally forcing Williams into drawing a boundary penalty after he pinned the China One Ningbo skipper out of the race course resulting in contact between the two teams.

However, clearing the penalty at the bottom gate, Williams hooked into a shift on the right hand side of the course to challenge the Kiwi at the final top mark rounding, barely gaining mark protection and clearing ahead in time to limit Robertson from any chance to mount a luff on the final reach to the finish.

An OCS (on course side) penalty at the start of the third race for Robertson sealed his fate as Williams extended through the course handily, winning the 2017 Chicago Match Cup.

After the conclusion of racing, Robertson reflected on the level of competition. “I think we are seeing the fleet take a big jump forward which is good – everyone is very competitive – even Evan Walker pushed us to the limit”, said the China One Ningbo skipper. “Ian absolutely out sailed us today.”

On being the favorites going into the final event in China in three weeks, Robertson acknowledged he had a target on his back. “No doubt every single team out there wants us to lose. We are trying to ramp up towards then and learn what we can, and take it into the big one. We have a title to defend; and Ian’s just peaked too early so that’s good. So now we’re looking for redemption.”