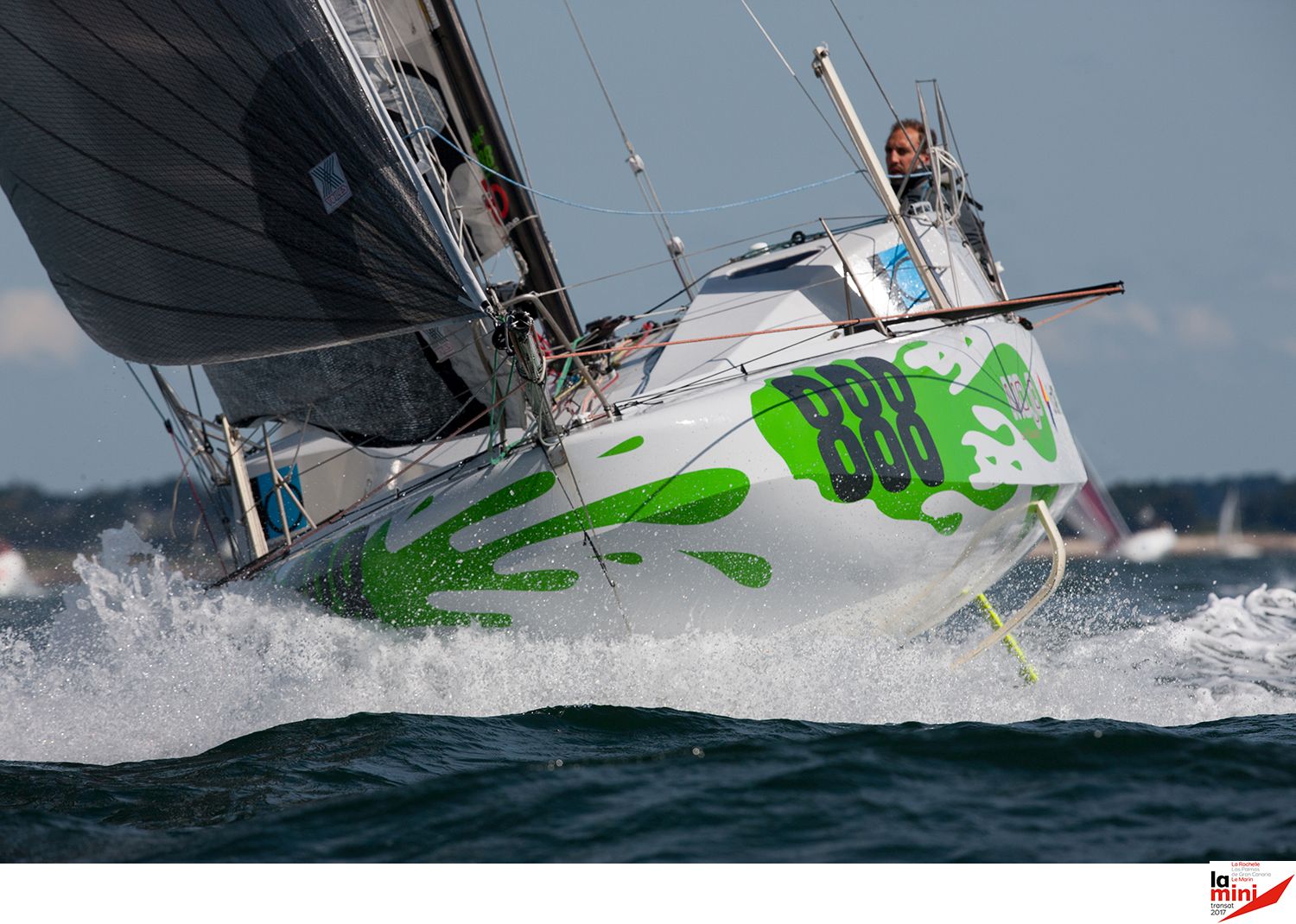 The wind is gradually veering round to the north, but it’s still struggling to establish itself. In the light airs, some sailors are trying to hoist spinnakers, or even the code 5, which is flatter and easier to set. Failing the wind on the stern, the Mini skippers are going to have to zigzag their way along in a quartering wind to make the north-west tip of Galicia.

After two days of racing, the solo sailors in the Mini-Transat la Boulangère are still dawdling across the Bay of Biscay. The fleet is currently at the longitude of Gijón. The wet, westerly breezes of the initial hours of racing have now given way to blue skies, leaving the sailors only an asthmatic northerly wind to play with. No long-term strategy is possible in these conditions so the focus must be on trying to keep up a bit of speed and to continue making headway.

In such an atmosphere, the latest generation boats are struggling to make a difference. Though Ian Lipinski (Griffon.fr) and Jörg Riechers (Lilienthal) are managing to contain the attacks from the most versatile boats, like that of Erwan Le Mené (Rousseau Clôtures) or Aurélien Poisson (TeamWork), others are really under pressure, like Simon Koster (Eight Cube Sersa) and Quentin Vlamynck (Arkema 3). Simon has decided to bend his course southwards, the weather forecasts indicating a slight increase in the wind along the coast. Keni Piperol (Région Guadeloupe) and Antoine Cornic (Destination Île de Ré) are following suit.

In the production boat category, the favourites remain at the front of the pack. Rémi Aubrun (Alternative Sailing – Constructions du Belon) has got the better of Erwan le Draoulec (Emile Henry). Hot on their heels are Clarisse Crémer (TBS), Valentin Gauthier (Shaman – Banque du Léman) and Ambrogio Beccaria (Alla Grande Ambecco), in the vanguard of the ‘scow bows’. To understand the pace being set by the leaders, just take a look at those bringing up the rear of the fleet. Indeed, Luca Sabiu (Vivere la Vela), victim of autopilot issues, and Marc Miro Rubio at the helm of his Pogo 1 Alfin are already over 45 miles astern. Right at the back, after having to return to La Rochelle after the start, Gwendal Pibot (Rossinante) could well have some company again in a few days’ time.

There are no major issues to report among the fleet in these mild conditions. Camille Taque (Foxsea Lady) has resolved her rig problems and managed to fix her keel, which had some play in it. Quentin Vlamynck has reported the failure of his masthead lights… With the exception of Matteo Rusticali, dockside in Royan after finally being towed by a trawler and then the lifeboat, everyone is still racing.

The head of the fleet is set to make the tip of Galicia in the early hours of Wednesday. From there, the skippers will have to make headway along the Costa da Morte, from the Sisargas Islands to Cape Finisterre. On the programme for the solo sailors, a sharp acceleration in the breeze from the north-east, which should propel the Minis southwards at high speed. It will also be decision time, with the skippers having to choose between taking the inside track at the TSS of Cape Finisterre at the risk of suffering the effects of the wind shadow from the coast, or making westing and benefiting from a steadier, albeit meatier breeze. The Mini sailors have 24 hours to make their choices.