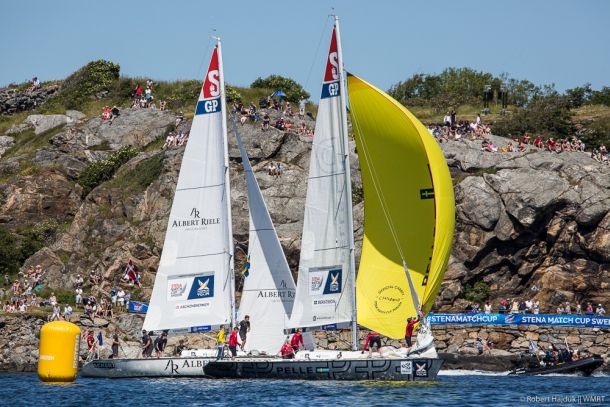 Marstrand, Sweden (1st July 2015): Teams were faced with soaring temperatures and challenging light air conditions today during Qualifying Session three of the Stena Match Cup Sweden in Marstrand, as the final races of the Qualifying round determine which 8 of the 14 team field will advance to the Quarter Finals.

Defending ISAF World Champion Ian Williams (GBR) GAC Pindar remains undefeated with a 10-0 scoreline, needing just one more win from his last 3 races to finish at the top of the standings, and thus earn him first choice of his Quarter Final opponent.

“Flight 20 was the first time we have really been behind this week. We had a bit of work to do, Keith [Swinton] had a pretty good lead on us at one point. But it was so fickle out there, so we focused on our own shifts and it came good for us.” said Williams.

After his impressive performance yesterday, Berntsson faced a difficult day after being black flagged in his race against Dane Joachim Aschenbrenner, and then dropping three penalties against Taylor Canfield. As if it wasn’t enough, Berntsson then received an unfortunate knock to the head requiring him to come ashore briefly. However he and his Berntsson Sailing Team know the Marstrand waters better than any, and his Quarter Final place seems safe for now.

Fellow Swede Nicklas Dackhammar from Essiq Racing also struggled today with two losses from three races resulting in the team dropping to the lower half of the leaderboard.

“Of course we are disappointed because we are fierce competitors just like all the other teams” added Dackhammar. “But we are happy with our performance even if we have had some ups and downs. To compete here at Marstrand this week has been a dream come true for us.”

11 teams from the 14 team field can technically still gain enough points to advance to the Quarter Finals, with Denmark’s Rasmus Viltoft , Austrlalia’s Sam Gilmour and Sweden’s Anna Ostling now out of the competition.

Racing resumes tomorrow at 10.30 for the final three flights of Qualifying after which the Quarter Final picks will be made. During the afternoon the event’s charity, the Childhood Foundation will host an array of Swedish stars from the world of sport, television and music in the Stena Match Cup Celebrity Race.