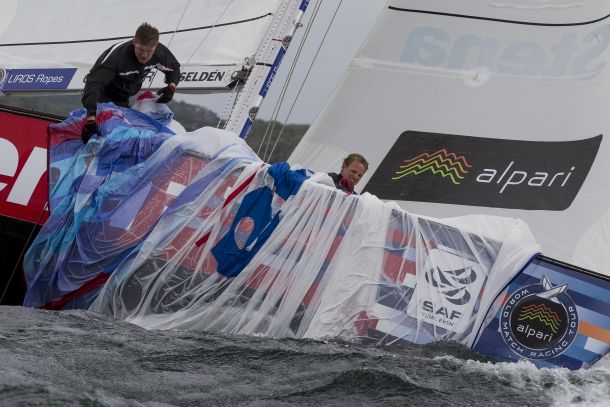 Marstrand, Sweden (3rd July 2014): Stena Match Cup Sweden is known for being one of the few events where, thanks to the boats and venue topography, sailors can race in anger inshore in gale force conditions with spinnakers. Over its 20 years this has provided some of the most action-packed match racing of all time, all visible to the spectators packing Marstrand’s natural sailing stadium.

Today’s racing was a classic example with the winds blowing a solid 25 knots, gusting to gale force. It was a day of shredded, wrapped and trawled spinnakers, collisions, a broach of the normally unbroachable DS37 as well as some at-the-limit match racing.

“It is great to get through in the top spot, but our thoughts are now on the Quarter Finals,” said Williams. “We have got to bring out our A-game.” This afternoon Williams picked to race Joachim Aschenbrenner in tomorrow’s Quarter Finals.

As to today’s big conditions, Williams said they had just been under control, although they suffered a twisted kite. “It wasn’t crazy, but it puts more emphasis on boat handling, setting the boat up well and getting it balanced. Boat speed differences become more marked in those conditions, so it was good to have a few old hands on board.” The DS37 can withstand being raced in 30 knots mainly due to their having large rudders.

Mathieu Richard made a late charge, winning his last three key matches against Robertson, Hansen and Swinton. The French team had a particularly action-packed match with Hansen: “It was a crazy match which we will remember for a while. We loved it – a dog fight with penalties, big luffs, a big fight, very physical on board and big engagement for everyone. It was very good racing.”

Also through and keeping Swedish interests alive is Bjorn Hansen: “It was a fantastic day for sailing. I really enjoyed it, especially the second race when it really got up to 30 knots in the gusts and you started to get some waves coming in that you could surf on. All the people who came here, even if it was raining, really appreciated what they saw out there.”

Last year Hansen came back from the brink to claim the Stena Match Cup Sweden title, something he hopes to repeat this year.

Sadly the bottom six teams are now out of the competition. This includes the two match racing ‘legends’: Swede Magnus Holmberg and American three time ISAF Match Racing World Champion, Ed Baird, who finally lined up today with the American coming out on top.

Some of the younger sailors are also heading home. Nicolai Sehested and his Trefor Match Racing team will be returning to Denmark. “It has been a great week,” said Sehested. “It is always good fun racing in big wind. Today the game was on.” Sehested had a particular good race against Johnie Berntsson, where after much overtaking, his Swedish opponent ended up a penalty down and with his jib wrapped around the forestay.

In last place on two wins (against Ed Baird and Magnus Holmberg) was 26-year-old Swede Viktor Ogeman. “We didn’t do as well as we’d hoped,” he said. “We came here hoping to get into the quarters. We feel we’ve improved from two years ago but we had a lot of close matches and weren’t quite there.”

While the DS37s are difficult broach the young Swedish team managed it on their final downwind leg in their match against Aschenbrenner.