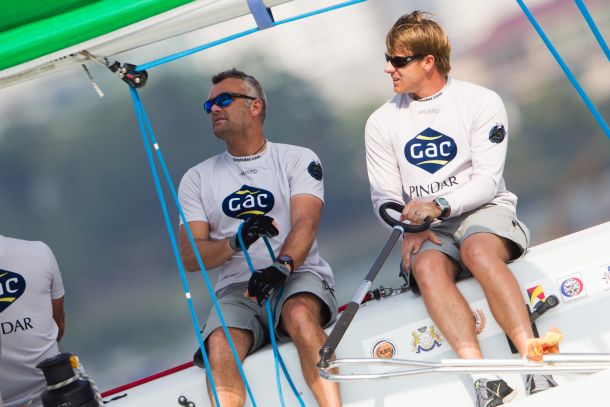 Johor Bahru, Malaysia (13th Feb 2015): Ian Williams (GBR) has one hand on the ISAF World Championship trophy tonight after moving to match point in his Monsoon Cup Malaysia Semi-Final against Eric Monnin (SUI). What should have the GAC Pindar skipper sleeping even more soundly tonight is that his arch-rival for the world title, Taylor Canfield (ISV), is 2-0 down in his battle with Mathieu Richard (FRA). All things considered, Friday the 13th really couldn’t have gone better for the Briton, bidding for a record fifth World Championship title on the Alpari World Match Racing Tour.

The day in Johor Bahru started with a light-airs conclusion of the four Quarter Finals, although three of those duels finished sooner than anyone could have reasonably expected. David Gilmour’s (AUS) starting just wasn’t good enough for the inch-perfect Williams who dispatched the young Aussie 3-0. Canfield was equally dismissive of Pierre-Antoine Morvan (FRA), the French Wild Card competitor unable to reproduce any of his match-winning form from the first day of the regatta. The biggest shock was the other Wild Card, Eric Monnin’s cool assassination of Phil Robertson (NZL), last year’s winner of the Monsoon Cup, who normally looks so at home in the Foundation 36 keelboats.

Not that the WAKA Racing crew sailed badly, just that Team Sailbox from Switzerland pounced on any small mistake by the Kiwis. Robertson was characteristically blunt. “We were looking to change the momentum from yesterday, but Eric sailed superbly well. Very disappointed not to defend the title, but it is what it is, and we’ve gotta suck it up.”

The only Quarter-Final that went down to the wire was between Keith Swinton (AUS) and Mathieu Richard, with the French LunaJets team getting the job done on the final run of the fifth and final match.

After a two-hour break for prayers in the middle of the day, the draw for the Semi Final pairings took place, with Williams revealing that he would race Monnin for the right to get to the Final. Considering the Swiss team had just taken their last seven matches, it seemed like a bold choice, but as Williams said, whoever you choose at this end of the competition is going to be tough. “The Semi Finals pick is always difficult, everyone has to have sailed extremely well to get this far,” he said. “We felt Eric had less experience, particularly in these boats, although being defeated by him at the most recent event in Bermuda was a good reason not to pick him. But we also thought Mathieu Richard had a good chance against Taylor Canfield, and that was important as well.”

The breeze was slightly stronger for the afternoon session, and this also was a factor in Williams’ considerations. Whereas every other team is made up for five large guys, Team SailBox races with five smaller guys and one girl to get the Swiss team on maximum crew weight. “Eric is stronger in the light air,” said Williams, “but we’ve got some big strong boys on board, and muscling the boat around probably helps us in the windier conditions.” This kind of attention to detail, analysing every possible advantage – no matter how small – is what Williams is known for. He is the most serious skipper on the Tour. So it was a surprise to hear the Brit joking around with his tactician, the Magnum-moustached New Zealander Chris Main, on one of their victorious runs to the finish line. “What score do you give me for that start, Chris?” asked Williams, fishing for a compliment after a precision execution of the start a few minutes earlier. “I dunno, six and a half out of 10?” replied Main, deadpan. “Six and a half? You’re killing me…” said Williams, mock shocked at Main’s brutal, Simon Cowellesque dismissal.

Williams seems to be enjoying himself more than usual, and asked why that might be, he replied at the press conference after racing: “I don't want to get too emotional about it, but I think having a son 12 weeks ago gives you a different outlook on life. Maybe I have been able to put my racing more into perspective.”

A new perspective certainly seems to be working, and it’s a new perspective that Canfield is seeking for the final day as he sets out to break Richard’s 2-0 momentum. “We’ve only got to win three in a row,” reasoned the US Virgin Islands skipper. “We’ve done that plenty of times before, so no reason why not again. We sailed well in both races against Mathieu, kept it close both times. So we just need to start even or better, and we stand a good chance tomorrow.”

The Semi Finals & Finals continues at 1000 local time (UTC +8) on Saturday and can be watched live via the Tour’s Livestream page https://new.livestream.com/WorldMRT/mcm-15-f

Watch the full replay of the Quarter Finals and Semi Finals on https://new.livestream.com/WorldMRT/mcm-15-qsf