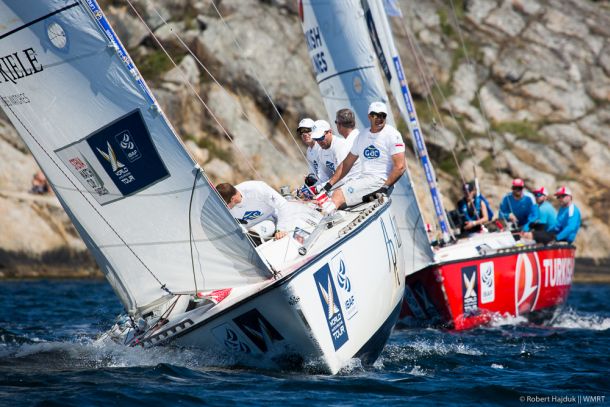 03/07/2015
Marstrand, Sweden (2nd July 2015): Defending ISAF Match Racing World Champion Ian Williams (GBR) GAC Pindar has led his team through a faultless round at Stena Match Cup Sweden winning all 13 of his Qualifying races as the event rolls into the start of the Quarter Finals tomorrow. Stena Match Cup Sweden is the 3rd World Championship Event of the 2015 World Match Racing Tour (WMRT).

“We’re delighted with our perfect record in Qualifying and our performance so far,” said Williams. “The conditions here have suited us well and we’re excited about the rest of the week ahead. Anything can happen in the knockout stages, so we’ll regroup tomorrow and be ready for whatever is thrown at us.”

Commenting on being selected by the five-time World Champion in the Quarter Finals, New Zealander Reuben Corbett simply added “We’re ready. Bring it on!”

Simone Ferrarese, competing this week during his busy Olympic Finn training schedule, narrowly missed dropping out of the competition after securing his Quarter Final place on a 4 way count-back, due to his win against Bjorn Hansen earlier in the week.

Australia’s Keith Swinton similarly didn’t race today but was safe for the Quarter Finals with 8pts and finished 3rd in Qualifying. Swinton selected Johnie Berntsson for his Quarter Final who has certainly found his stride this week in Marstrand and is confident his team have more to give in the final few days of the event.

“We felt pretty calm with seven wins and one loss [in the Qualifying rounds]. Now we look forward to racing Keith, in fact we recruited his trimmer to our team and that might be an advantage because we now know a lot of Keith’s tricks!”

The fourth Quarter Final pairing matches Taylor Canfield (ISV) US One and Phil Robertson, this week sailing for Trefor Match Racing in place of Nicolai Sehested.

Robertson chose the hard route to his Quarter Final place by accidentally sailing an extra lap against Rasmus Viltoft (DEN) Team Viltoft handing victory to Viltoft, and forcing Robertson into a must win his race against Switzerland’s Eric Monnin (SUI) Team Sailbox. It was the last of three losses today for Monnin unfortunately forcing him out of the competition.

Similarly, Joachim Aschenbrenner is eliminated from Stena Match Cup with a disappointing three losses today against Robertson, Corbett and Williams.

Quarter Final racing begins at 1030 CET tomorrow and with a forecast for sunshine and 15 knots of wind from the south, the racing will provide the thousands of spectators who flock to Marstrand every year plenty to enjoy and talk about, from the rocks surrounding the natural amphitheatre that is Marstrand Fjord or from the VIP hospitality pavilions right on the waters edge.