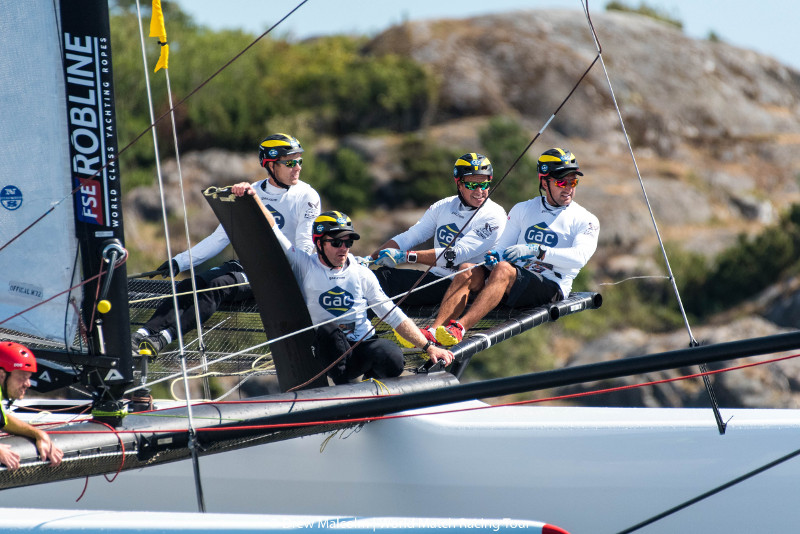 Risør, Norway (26th July, 2018) – Making its debut on the World Match Racing Tour this week, Risør delivered in spades on the opening day of Match Cup Norway. Qualification for the event’s 12 teams from eight nations was held on the narrow rocky finger of water off Risør in southern Norway. Today’s 12 races were completed in flat water and 6 to 15 knot winds that built gradually during the afternoon before abating. This, combined with the sailing area’s tight confines and much manoeuvring, provided a broad test for competitors.

“It was gorgeous conditions – fantastic for the spectators, really open racing because the course is long enough that there was a bit of time to get clear and out of sync and then maybe try to overtake,”observed Williams. “But it was a challenge because you had to do more manouevres to get out of sync in the first place and then there was the risk you’d lose out. Knowing when to attack and when to defend was a big thing today.”

Williams pulled off several come from behind wins, the most dramatic being in race five when he simply sailed around Guichard and Dackhammar, as they were locked into their own personal match racing. He pulled off a similar stunt in his final race today, another action packed race that coincided with the wind peaking and saw a collision between PJ Postma’s Dutch team and Nicklas Dackhammar’s ESSIQ Racing Team, which saw with the Swedish team retiring with a broken rack.

Williams felt that time in the M32 had helped in today’s variable conditions. “As the breeze changed through the day everyone had to step through the gears – that was good for us because we have more experience on these boats.”

During the lighter conditions of the morning session, Phil Robertson had banged in a consecutive series of four second-placed finishes, which he was more than satisfied with. It was only when his team got back out this afternoon in the fresher breeze that they managed to score their first and only bullet. Like Williams, this they had managed by battling their way up through the fleet. “We were pretty deep at the reaching mark and third or fourth around the bottom but then we picked off three boats off upwind. We got out of phase and picked up some nice shifts,” said Robertson. They finally rolled Australian Harry Price’s potent Down Under Racing team at the last top mark rounding.

Having a more up and down day was Australian Torvar Mirsky, who after lunch, returned to the race course with fire in his belly, scoring two back to back wins and coming close to a third. “The wind being up suited us and made it more simple,” Mirsky explained. “When the breeze is down, as it was in the morning when we got two fifths, we were struggling to get the angles right and the timings. We were doing well in the starts, but were able to capitalise on them a little more in the breeze, when it is easier to manage those first couple of gybes and you can find lanes a little bit more easily.”

Måns Holmberg’s results were also less consistent but included a start to finish win with a monumental margin in the lighter conditions of today’s second race. Like Mirsky, Holmberg is sailing with a new team, including Gilmour son Sam. Holmberg also enjoyed the mix of conditions. “It was awesome. 14-15 knots is tough [in M32s] because it is marginal reefing conditions. When it is this wind direction, this is such a good place.” However Holmberg also had to avert disaster: “I came around the top mark in the second last race and PJ [Postma] came in on starboard and we came very close to capsizing [as they avoided], which was pretty scary.”

After today’s racing, Risør, the new venue on the 2018 World Match Racing Tour has received a resounding thumbs up from the competitors. “It has a very similar feel to Marstrand with the rock boundaries everywhere and it’s a little bit longer than Marstand, which is nice for the fleet racing. It is perfect if it could stay like this all week,” concluded Robertson.