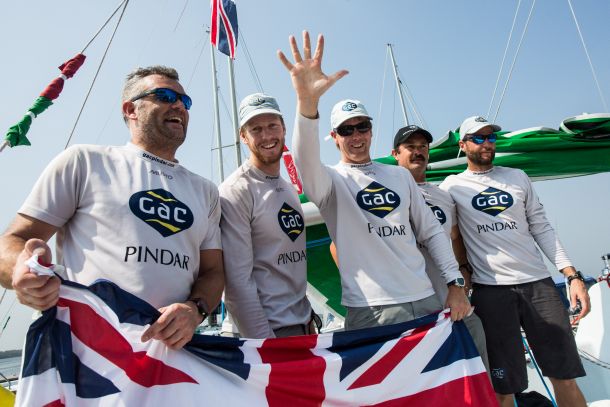 This victory will go down as Williams’s best yet after an enthralling season long rivalry with Taylor Canfield and his US One team. Williams went into the final event of the tour, the Monsoon Cup, knowing that if he reached the final of that event, the tour title would be his due to the 6 point lead he had accrued over the season.

Williams and his GAC Pindar crew secured their record fifth title and the accompanying $100,000 prize money courtesy of a convincing 3-0 victory over Eric Monnin in his semi final race. Williams went into the final day of racing 2-0 up against Monnin, safe in the knowledge that one race victory would be enough to claim the title.

After a tense pre-start against Monnin, in which the two boats came close to clashing on multiple occasions, Williams was eventually able to close Monnin off and take the advantage over the start line. From there Williams took control, leading for the entire race.

Williams went on to claim the Monsoon cup against Mathieu Richard in the final, comfortably beating the Frenchman 3-0. This represents another record for Williams, as no other skipper has won the Monsoon Cup on three occasions.

Commenting on his fifth tour title victory, Williams said: “It’s a really incredible feeling. The team deserve so much credit as we’ve been sailing very well all week. To have a record of 19-1 in such shifty conditions this week is pretty remarkable.”

“It really is a dream come true and something I couldn’t have imagined when I started sailing on the South Coast in the UK. When I decided to take up sailing professionally I dreamt of possibly winning one world title and certainly never thought I’d win five. This really vindicates my decision to choose professional sailing as a career.”

“I’d like to thank the crew for what has been an incredible effort over the 2014/15 season. We’ve worked incredibly well as a team over the year and it really is an honour to sail with them. I’d also like to thank GAC Pindar for all of their support in helping me claim this fifth world title.”

Andrew Pindar, Team GAC Pindar team principal commented, “It’s a fantastic achievement from Ian and the crew. The commitment, resolve and dedication that Ian practices has really shone through this week and he’s got the result he deserved. We’re absolutely delighted for him.”