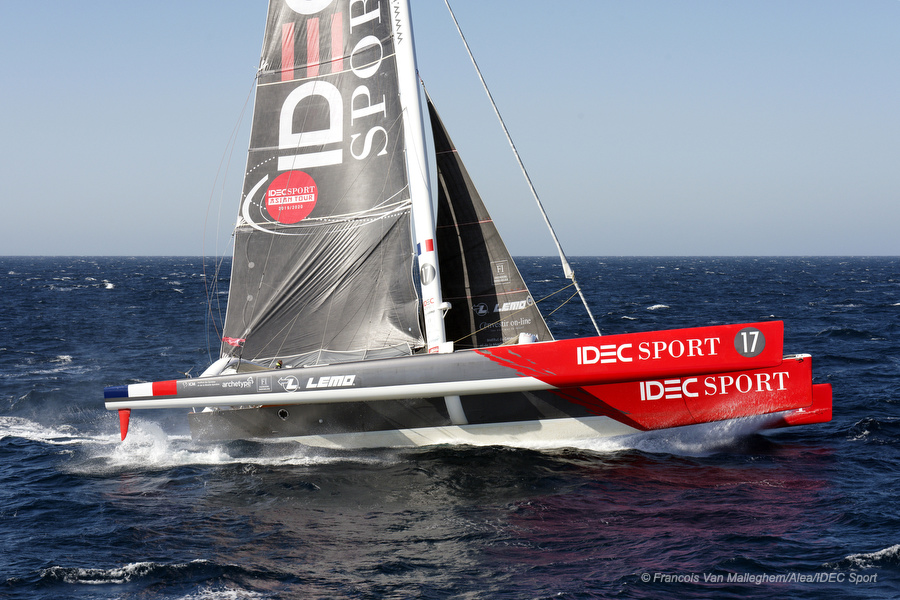 Often unfortunate when passing through the Doldrums, such as when the Inter-tropical Convergence Zone forced IDEC Sport to abandon its attempt at the Jules Verne Trophy two years ago, Francis is currently enjoying clear skies and a decent rate of progress upwind, while expecting to be slowed soon.

Joyon is gradually nearing the Equator, some 350 miles ahead of his bows this lunchtime and hopes to cross this imaginary line tomorrow, more than a day ahead of his Mauritius Route record from 2009.

This is cheering up the skipper of IDEC Sport, who is still 6000 miles from the finish. He can legitimately feel pleased about choosing the weather opportunity last weekend, as behind him huge areas of calm are developing around the Cape Verde Islands.

“We were right to set off last Saturday,” he insisted, praising the work done by his weather consultant, Christian Dumard.

“Not only are calms developing behind us, but we have also avoided the thunderstorms developing around the south of Cape Verde and found a way through during the night on what was practically the direct route to the Equator.

“In the past, I have often been punished in the Doldrums. I can remember sailing there with a crew in the Jules Verne Trophy, where we experienced some terrible storms, pitch black skies, winds swinging around 360 degrees and incredibly violent thunderstorms.

“For the moment, I’m still advancing at almost ten knots and heading into the wind. I expect to be slowed down later today and during the night.”

After six days of racing, IDEC Sport has kept a comfortable lead over the pace set by the second IDEC maxi trimaran, the Irens designed boat from 2007, aboard which Francis set the first reference time for the Mauritius Route.

In 2009, Francis crossed the Equator after 8 days, 5 hours and 9 minutes of racing, after covering 3350 miles at an average speed of 17 knots. This time, six days after leaving Port Louis, he has sailed 3168 miles out on the water averaging 22 knots. “IDEC SPORT is really fast,” he explained. “But my previous IDEC did well in light airs and was easier to handle with her lighter sails making manoeuvres easier.”

Francis is making the most of the decent conditions as he approaches the Southern Hemisphere. This year, his wife, Virginie was in charge of fresh supplies and Francis has not had to rely on freeze-dried food yet.

“With these clear skies and relatively steady winds, I have been able to take some time out to sleep and recuperate, which is a luxury in this corner of the world, where usually, the winds are unstable in direction and strength and prevent you from getting any rest. The boat is in perfect condition and that too is something I’m really pleased about after this first week of sailing.”