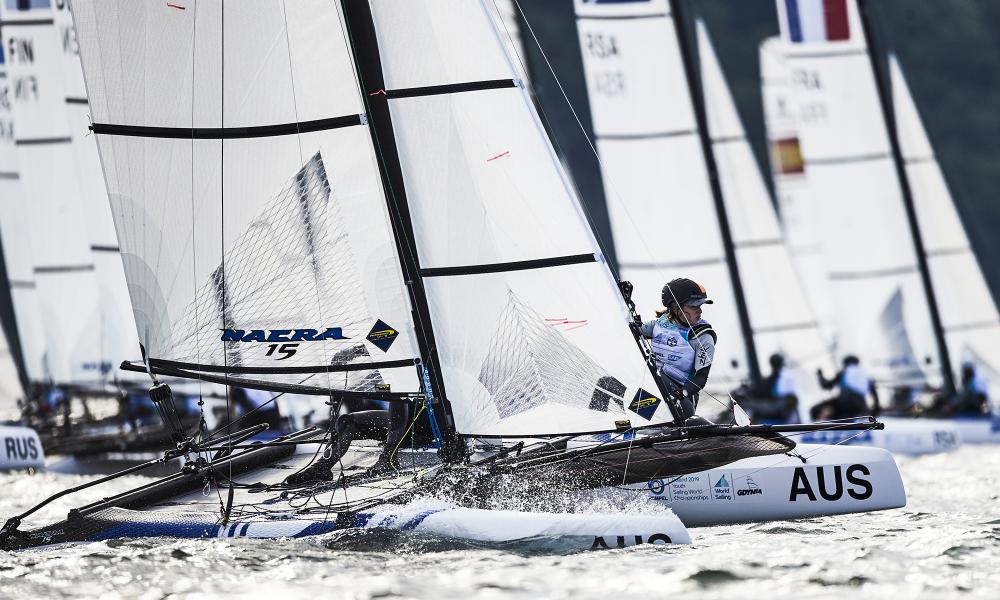 Will Cooley and Rebecca Hancock lead the Nacra 15 at the Youth Worlds. Photo World Sailing/Sailing Energy.

19/07/2019
The penultimate day of the 2019 Hempel Youth Sailing World Championships in Gdynia, Poland saw three gold medals decided ahead of Friday's final races.
There are double celebrations in the 420 fleets tonight after Seb Menzies and Blake McGlashan (NZL) and Madeline Hawkins and Yumi Yoshiyasu (USA) sealed the deal in the Boy's and Girl's division with just one race remaining. The Mixed Nacra 15 gold medal was also decided as Will Cooley and Rebecca Hancock (AUS) have an unassailable nine point lead.

All the teams have to do on Friday in their final race is stay out of trouble and avoid a non-discardable disqualification or penalty. The way all three teams have been sailing this week, it's unlikely any will faulter at the final hurdle and make such a mistake.

The points are significantly closer heading into the final day for the remaining six events with plenty up and downs shaking up the leaderboards.

The Girl's 420 perpetual RYA Trophy will head to the USA for the third consecutive year after Hawkins and Yoshiyasu picked up from where Carmen and Emma Cowles left off.

Consistency was king for the Americas and going into Friday their lead stands at 22-points. As their highest score is a seventh, they cannot be caught so will walk away as champions.

“We were crying on the way in,” the pair said enthusiastically, “We're really happy. We're just going to go out tomorrow and have a solid race but it doesn't matter because gold is wrapped up.”

They recorded a fourth and a fifth from their two races which was in their game plan. Hawkins commented, “Honestly we were going out there with a mindset to get top seven finishes. That's all we really needed. We just made sure we could chip off boats and weren't getting stressed about not being in first or being in 15th. We wanted to be as consistent as possible.”

That steadiness paid off as their rivals had up and down days. The race for silver and bronze will be fierce on Friday as teams from Spain, Germany, Portugal and Argentina are all in contention.

As one of the leading returning teams from the 2018 edition of the Championships, Menzies and McGlashan were touted as potential gold medallists in the Boy's 420 and they lived up to the billing.

Sitting on 26 points, their discard is a ninth which means that Martin Wizner and Pedro Ameneiro (ESP) cannot catch them on the race course. Only a non-discardable scoreline would see gold slip away.

From the day's two races, the Kiwis sailed their worst day of the event with a 7-4 but those around them also had mixed days. A fight is on for the remaining podium positions. Teams from Spain, Israel, Italy, Great Britain, Portugal, Poland, Switzerland, USA and Chile all have a chance to claim a medal.

The word consistency is one that is used often in sailing but is an apt word as keeping a consistent scoreline can reap rewards.

Across the week in the Mixed Nacra 15, Australia's Cooley and Hancock have not won one race but their consistency is unrivalled and they have not finished outside of the top eight once. With one race remaining, they have clinched gold as they hold enough of a points buffer over the French team to confirm the title.

The lead has changed on a daily basis in the Nacra 15 but the Australians prevailed.

Two points separate Titouan Petard and Marion Declef (FRA) and Silas Mühle and Levke Möller (GER) in second and third. It's not out of the realms of possibility for the chasing teams to overhaul the French and Germans but they would need results to go their way.

Americans Berta Puig and Isabella Casaretto are racing in their second Hempel Youth Worlds in the Girl's 29er. The pair won silver at the 2018 edition on their home waters and are within touching distance of gold this time round.

They posted a 1-2-1 on Thursday which gives them a 16-point lead over Maltese sisters Antonia and Victoria Schultheis. Two races will follow on Friday and one top eight result will confirm gold.

When asked if their 2018 experience helped them to be in this position, Puig was quick to acknowledge the benefits of going to two in a row, “We already knew what to expect,” she expressed. “This regatta is pretty different and sailing in an all-girls fleet is a different experience. Especially in the US as there aren't as many girls as we would like but getting the experience last year was very beneficial.”

Their two races wins and a second on Thursday was their most impressive performance of the week and has put them in pole position. On how they sailed so well, Puig said, “It was pretty light at the beginning with about 8 knots out there. It was about staying consistent and making sure that we were on the right shift most of the time, especially on the downwinds. We kept it simple as much as possible.”

Much like the Americans, Norway's Mathias Berthet and Alexander Franks-Penty are well positioned to take Boy's 29er gold. Two races remain and the Norwegians have an 18-point lead over Ville Korhonen and Edvard Bremer (FIN).

The race for gold will go down to the wire in the Boy's Laser Radial fleet on Friday. Zac Littlewood (AUS) claimed two seconds on Thursday to remove local hopeful Tytus Butowski (POL) from top spot but just one point splits the pair.

Their discards aren't comfortable enough for them to match race on the water but fireworks are expected and Butowski will look to draw upon his experience of his home waters to claim a historic gold for Poland.

Italy's Chiara Benini Floriani has led the Girl's Laser Radial fleet from start to finish. However, she has not been a runaway leader and it was only after Thursday's action that she has put some daylight in-between herself and the chasing pack.

Tied overnight on 17-points with Ana Moncada Sanchez (ESP), the Italian finished 12th and second from two races. The Spanish racer could not find her form and was black flagged in the first race before coming through in 12th.

Benini Floriani leads on 31-points followed by the Spaniard on 46, Shai Kakon (ISR) on 47 and Matilda Nicholls (GBR) on 49.

Three races will be sailed in the Boy's and Girl's RS:X on Friday. As it stands, Linoy Geva (ISR) is on top of the girl's division on 29-points followed by Holoise Macquaert (FRA) on 33, Yana Reznikova (RUS) on 34, Natasa Lappa (CYP) on 36 and Julia Matveenko (BLR) on 29.

France's Fabien Pianazza took three straight race wins on Thursday and has moved two points clear of Nicolo Renna (ITA). The French and Italian sailors have shared nine of ten race victories and will likely fight it out for gold in Friday's three races.

Racing is scheduled to commence at the earlier time of 10:40 on Friday 19 July as the 2019 Youth Sailing World Championships concludes.