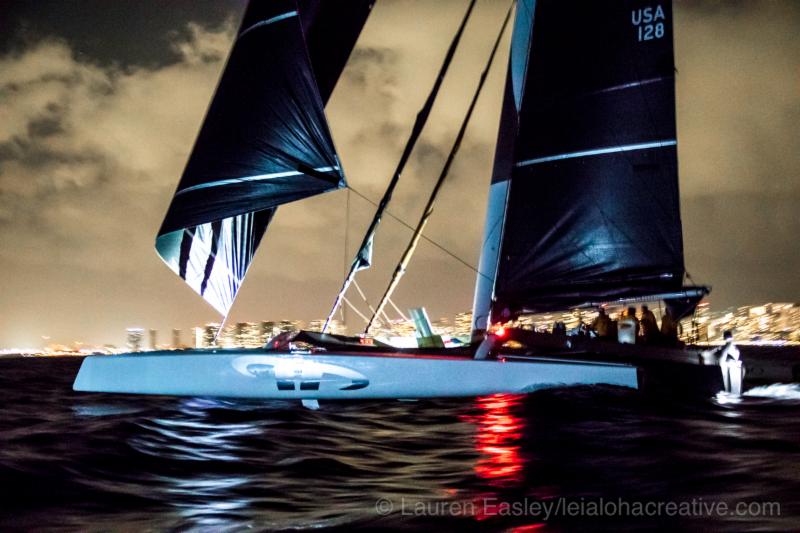 For over four days these teams battled with each other, one (Maserati) limping for a while due to impact damage after the first day of the race, but never giving up.

“Crossing the finish line was a great moment for us,” Carroll told local TV news teams. “It was four and a half days of anticipation to find out if we were going to beat out the competition, and it came down to a pretty close race in the end, so this was a great celebration.”

Asked about conditions leaving the coast, Carroll said “They were very different than they are here in Hawaii where it blows 26 knots every day; it was very light and variable. Our navigator (Anderson Reggio) did a great job getting us out of that hole and that gave us a leg up on everybody.”

This is Carroll's first Transpac: “Every offshore yacht racer’s dream is to sail do this race. This is my first time ever in Hawaii, so it's great to come and do this. The full moon was with us pretty much every night guiding us safely here.”

Argo team member, Brian Thompson, is a highly-experienced veteran of offshore multihull projects, and even he was impressed with this race.

“It’s amazing to be back here. I think this is my sixth time in Honolulu racing from California. I've got the course record with Phaedo and after the fourth attempt, being the first multihull to finish here on Argo tonight – which is incredible. It turned out the racing was really close. The start was incredible.

“There was an eddy off the coast of California which made it super light; much lighter than normal. At night it shut down and we were the boat that got out the best. We got out just before the wind shut down, so we got into the wind and extended through the night to have about an 80-mile lead. Four and half days is not a bad time at all for 2200 miles. We’re all chuffed to be here.”

Meanwhile, still charging towards the finish is the fastest monohull in the race, Jim Cooney and Samantha Grant's VPLP 100 Comanche from Australia. At 1500 Hawaii time, she was about 115 miles from the finish, travelling at 23.4 knots, so is expected sometime after sunset tonight.

The remainder of the fleet is enjoying beautiful tradewinds sailing, with many reports of fantastic sunsets and sunrises, moon rainbows, challenging squalls, and the like.

This account from Chip Merlin's team on his custom Lee-designed 68 Merlin: “Day 5 turned into an intense night after a few spinnakers went up and down as we dodged little black clouds and intermittent showers.

“Today, Day 6, the sun is out, nice trade winds are blowing, the crew is in good spirits and moments of offshore humor are more frequent. Last night we were treated to a special phenomenon when under the full moon a moon bow appeared. It is a white halo like ring similar to a rainbow, but without the colors.”

From John Miller's Beneteau 46, Tropic Thunder on their eighth day, a similar account: “As sailing goes, it is wash, rinse and repeat. The other watch seems to get all the sail-change fun. My watch gets all the cool sights.

“Overnight we had brief light rain that felt wonderful. The moon was once again bright and beautiful. We were treated to a full moon bow; rainbow made from moonlight. I have no idea what the actual term for it is. Google is not exactly available out here, so you are stuck with moon bow.

“We are starting to see schools of flying fish, which is really cool, and increasing amounts of trash, which is not so cool. There was a small squid that tried to make itself into calamari on the jacklines, but he wasn't quite successful, poor little thing.

“We are having a good time out here. Life is good. Except there were some hurting puppies this morning from the halfway celebration. When will they learn? Now starting to ration the Ibuprophen.”

Another story from the race course on board Scott Deardorff and Bill Guilfoyle's SC 52 Prevail is less jolly. A crewman had got his finger caught in a winch and sustained a compound fracture to his arm. The team received medical advice via sat phone from Hoag, the Transpac official medical assistance provider, wherein antibiotics were prescribed, but of a type not in the Prevail medical kit.

With help from Transpac Race HQ, an alert notice went to the fleet to ask if anyone had the specific type of drugs needed. Luckily, only 5 miles away was Vela, another SC52, owned by Steve Davis, Tim Dornberg and Clark Davis. They made the rendezvous with Prevail and the patient is reported to be in stable condition.

Another problem on the course has arisen on The Eddy family's Cal 40, Callisto, as their YB tracker is officially dead. The device had been behaving erratically throughout the race, so now Race HQ has directed navigator, Kerry Deaver, to report positions every 4 hours.

The tracker on Jason Andrews's J/125 Hamachi is working, and based on recent rates of progress, they are at the top of the leaderboard on corrected time. It's still a little early to make predictions, but Hamachi is in contention to win the overall King Kalakaua Trophy, a historic perpetual award named after the royal Hawaiian founder of this race, first sailed in 1906.

For all information including tracker and results: https://2019.transpacyc.com