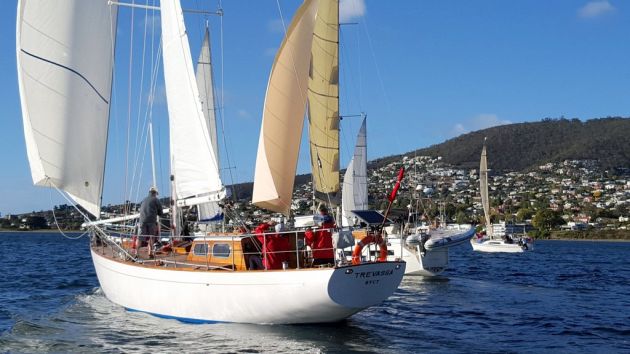 The classic yacht Trevassa showed she is still a fine yacht in a breeze. Photo by Michelle Denney.

The sheltered waters within Barnes Bay on Bruny Island proved more hospitable than the windswept open waters of the D’Entrecasteaux Channel yesterday afternoon for yachts contesting the Barnes Bay Regatta which winds up the summer sailing season in southern Tasmania.

With westerly winds gusts to 35 knots plus in the Channel, race officer Nick Corkhill wisely set a short course within the bay, but less than half the entered yachts elected not to race in the still difficult sailing conditions.

Originally the Kingborough Boating Club, organisers of the regatta, had planned on sending the fleet on a ‘touring’ race around several marks in the open waters of the Channel from Barnes Bay and return. The rest of the of 28 yachts that earlier in the day had sailed south from Hobart to Bruny Island in a pursuit race from Wrest Point to Dennes Point chose to find sheltered anchorages off the old quarantine station on Bruny Island and recover from a hard race down the river.

Division 1 winner of the Tassal Barnes Bay Regatta race, John Mills’ Nexedge revelled in the strong to near galeforce winds as she did when, as Micropay Cuckoos Nest, she won the 1993 Sydney Hobart Race in which only 38 boats out of 104 starters finished.

Yesterday morning, the 14 nautical mile pursuit race from Wrest Point to Dennes Point was sailed at a cracker with Richard Fader’s Buizen 52, Infinity a fast cruiser racer, sailing through the fleet to win the race overall.

With the WNW wind averaging 20 knots and gusting to 30 knots nearing Dennes Point, Infinity had an elapsed time of one hour and 36 minutes beating the Marten 49 Tilt (Peter Cretan) across the finish line by just under five minutes.

Last night the crews of about 45 racing and cruising yachts, along with motor cruisers, were celebrating the unofficial end of yachting season, and the end of daylight saving at a prize night ashore at the old quarantine station on Bruny Island