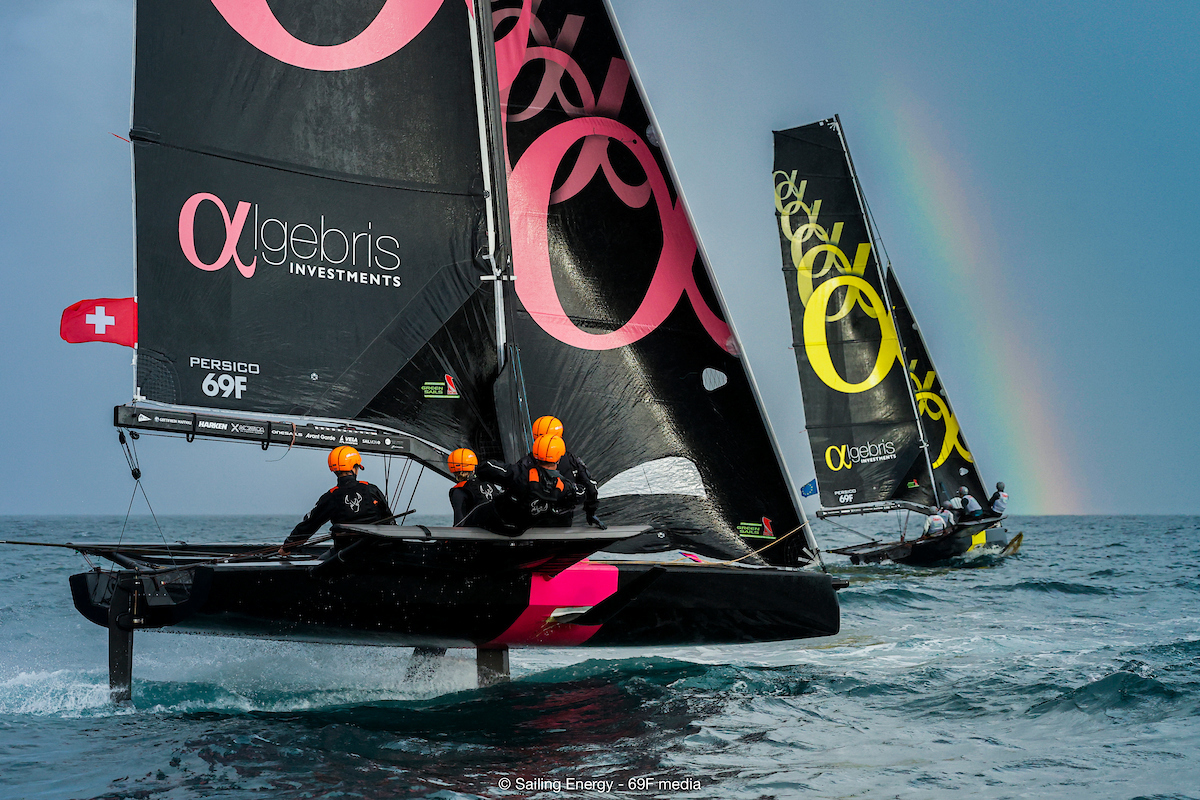 Gusts reached up to 26 knots on the first day of the final event of the YFGC. Pic - Sailing Energy / 69F media

The final event of the YFGC got underway today with two races held in the waters off Cagliari, Sardinia.

The competition will decree the overall winner of the circuit, who will receive a voucher worth €50,000 in addition to a wild card entry into the first event of the 69F PRO CUP – a regatta reserved for international professional sailors taking place from 12 to 14 November.

After a long wait ashore, the race committee only managed to get racing started after 3 pm, when a firm south-westerly wind of 14-21 knots, with gusts of up to 26, moved onto the racecourse.

The first races were extremely challenging and brought new course layouts. The committee chose an L-shaped course with a reaching start for the first race, while in the second it opted for a triangular course with an upwind start.

In the second race, the Argentinians chose the right side of the course on the upwind leg, rounding the mark ahead of the fleet. They maintained their lead for the remainder of  the course.

Teresa Romairone from Youth Team Argentina said, “Today it has been a very challenging day. It was incredibly gusty with a lot of waves. It was tricky to hoist the kite and the manoeuvres were very fast. We took some risk and it cost us a lot as we capsized in the downwind leg losing the gain we had. In the second race, we did a good choice sailing the upwind leg on the right side of the racecourse. We approached the top mark in the first place and we stayed in front until the end. We won just for a few seconds as the wind drop down in a while, just on the finishing line.”

Arnaud Grange from Okalys Youth Project said, “We like these pretty windy conditions, where we feel quite comfortable. In the first race, we tried to foil nicely but we realised that it was a little bit risky. The best mode was to foil slower than usual, avoiding to capsize and making mistakes.

“In the second race, we did a very good start. We were well placed and fast on the line, but the fleet on the rights side took good advantage. We made a good recovery on the reaching leg, foiling properly, paying attention to the gusts, and keeping the eyes wide open. Of course, we are happy but it’s only the beginning of the Grand Final. It doesn’t mean a lot, especially in this event where the points gained on the last days count for four. We are doing better than the previous races. So we are going in a good way.”

As weather conditions worsened over the course of the afternoon, the race committee was forced to suspend proceedings after just two races. The program will resume tomorrow, with the aim of completing the six scheduled races.