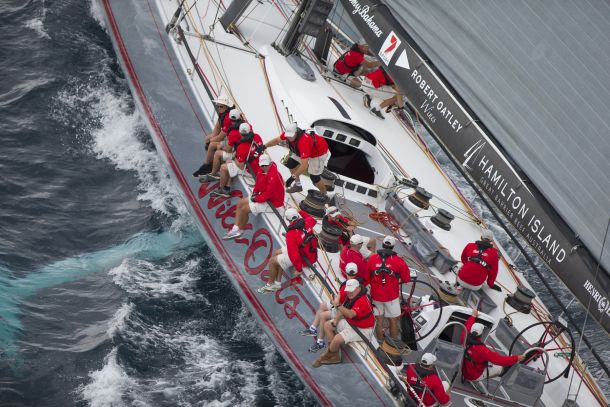 The bets are in place and the dice is about to be rolled for the big boats in the 2225 nautical mile Transpac race from Los Angeles to Honolulu… and it’s anyone’s guess who will win.

However, if you were a gambler, you’d have to consider putting your money on the silver bullet, the Australian supermaxi Wild Oats XI for fastest time. But, it would be a gamble. There is still no certainty as to the outcome of this event.

No doubt the biggest wager to date among the big boats has been made by 88-year-old Australian sailing veteran, Syd Fischer, with his 100-footer, Ragamuffin. He and the skipper, David Witt, decided to take the blue-and-white boat further to the north than any other of the 60 yachts in the classic, all in the hope of finding stronger and more favourable winds.

For a while it appeared the Ragamuffin team had made the right decision: they were sailing fast. But, earlier today that seemed to change when the weather pattern turned in favour of Wild Oats XI, and the similar sized American entry, RIO100, owned by Manouch Moshayedi.

Wild Oats XI, which came into the fray as the most successful yacht in the 70 year history of the Rolex Sydney Hobart Race, is competing as a joint American/Australian entry involving Roy P. Disney – a descendent of the legendary Walt Disney – and the yacht’s Australian owner, Bob Oatley AO. Not surprisingly, the supermaxi started in the Transpac as favourite for fastest time, and had there been a normal weather pattern for the event, that favouritism would have been justified.

But the weather hasn’t cooperated. There was lightning and thunder on the first night, and what little wind there was came from all points of the compass. It was a composition that made for uncertainty when it came to crews deciding what course direction they should sail. Fortunately though, Wild Oats XI’s skipper, Mark Richards, held his nerve. He stuck to his plan and sailed a conservative course from the outset, and because of this it was beginning to become more likely as the race progressed that it was the right decision. In recent days Wild Oats XI has been expanding her lead over her rivals.

But a new challenge emerged late today. Just when it appeared Wild Oats XI was beginning to experience the much desired north-east tradewind she sailed into a minefield of debris, the area of which was unknown.

“This race has been the trickiest ever,” said Disney, a veteran of 20 Transpacs. “The winds have been unbelievably fickle, but making the situation even more demanding now is this massive field of debris we’ve sailed into. We are seeing at least three bits of junk every minute – timber, fishing nets, plastic, poles that have broken away from commercial fishing nets; you name it, and it’s probably here. It’s so bad that we have a man stationed permanently on the foredeck to alert the helmsman of anything we might hit. That’s our problem right now, but it will be even tougher when it’s dark.”

Regardless, Disney said he was really enjoying the race, even though moving the massive sails across the deck was a lot more demanding than what he was used to.

“We are trying our hardest,” he said. “The guys are doing a mighty job trimming the boat for maximum speed around the clock. At this moment we have 12 knots of wind from the north-east and are sailing at up to 17.5 knots with the Code Zero headsail and a staysail set. We can only hope this is the first sign of the tradewind, because, if it is, we should be seeing more than 20 knots of wind overnight. That means we will be sailing even faster.”

With the fleet scattered over a wide expanse of ocean, and the big boats still having to cover more than 1300 nautical miles to the finish, distances logged today were not as relevant as they might be if it was a straight-line drag race to Hawaii. This was still a game of chance, even though Wild Oats XI did appear to have a comfortable buffer on her main rivals. She was 1332 nautical miles from Honolulu while Rio100 was 87 nautical miles astern. Ragamuffin, which was still well to the north, was more than 150 miles behind Wild Oats XI.