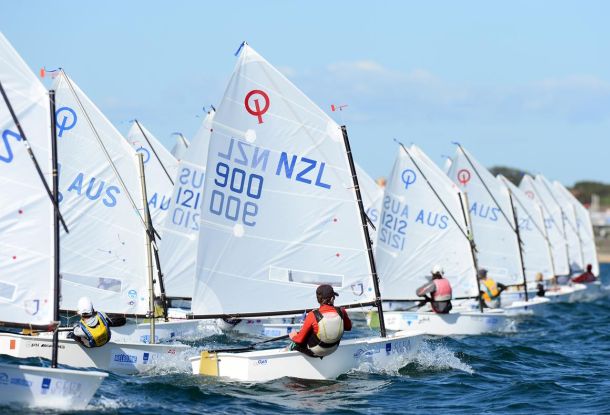 Invited and Youth class sailors planning to be part of the first ISAF Sailing World Cup – Melbourne at its new St Kilda location can from today enter online via www.sailmelbourne.com.au.

Entry and the Notice of Race went live today, Tuesday July 21, 2015, for the major event to run from December 7-13. Racing for the 13 Invited and Youth Classes starts on Wednesday December 9 and continues through to the gold medal showdown on Sunday 13.

The ISAF Sailing World Cup is the pinnacle global series for Olympic sailing classes chosen for the 2016 Olympic and Paralympic Sailing Competitions in Rio de Janeiro, Brazil. The opening Melbourne stage of the six part series is unique, being the only one to offer competition for Invited Classes alongside the key Olympic component.

Organisers are hoping to top last year’s 900 athletes with greater international representation given the closeness to the Rio Games.

Event director, Mark Turnbull, 470 gold medalist from the Sydney Olympic Games, appreciates the importance of young sailors being able to stand alongside their heroes on the beach. “You didn’t collect autographs from sailors when I was growing up,” Turnbull recalls. “We are very intentionally retaining the youth and invited classes and giving young sailors the chance to mill about the boat park with their heroes prior to heading out on Port Phillip pumped up having met and been inspired by Olympic greats and those in the making.”

Over the coming weeks / months there will be many announcements, including the entry process for Olympic classes at the ISAF Sailing World Cup – Melbourne, however the single biggest local change is the move from longstanding host Sandringham Yacht Club to a very public arena on the St Kilda foreshore.

Moving the event to St Kilda has been years in the planning, and the vision to take the event to the people has the full support of the International Sailing Federation (ISAF), Victorian State Government and City of Port Phillip.

“Moving the event from the confines of a yacht club into the public space changes a lot of things, essentially we have to build our own regatta site which we are doing using St Kilda’s Sea Baths building to offer hospitality areas, bars, cafes, restaurants and a gym,” Turnbull explains. The nearby Royal Melbourne Yacht Squadron will be the operations base and volunteer centre.

“Most of the on-water operations will stay relatively unchanged. We already have the worlds best race management here in Victoria and we are very confident when it comes to the continuity of delivering fantastic racing to competitors.”

Ashore, the move means sailors and the public can mingle, which is always tricky for race and regatta organisers given sailing is mostly away from land and out of sight.

This year’s ISAF Sailing World Cup and the Invited Classes Regatta will be in the public eye and set up similar to a triathlon with the competitors shore facility more outward facing. Road closures, come and try activities, LED screens and expert commentary from St Kilda Pier during racing are just some of the measures designed to engage the general public and build the profile of the sport’s stars.

Organisers understand the relocation will present different challenges in terms of security and parking but on the flip-side St Kilda offers a huge array of accommodation and eating options within walking distance of Cup headquarters. Once dinghies are unloaded at the venue and cars and trailers removed, there should be little need to use vehicles again.

ISAF’s new head of marketing and media, Australia’s dual Olympic gold medallist Malcolm Page, can see the advantage of bringing the best of the best to Melbourne’s shores and combining the influx of athletes and youth with everyday residents and guests to the city. “A greater concentration of competitors and their families staying and eating locally and adding to a festival vibe is going to be great for them and the resident community,” Page said.

The regatta will be conducted at St Kilda, Melbourne, Australia for all classes except the 2.4mR, SKUD 18, Sonar Classes and Liberty. They will race out of the Royal Yacht Club of Victoria at Williamstown, on the other side of Port Phillip.

A match-making service may assist sailors without boats wanting to charter and Ozi Opti has plenty of Optimists available for charter.

Entries must be received no later than midnight on October 1, 2015 to qualify for the early entry discount of 25%.