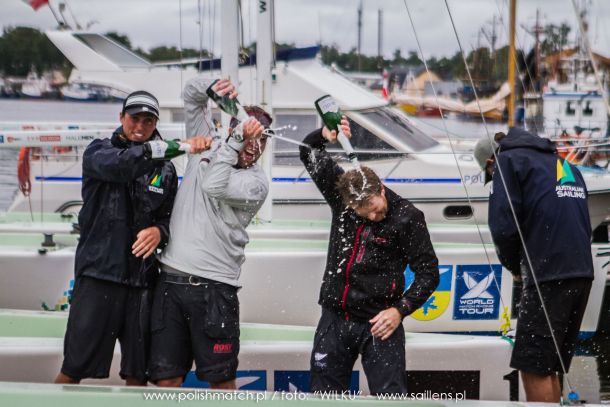 An insight into the life of professional sailors, pursuing their dream on a shoestring budget. This is the latest newsletter from Team Gilmour, the WA-based match racing team comprising David Gilmour, Rhys Mara, Jakob Wilson and Pete Nicholas:

This time it is Malin (Pete's girlfriend) hijacking this newsletter. Half of Team Gilmour (David and Rhys) took a bus to Prague to enjoy their 15 minutes of fame after winning the Dziwnow Match Race. The two other guys (Pete and Jakob) are in this very moment complaining about sore legs and enjoy themselves having a beer and playing cards on the ferry back home from Poland to Sweden. I am going to use this opportunity to tell you about the experience of being the shore crew for one of the best sailing teams in the whole wide world.

I am going to say it one more time, just because the satisfaction it gives me to say it. THEY WON!

Marie (Jakob’s girlfriend) and I had our own little adventure during the regatta. The first day we tried to watch the round robin down by the water. Because of the direction of the wind they sailed further out so it was hard for us to see anything at all. Twitter and the updates from the Polish Match Tour saved us. We choose to have a beer against a sunny wall down at the arena instead. Actually I think we had three. The boys ended up with four wins from four races, a successful day! Dinner that night was a lovely BBQ grill supplied by the Polish Match Tour.

Day 2 of round robin was a calm, pretty cold day so while the guys played asshole (a weird Aussie card game) against each other and bragged about earlier sailing successes, Marie and I decided to treat ourselves at one of the many spas in the area. Four treatments later we ran down to the arena just in time. TG was on top of the round robin and after they had a short debrief they deserved a beer.

The boys finished on 10 wins from a possible 11. The one loss was to local Polish hero Marek Stańczyk. I am pretty sure that they lost that race on purpose for the satisfaction of the crowd because they lost in spectacular fashion, with a black flag (disqualification) at the leeward mark right in front of a large group of sailing fans (plus the boys still all had smiles on their faces). A traditional Polish dinner was served that night at a local camping ground and as usual Marie and I solved world problems while the guys talked boats, boats and more boats.

The last day started with the quarters. Because TG won the round robin they didn't have to sail until semis. We spent the morning cheering for David’s younger brother Sam Gilmour and his team Neptune racing. After having a lovely lunch, TG finally went out for the semis where they went against Olli-Pekka Lumijärvi (FIN).

To be honest, it wasn’t the best day to be a spectator. The rain was pouring down and the temperature must have been below 10 degrees. We froze and were so soaked so after watching them winning against Olli-Pekka we ran back to our car. Instead of cheering with a glass of champagne in the sun, we sat soaked in the car and I promise you that in that very moment I was wishing so hard that Pete had chosen to be a poker player instead of a sailor.

We missed out on the final when TG went against Przemysław Tarnacki. When the guys finally came back to the jetty we simply had to ask them if they won or not. After the prize giving ceremony where the guys received the invitation for Energa Sopot Match Race and spraying each other with champagne a big day was over. Four tired guys with smiles on their faces sat down together and for the first time during the week they didn’t talk boats.

Apart from the rain, it was a lovely regatta. A big thanks to Maciek Cylupa and the Polish Match Tour for helping us out with great accommodation and for working so hard to arrange this qualification event to Sopot.

Stay tuned for their next event…