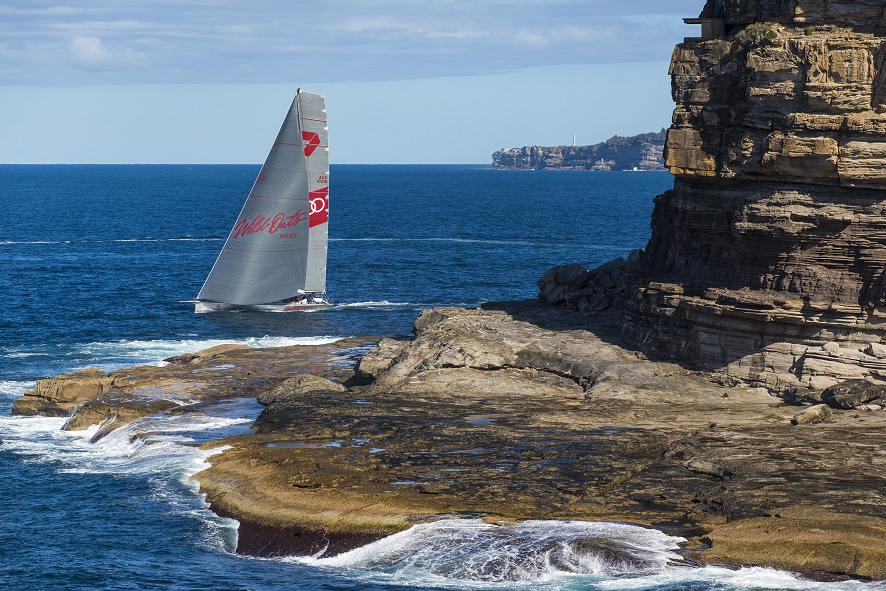 At 8am, Mark Richards had Wild Oats XI positioned 4 nautical miles south of Smoky Cape, travelling at 14.5 knots with 185 miles to make the finish line at Main Beach, Southport, while Scallywag was sailing at 15 knots.

Andrew Crowe reported from Scallywag: “Good morning! It's been a busy night with quiet fresh conditions. We had a small problem with our keel calibration which is now sorted. Can see Oats and closing…”

This is a first race for Wild Oats XI since her early retirement from the Rolex Sydney Hobart last year. As such, this is a first look at her potential since the boat was cut in half in a major modification late last year.

It is also a first look at Scallywag, the ex-Ragamuffin 100’s performance, since Seng Huang Lee purchased the 100 footer in May and spent time upgrading, including lightning the boat, extending the rig, making sails to match and making changes to the water ballast.

Prior to the race, Scallywag’s skipper, David Witt said: “We can’t wait to get out there and see how the two super maxis go against each other. The lighter conditions should suit us, so we’ll see.”

Paul Clitheroe is not aboard his yacht, choosing to celebrate his 61st birthday barging in Toulouse instead. However, he is keeping an eye on the race and not without sympathy for the discomforts of his crew, skippered by Mike Green.

“Just sent an email to Balance wishing them bon appetite, as they will have tucked into their yummy dehydrated cardboard food and are no doubt looking forward to the luxurious comforts a TP52 offers in the way of bedding, hot shower and toilet,” Clitheroe said. “They do look to be doing well; sticking to Ichi Ban is a really good effort.

“I’ve let them know I also have strategic challenges. I’ve navigated the wine list quite successfully, and as we need a new main (having pretty much destroyed the old one racing to Hobart) I passed on the Petrus and went for a lower cost Montviel. My next big challenge is which Sauterne with dessert….and which of the treats do I eat first?

The fleet has made fairly good progress overnight, but today will be a difficult one, with variable 10 knot winds reaching 20 knots offshore. These conditions will play mind games with the tacticians and navigators and sure to lure some into making the wrong decisions that will affect the outcome.

This morning, all boats were hugging the coast, none yet tempted offshore.

Three boats retired early on the first day; Concubine, Merlin and Secret Mens Business. Later in the day Les Goodrdige retired Wax Lyrica, after suffering engine problems, leaving 71 yachts racing from the original 75, and no further retirements have been reported this morning.