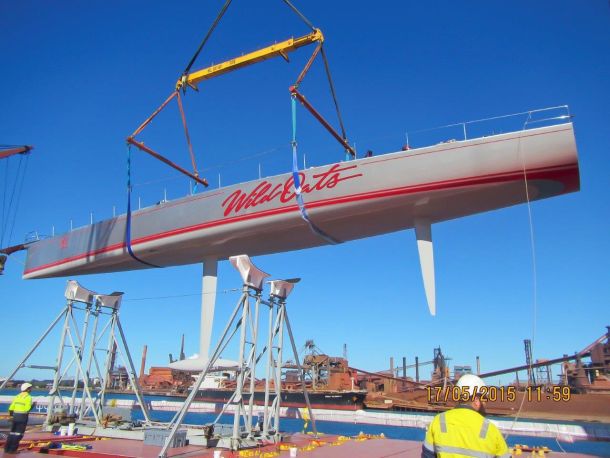 Wild Oats XI is loaded onto a ship for her journey to the Trans-Pac startline. Photo Rob Mundle.

Australia’s most successful supermaxi ocean racing yacht, Bob Oatley’s Wild Oats XI, entered the first stage of a new challenge today when she was shipped out to America’s west coast. The sleek, silver-hulled yacht is bound for Los Angeles to compete in the longest of the world’s classic offshore races, the 2,225 nautical mile Transpac race from there to Hawaii.

Wild Oats XI will arrive in Los Angeles in a few weeks with a reputation that is likely to see her installed as favourite for line honours in the race that finishes in Honolulu. The “big boat” division in which she will compete starts on July 18.

The 30-metre long supermaxi is the most successful yacht in the 70-year history of Australia’s premier offshore event, the Rolex Sydney Hobart race. She has been first to finish on eight occasions, won on handicap twice and is the holder of the race record time.

The Transpac campaign is a joint venture between Bob Oatley AO, and prominent American yachtsman, Roy Disney, the former vice-chairman of the Walt Disney Company. Disney has been a regular competitor in the Transpac race since the 1990s. He and his sailing master, Robbie Haines, will contribute half the crew, while the remainder, led by Wild Oats XI’s regular skipper, Mark Richards, will be Australian.

Disney and Haines travelled to Sydney last summer and sailed aboard Wild Oats XI in a 180 nautical mile coastal race before completing negotiations for the Transpac 2015 campaign.

“We are really looking forward to this challenge and sharing the race participation with the Americans,” Richards said. “It promises to be fun. We will be sailing upwind for the first three days; then it’s all downwind from there.

“Because the emphasis will be on downwind speed we have reduced the weight of the yacht by one tonne, 400 kilograms of which was gained through the fitting of a lighter keel ballast bulb. The horizontal hydrofoil wing has also been removed to save weight.”

Yacht transport specialists, Aurora Yacht Logistics, arranged for Wild Oats XI to be shipped out of Port Kembla, 45 nautical miles south of Sydney, aboard a special multi-purpose vessel. Once the yacht arrives in Los Angeles she will be motored south to San Diego and taken from the water so she can be rigged and prepared for the Transpac race.

She is scheduled to be back in Los Angeles by July 12 so crew training can commence.