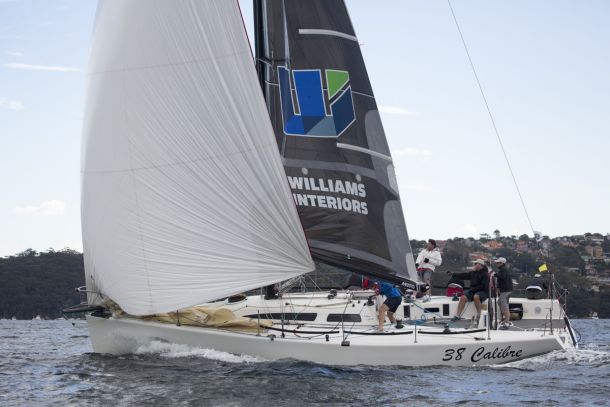 Sydney 38 Calibre coming away with first place in Division B. Photo David Brogan

The Sydney Harbour was a picture of Winter perfection for race four of the Cruising Yacht Club of Australia’s Land Rover Winter Series. Glassy waters on the harbours meant little action for sailors who have been battling windy, wet and cold conditions over past weeks of competition.

Principal Race Officer, Steve Kidson said it was a pleasant day, with little action, however enough puff to get everyone around the course twice. “At 8:30am we registered less than one knot which indicated that the day may be a quiet and slow one,” Kidson commented from the start boat. “By the start of the race at 11:30am it was up to eight knots and it fluctuated in and around that point for the majority of the race.

“We didn’t get any rain which was a welcome change and the sun even peaked through on a couple of occasions, over all it was a pleasant day of racing with the last boat finishing at 3:20pm,” Kidson ended.

MC 38 Assassin skippered by Clare Crawford, claimed victory by a little over two minutes in Division A1 from Balance (Paul Clitheroe) in what was a tight contest with Celestial (Sam Haynes) wrapping up the podium placing's.

In just her fourth time at the helm of the MC38, Clare Crawford was more than comfortable out on the Harbour in relatively easy conditions. “We have missed a couple of the Land Rover Winter Series races because we have been competing in various One Design Regatta’s,” Crawford commented. “It is nice to be at the other end of the results table after finishing towards the bottom end in other regattas.

“She (Assassin) is only nine months old so we are still learning how to drive her,” Crawford said. “My father, Robin is usually in charge so it nice to be learning everything and coming away with such a great result today.”

“The conditions suited us because it was light winds; we like the light winds,” Sommer reflected. “We got in front at the start and were able to pick up the right wind shifts. On the first lap we picked up a massive shift, about 30 degree’s, coming into Rose Bay which was huge, basically put that time between us and the rest of the field and kept the pace for the remainder of the race.”

From winning by 12 minutes to winning by 13 seconds, Division B was fought to the finish line with four Sydney 38’s fighting it out for glory.

Calibre (Richard Williams) came out on top winning with Next (Richard Holstein) in second and Thirlmere (Sally Warneford and Larry Jamieson) rounding off the top three just 25 seconds off the top spot.

“Today was tough with the low pressure areas and we only just got them at Shark Island on the final lap to beat them on the line,” Richard Williams (Calibre) said. “On the final turn we hoisted the kite and got the right tack which was fantastic because we had tacked horribly all day and fought really hard to get back up to contend first place.”

Weekly prizes are awarded to the top three placegetters in each division and include exclusive CYCA Land Rover Winter Series merchandise. One lucky division winner is drawn each week to receive a Land Rover Range Rover Evoque experience for a week.

Clare Crawford with Assassin scored this weeks’ quinella, winning the Evoque experience to cap off her Division A1 victory.

Race Five of the Land Rover Sydney Winter Series will be held on Sunday 24 May starting from 11.30am.