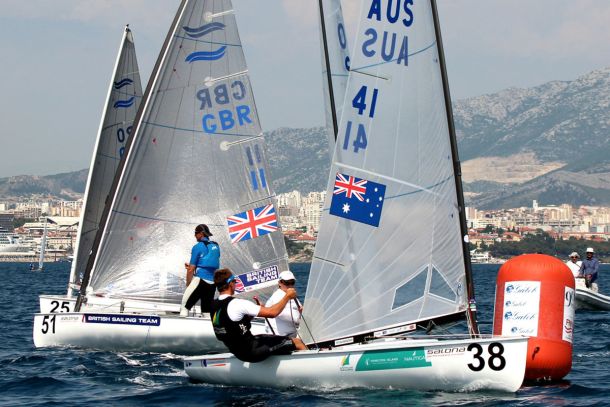 The day began with a long, hot, wait ashore in no wind and rising temperatures, and just when everyone thought the day would come to nothing, the flag was raised to send the fleet out for the medal race. The final race for the rest was abandoned as there wasn't enough time.

The medal race was started just in time in a stable breeze building to around 10 knots on the first upwind. Bjorn Allansson (SWE) started alone by the pin and sailed his own race to round first and lead at every mark to win the race. However the real interest was what was going on behind him.

The Senior title was between Kljakovic Gaspic and Junior. Initially Junior had the upper hand, but then let the Croatian escape and when they came back together at the top, Kljakovic Gaspic had a very small lead that he capitalised on to cross in fourth to take the title. Junior finally crossed in eighth to take the silver, while Zbogar had another great race to finish second and take the bronze, his fourth Europeans medal in row.

In the Juniors the battle was between Kistanov and Lilley, with Lilley looking to have the early advantage out of the start. However he touched the gate mark and after taking a penalty trailed behind the Russian. But it was all academic as Lilley, along with Ioannis Mtakis (GRE) were both judged over the line at the start and picked up a UFD score. So the defending champion Lilley had to settle for the silver, while Bugarin, who didn't make the medal race, took the bronze. In this fleet it is quite something to have two juniors competing as equals with the seniors, so both Kistanov and Lilley deserve a lot of credit for their performance this week.

Allansson said of the race win, “I made a pretty bold statement yesterday evening that I would try hard to win the medal race, so it feels it feels pretty good to be able to deliver on that. But on the other hand, all the other guys were quite close on points, so I could only really gain.”

“I wanted to be to the left of the fleet and the original plan was to just to start below the fleet but then Ed give me a run for that position. I wanted to mark that spot as mine so I ended up all the way down by the pin. It paid off pretty well. I had some good pressure out there while the others had a few tacks, which allowed me to punch forward a bit. I had a good flow, a good feel for the pressure today. In fact, it's been a really good second half of the event for me.” Allansson's win moved him up to seventh overall.

Kistanov was very pleased to have taken his first Junior European title. “It was a nice race. I read this morning, that Jake was just going to sail a normal race, but I didn't think that would be the case. I always do match racing with Egor in Russia so I was prepared for something like that. I didn't get a very good start, but with the U flag up I wanted to play it safe and then try and catch him on the downwind, or when he made a mistake. And that happened at the bottom mark when I got past, and I then just had to control to the finish.” Kistanov was unaware of the UFD so had to fight to the end.

This was his best result at a Europeans and his first ever medal. “My best result before was about 36th and fourth junior. This is my first medal, so it's very nice.”

What made the difference for him? “I joined Team Fantastica after the ISAF Worlds in Santander last year, and we started to train together in Miami. I am really happy to be in the team. I have a good boat, good sails and good coaches and am part of a very good team, with Bambi [Kljakovic Gaspic] and Michele (Paoletti] to spar against. They teach us a lot, and I am really happy with my coaches. We had three guys from the team in the medal race, and that is really great for us.”

Team Fantastica sailors took both the Senior and Junior titles. Kljakovic Gaspic said of the race, “Before the start I was just playing for the right hand side of the course. I did everything I could to start at the committee boat. That was my primary idea because there was a lot of current flowing from the starboard side of the course, so I wanted to play the right corner. So I played a bit with Josh and actually I had a decent start, but in the end the right side didn't pay, so I had to improvise to get myself out of there. I stayed close to Josh to stay in contact, and as soon as I had a little bit of advantage I capitalised on it and did my best to stay in front. Josh had the initial advantage but he didn't cover me, and he lost a bit, so I used his mistake.”

“This is my fourth European title in Split, after the Optimist and Laser youth and the Finn in 2010. It's a pretty consistent record. This was also one of our qualifying events for the Olympics.”

Speaking in general about the event he said, “I think it was a good event, We had a mix of conditions, so it wasn't favoured for anyone. We had some light days and some windy days. I think everyone had fun out there and I hope everyone found something that suited their style. I am really happy to have won, but it was not easy. Everyone was fighting hard. It was a very hard week for me but in the end a really good one.”