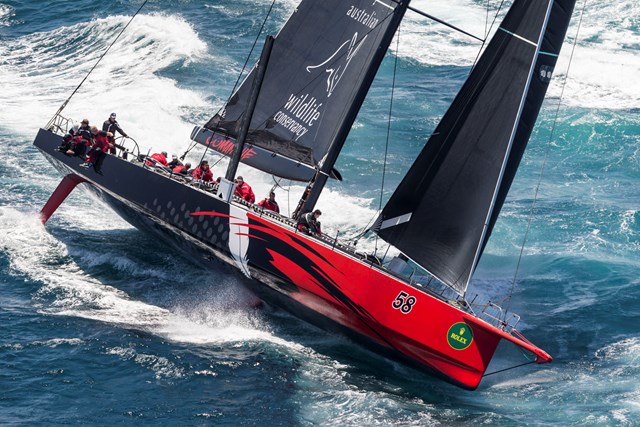 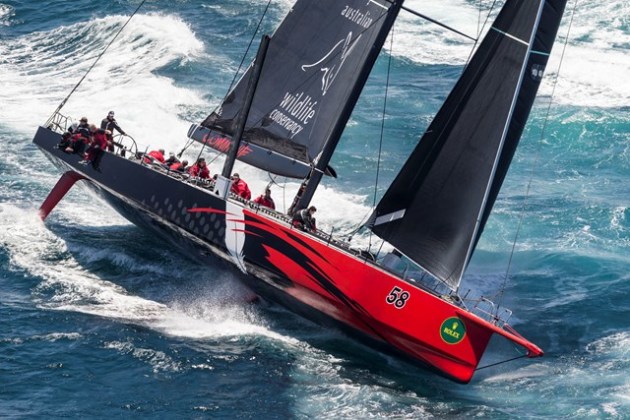 There is always tension on the docks at the CYCA on Boxing Day morning, but today you could cut the atmosphere with a knife. A difficult forecast promising a northerly run down the coast and then howling southerlies had the navigators on edge and with five 100 footers and the dark-horse Rambler 88 all eyeing line honours, the superstars of the sport were looking deadly serious.

A minor drama unfolded early when the official start boat, the powercat Aussie Legend, began taking on water. The dignitaries were transferred to another boat and the only problem was that the traditional cannons couldn't be accommodated. So the start was signalled with a horn.

In the half hour prior to the start, all is chaos on the water. The big boats which start on the first of three start lines, power through the rest of the fleet at speeds of over 20 knots, even before they hoist their headsails.

The yachts under 60ft and the 12 Clipper boats are forced to take evasive action as massive 100 footers bear down on them, and the middle-liners in turn encroach onto the small boat line. And if you line up too close to the edge of the runway, there is no-where to go – the thousands of spectator craft crammed along the harbour make sure of that.

With 10 minutes to go, Ken Read and the crew on Comanche were focussed as they made a timed run to the line. Rival Wild Oats had a reef in her main, which is not unusual, but Comanche had the whole sail up. As always, Mark Richards took the eight-times line honours winner and race record holder to the pin end.

“Ease, ease, ease again,” yelled Ricko to Mothy Jarvin, his mainsail trimmer as he tried to slow the boat with two minutes to go, alert to the fact that the outgoing tide was pushing the big silver boat down the harbour.

Comanche was mid-line when the horn went and could only watch as Wild Oats swung over on to port tack and crossed the entire fleet after a perfect start. Jimmy Spithill was working the grinders on Comanche as she and the other three super maxis followed the local favourite.

On Perpetual Loyal, Olympic champion and America's Cup winner Tom Slingsby was calling tactics and as usual he spotted something the others missed. A long tack on starboard to the northern side of the harbour saw Anthony Bell's black boat pick up a lift. Meanwhile Oats was trying to give Comanche bad air and got knocked on port tack over near Ladies Bay.

The result was that Loyal rounded the first mark in the lead, two boat lengths ahead of Comanche which had also snuck past Oats. Loyal's time was 10 minutes 21, much slower than Comanche's amazing 4.35.

As the big boats beat out through the heads, Wild Oats shook out her reef but Comanche was showing her speed. She was first round Mark Zebra, the offshore mark, and quickly had her spinnaker unfurled.

Unfortunately for Perpetual Loyal, her kite wouldn't unfurl and she dropped back quickly as Wild Oats, Ragamuffin and Rambler 88 swept by her.

But Comanche was gone. A full minute head at Zulu, she appeared to be in a different breeze as she roared away down the coast.

Further back it was the usual chaos, with the big boats Black Jack, Ichi Ban and the Clippers all sweeping out the heads in quick succession, followed by the TP52s, with Balance, Celestial and the Western Australian Indian all looking in good shape.

They were followed by the production boats and the little guys… all working just as hard as the super maxis, but obviously at a much slower pace.

Sad news came through from the race committee that, having travelled all the way from China, Ark 323 was the first retirement after a collision with another boat. All on board were safe but the yacht was returning to the CYCA. Cougar II, one of two Tasmanian entries, retired at about the same time with damage to her starboard quarter. The UK entry Lupa of London retired with unspecified damage and Peter Hickson’s M3 from WA has returned to port with a broken forestay.

The collision left Cougar II’s starboard transom stove in and broken, with damage to the bow of Lupa of London. Cougar II’s crew were too shattered to speak, the disappointment clearly written on every crew member’s face.

On Lupa, tactician Laurent Pages told of their devastation. “We were sailing on starboard tack from the start and three boats got locked together – we were in the middle with nowhere to go. We were left with the decision to run into the boat above us, or the one below us. This was the worst thing – the worst feeling – a stupid accident.

“The race director was very clear at the briefing this morning. The race committee told us all to take it easy at the start – there was a whole race to go. If everyone listened, this would not have happened. We are shattered – we came a long way. It seems so unfair,” Pages ended.

Attention now turns to the tracker as Comanche extends her lead and heads well out to sea, east of the rhumbline. But that means she will will be first to be hit by the southerly buster that is predicted for about 7pm tonight.

View the video of the start from Boats on TV here.