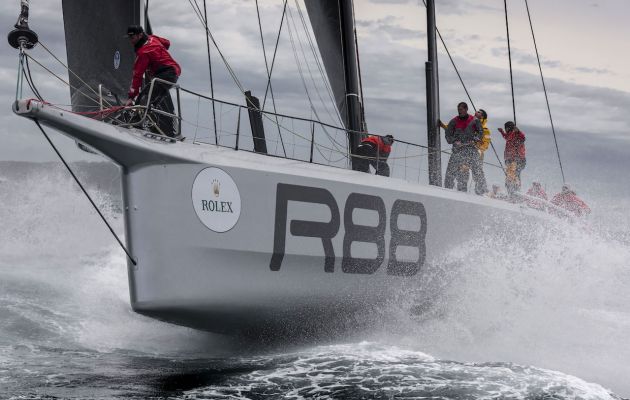 Rambler up in the thick of it. Credit ROLEX Kurt Arrigo

The first night of the 2015 Rolex Sydney Hobart has delivered plenty of shocks. The retirement of defending line honours champion Wild Oats XI with a torn mainsail and 2011 winner Perpetual Loyal with unspecified damage have left the front of the fleet a lonely place. In all there have been 10 retirements so far.

Perhaps the surprise package for those of us waking up and checking the tracker is that the 88ft Rambler has overtaken the 100ft Comanche and leads the race by 6nm. Both have passed the line off Green Cape where they are required to radio that both boat and crew are fit to continue. Comanche reported some rudder problems earlier in the night but appear to have fixed them and are sailing south.

Weather conditions overnight were bad, but not impossible. Gusts of o ver 40 knots were recorded early in the evening but the wind moderated to around 25 knots in the middle of the night before picking up again come daybreak. At Green Cape at 5am, gusts were still being recorded above 40 knots.

Behind the front-runners, Ragamuffin 100 holds third place ahead of the Italian boat Maserati and Queensland's Black Jack, the Volvo 70 which would have handled the conditions with relative ease.

Obviously IRC placings will change dramatically between now and the finish as the weather plays its usual role in upsetting some and delivering unexpected presents to others. However, as the dawn broke Rambler was holding the overall lead ahead of the Swiss entry Teasing Machine and NSW yacht Imagination. Then came Paul Clitheroe's TP52 Balance, Merlin and defending champion Wild Rose.

Among the big boats in Division 0, Rambler obviously holds the lead ahead of Matt Allen's Ichi Ban and Maserati. Division 1 is led by Balance with Primitive Cool and Triton making up the placings. In Division 2 it is Merlin, Uxorious IV and Yeah Baby. Division 4 – Teasing Machine, Imagination and Black Sheep. Division 5 – Wild Rose, Courrier Leon and Mayfair.

There is good news for the host club the CYCA with one of its members, Wendy Tuck, skippering the leading boat among the Clipper 70s. She has Da Nang Vietnam ahead of Mission Performance and the overall leader in the Clipper Round World Race, LMAX Exchange.

At this stage the southerlies are predicted to continue today and tomorrow, although they will be lighter. This should play into the hands of Rambler 88 which showed her windward speed during the SOLAS Big Boat Challenge. However, there are many more dramas to come in this fascinating race.

View the tracker for the latest positions here.