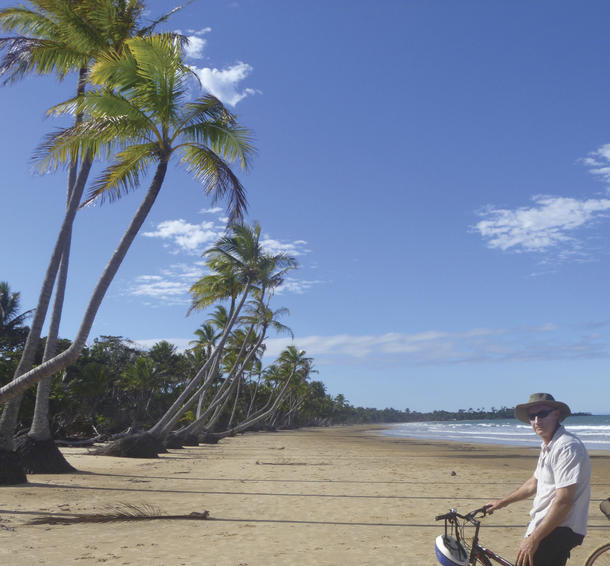 Every year when the SE trades are blowing, cruising folk make their annual procession along the east coast of Australia heading north.

Their usual destination is somewhere in Queensland’s far north, depending on delays along the way. Then it is a turnaround for the sail back, casually dropping into places they may have missed on the way up.

Dunk Island has become a popular anchorage for many of these yachties, because of its size and protection from SE winds and swell. But Dunk is only one of a close group of islands named by Captain Cook as the Family Group. An uninspiring name perhaps and overlooked by many, including charter boats. But the group has many attributes as a cruising ground, which a far more exotic name could not improve on.

There are eight islands, most have double names, given by the original inhabitants then European origins. They all lay within a morning or afternoon slow sail and in calm to moderate conditions. All have a common sand spit anchorage on the north west side, complete with beach allowing easy dinghy access. Being continental islands they have deep water around them and few navigational hazards. Many are national parks and contain uninhabited, undeveloped tropical rainforest on rocky slopes.

They are situated just north of the 32 kilometre long Hinchinbrook Island, also a national park. Hinchinbrook is a gem in itself with 1000 metre peaks and the protected waterway of Hinchinbrook Channel between the mainland. Possibly with one of the best cyclone holes on the entire coast if you get right up one of its numerous mangrove lined creeks. Unfortunately, there is limited access ashore to this spectacular place unless you strike it lucky with calmer weather and get around to beautiful Zoe Bay on the eastern side where magnificent scenery, walks and waterfalls await ashore.

If you drag yourself away from here and continue your migration north, you pass in this order, Brook Islands and Goold Island; then Hudson (Coolah), Bowden (Budg-Joo), Smith (Kurrumbah), Coombe, Wheeler (Toolgbah), Richards (Bedarra), Thorpe (Ti mana) and finally Dunk (Coonanglebah) Islands.

Hudson, Bowden and Smith forms a compact trio of its own, each with a tiny beach. Bowden and Smith being almost joined together by a shallow reef, do not try going between them! A deep channel with a swift tidal run is between these three islands and the larger Coombe Island; which is similar in size and shape to the next island north, Wheeler.

Again, shore access,, to slightly larger beaches is on both of the NW sides with camping allowed in these national parks.

Next is bigger Bedarra Island, which is privately owned having a resort on the SE approach, several freehold properties on the NE corner and a defunct resort on its NW side.

A bit north is Timana Island which is also privately owned, so it is worth remembering access to these two islands is legal, as in the rest of Australia, up to the high water mark but no further.

Dunk Island is the most northern and largest of the group, a mixture of national park and private ownership. The Dunk Island resort was operational until severely damaged by Cyclone Yasi in 2011. Since then it has changed ownership and been left in a dilapidated condition with only minor restoration. The air strip has recently been put back into use.

Inspection of what destructive power a cyclone has on mere man made objects can be viewed from the beach running along the front of the resort, which also leads to walks on Muggy Muggy beach and to the island’s summit Mt. Kootaloo. Views of the whole island group and further afield, make this a rewarding climb.

Brammo Bay is the usual anchorage in the predominant SE trade winds but if this changes to the east or north, safe anchorage can be found immediately on the SW side of the sand spit after giving it a wide berth. Or go even further past the small adjoining Kumboola Island, but do not attempt to pass between Dunk and Kumboola for it is all shallow reef. Also in this area is a shallow bank between Kumboola and Timana with plenty of navigable water elsewhere.

A small licensed cafe is intermittently operating adjacent the Dunk Isle jetty, where national park camping, toilet and shower facilities are available. Weekends are popular with boats, kayaks and even stand-up paddle boards coming across from the mainland 4km away. A water taxi makes regular daily runs to the mainland and sometimes to other islands.

These islands all lie opposite lovely Mission Beach on the coast which has a magical 12km of coconut tree-lined beach. Ashore there are the usual shopping facilities, which can be accessed directly off the beach in calm conditions or via a long hike from Clump Point to the north. This has a moderately protected anchorage in a shallow bay with boat ramp or jetty access to shore.

If you feel the need to escape the boat for a while, you can arrange to go white-water rafting on the nearby Tully River or you can skydive from a height of 3.5km, directly onto the sandy beach, getting a unique view of your floating home at anchor!

Having only recently moved up to this area ourselves, we are amazed at the sailing opportunities available on our doorstep. With our 25 foot trailer sailer, we launch at Clump Point and have a multitude of destinations all within a short sail of home. If this is not enough for your adventurous spirit, the outer Barrier Reef is only a 25 nautical mile hike out to sea where the choices of where to snorkel, fish or dive are numerous.

Beaver Cay is a possible anchorage we have used but most of the individual reefs here offer a unique place to drop the pick if the weather stays kind and you like the idea of anchoring out in the middle of nowhere, surrounded by nothing other than the Coral Sea. Common reef navigating skills are of course required, making sure you approach the coral with the sun high in the sky and optimally behind you.

Humpback whales conduct their annual migration north in sync with the southern yachtie fleet and offer sightseeing entertainment on the trip out or back from the reef. Many turtles inhabit these waters including huge Leatherbacks, which often pop their large heads up right next to your boat, scaring themselves as much as they do you. We have sighted dugongs at Hinchinbrook, Goold and off the sandspit at Dunk. Both crocodiles and barramundi are in the area but are as rare as each other.

Not rare are the box jellyfish in the wet season, November to April, but this is also cyclone season and outside of when you want to be up here mucking about in your boat.

Most of the Family Group of islands have coral around the shores but, due to the proximity of the mainland river system runoff, have poor opportunity for decent snorkelling.

If you voyage onwards to the north, the seven islands of the South and North Barnard Island group await exploration. Then the Frankland Island group with another five islands followed by Fitzroy Island and Green Island nearer Cairns. It is no wonder this is locally referred to as the Island Coast.

It is maybe a long way to sail from your home mooring or to haul your trailer sailer by road, but if laid back, uncrowded island cruising tickles your fancy, get in the Family way.