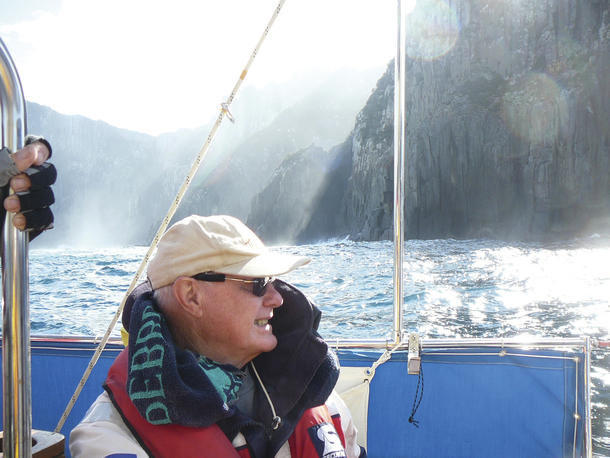 The camaraderie of the sea has many dimensions and this can be increased with membership to one of the clubs in which cruisers congregate.

The distinctive yellow pennant with a black cruising yacht under the press of a brisk wind is the burgee of the Coastal Cruising Club of Australia. It is to be seen frequently along the eastern coast of Australia and up the harbours of Port Jackson and Broken Bay. It has circumnavigated Australia and the world on several yachts, whose skippers have been recognised in the club’s prestigious awards.

The burgee tells of a club started in 1969 and noted for its passion for cruising, a convivial group with an appetite for all matters nautical.

The club’s journal, Mainsheet, can be sampled through the website and has recently celebrated its 500th edition. Mainsheet records adventures and misadventures both locally and on the high seas with recent reports of a transit of the Panama Canal and encounters with the strange creatures of the Galapagos.

Closer to home we have the pleasure of reading about cruises to Lake Macquarie, New Caledonia, Louisiades, Lord Howe, the Swain reefs, around Tasmania and over to New Zealand.

Experts contribute articles for Mainsheet which also offers advice from those of us just learning the hard way. Some of our members have built boats, some are marine and electrical engineers, but mainly our members are just ordinary people who love to mess around in boats.

As you might expect, there is much to talk about when the fun side of cruising is enjoyed with Sailaways to old favourite destinations in Port Jackson and Pittwater, further north to Lake Macquarie and Port Stephens. Sailaways attract a good proportion of our fleet of some 170 sailing boats.

A typical Sailaway has 10 to 20 yachts arriving at a nominated anchorage in time for a chat and a barbecue, or dinner on several yachts; where members bring their own.

Sometimes, a more formal note is struck, for example, the Pittwater group has a yearly ‘formal’ dinner on the sand at Hallett’s Beach and a land-based Commodore’s dinner where more that 100 members attend to applaud those receiving cruising awards.

The club has a low joining fee with modest annual subscriptions. This is achieved because it does not own the numerous assets that encumber many clubs with a shore-side racing focus.

Training responds to members’ needs for preparing the cruising yacht and crew for sea. In the past this has included seminars on cruising north, safety at sea, women on water and cooking at sea.

The fleet includes monohulls and catamarans, ranging in size from 27 to 53 feet, constructed from steel, aluminium, wood or fibreglass, from 80 years old to the newest. Some are custom designed, many are production designed and built by Beneteau, Bavaria, Adams, Cavalier, Jarkan, Hanse, Swanson, S&S, Lightwave and Seawind plus more.

Members meet monthly thanks to the kind hospitality of Sydney Amateur Sailing Club in Cremorne. Meetings typically attract around 50 members and all enjoy the repartee with entertainment including presentations on past cruises, technical inputs and talks by guests with a broad range of nautical knowledge. To help our members, the club has moorings in Port Jackson, Pittwater, Cowan Creek and Lake Macquarie.

If this sparks your interest and you want to know more, look out for the yellow burgee.