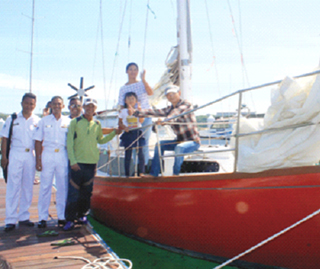 Kota Kinabalu: A young family from China can now add another chapter to their adventures at sea when choppy seas and a faulty engine inadvertently landed them at the Sepanggar Naval Base here, on Sunday.

The family of three, comprising 37-year-old engineer Zuo Fei, his wife Che Zhao Xia, 31, and their seven-year-old daughter Zuo Zi Xuan, arrived at the Navy Yacht Club's jetty at about 5pm without realising that they had actually entered into the naval base.

The episode unfolded when the trio decided to make a stop at what was initially thought to be a public jetty after they set sail from the Sutera Harbour jetty at about 11.30am.

“We arrived at the jetty and imagine our shock when told that we had actually entered into a military base,” said Zuo when met at the Sepanggar Naval Base on Monday.

He said they heaved a huge sigh of relief when after some questioning, they were not only allowed to berth at the jetty but also given food and accommodation by the navy.