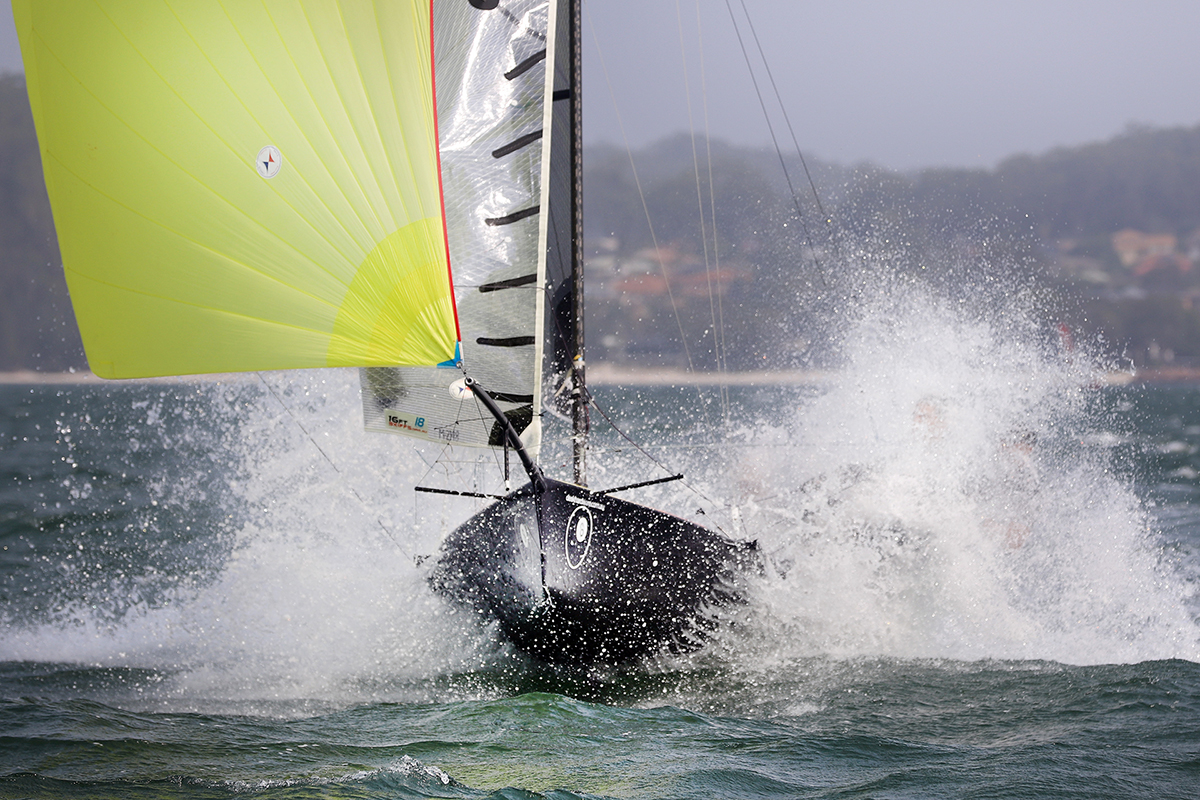 Although whipped by a southerly gusting to 25 knots, the cream nevertheless rose to the top during a challenging start to the 2020 Australian 16ft and 13ft Skiff Championships at Port Stephens NSW.

Most of the fleet selected their small rig as the breeze built, and all were glad they did as Race Officer Hugh Leicester nominated five laps of the choppy windward-leeward course in Salamander Bay. It then became a race of attrition as much as nutrition and stamina.

“It was a hell of a lot windier than most were predicting, and there was a point where I said to the boys, ‘this is going to be a slow grind’,” Turner said after the race. “When we saw opportunities, we took a metre here and there. We made most of our gains in the top left corner because the wind really squirts out of there.”

Turner and his crew mean business this year, having gone close in previous attempts.

“I’ve been on the podium plenty of times – too many times,” he adds. “This year we’re out for the win, and anything less will hurt. We’ll happily take today’s result because when you look around at the top 10, you realise it won’t be easy.”

“We were surprised to see the race time was around the 90-minute mark – it seemed longer, and felt longer than that, but Hugh Leicester obviously did a good job,” Mackie said. “It was a great race though, which came right down to the death. We just got pipped by Sutech on the final run.

“Our key was just consistency – coming into these major regattas we know that we have to stay in and keep chipping away.”

Hard luck story of the day belonged to East Coast Marine and Sail, which led until the final mark despite Joel Castle’s trapeze harness breaking with two laps remaining. They finally slipped to fourth, behind Manly’s Growthbuilt (Ryan Wilmot).

“Joel held on with two hands going up the beats, but in the end we just didn’t have the swinging power we needed,” skipper Matt Rhys-Jones lamented. “It’s a shame because it was a good breeze and we were going well.”

Former Olympian Nathan Wilmot had a similar story on early favourite IMEA, as Trent Barnabas also suffered a harness malfunction on the second leg when the boat was running second.

“We’ve had better days,” Wilmot admitted. “We were right in contention, but it’s just one of those things. The boat was going great and we battled on … there’s lots of regatta to go.”

Belmont fielded five top-10 finishers in a strong showing for the club, with Will Howard, brother Richard and Jamie Woods taking a hard-earned 7th aboard Burger Bro’s.

“Most of the boats you’d expect to see in the top 10 all made their way there,” Will Howard noted. “The boat-handling at the top of the fleet was outstanding but it was notable that the leaders didn’t get too far in front of the fleet. I think we’re in for a close regatta.”

Ten of the 51 starters failed to finish.