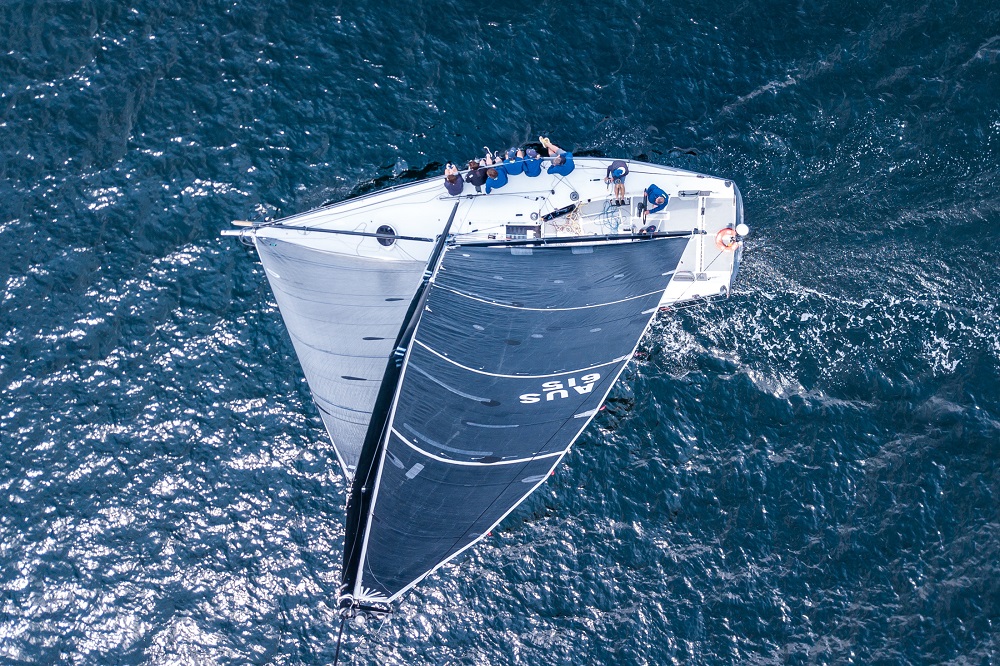 Matt Allen has claimed a third successive Australian Yachting Championship title today in Hobart, with Ichi Ban claiming victory in four races and finishing third in Race 5, with Race 6 abandoned for Division A.

Hosted by the Royal Yacht Club of Tasmania over three days, Allen, who won Division A with his TP52 from another TP52, Zen (Gordon Ketelbey) and the RP66, Alive (Phillip Turner), arrived at the Championships having won the 2019 Rolex Sydney Hobart.

“Our aim for the last six months was the Sydney Hobart, Blue Water Pointscore and this event,” he said, having won all three. “It was also nice to be part of the winning Southern Cross Cup team (sailed in conjunction with the 2019 Rolex Sydney Hobart) with Gweilo (Matt Donald/Chris Townsend’s TP52) and St Jude (Noel Cornish’s Sydney 47) too.”

“We couldn’t be happier. To defend the Championships successfully is a real thrill. It was the best fleet in some years. And to sail in the challenging conditions on the Derwent, you had to be on your game all the time. It was great to see support by Sydney Hobart boats and the locals.”

The Sydney yachtsman acknowledged his competition: “It was a real tussle, including yesterday and today with Zen. We had really tight racing with them and the big boats – Alive and Chinese Whisper (David Griffith). It was great to see Chinese Whisper hit her stride today – she took off and was just gone,” he said of the boat that won Race 5.

Allen said, “The Championships were well organised and well run by the Royal Yacht Club of Tasmania. They went all out and put on food for us every afternoon, making it easy to catch up with the other crews.” Others concurred, made to feel very welcome at the Club.

In Division B, two Farr 40’s fought throughout for the overall win. The local favourite, Greg Prescott with 2 Unlimited, and Western Australia’s Enterprise, owned by Anthony Kirke, stayed within three points of each other throughout. Keiran Mulcahy’s Soozal (NSW) was always in the mix too.

Following today’s two races, 2 Unlimited prevailed by two points with a drop in place. So close were the two, they finished equal second in Race 5, and then Enterprise won the final race from 2 Unlimited. Soozal came in third overall, two and a half points behind Enterprise.

“The competition was fantastic; very close the whole time, basically the same as it was in the Sydney Hobart,” Prescott said.

“They’re good friends on Enterprise; in fact one of the crew is staying with me. Those guys pushed it all the way. After Day 1, we decided not to cover each other all the time. Soozal is pretty good and had Chris Nicholson on board, so we had to watch them.

“One of my best friend’s is Twirler (Darren Jones) and I saw one of my other friend’s, Steve McConaghy at the dock, so it was good to have them with me. And my son Lachlan, who also did the Hobart with me.

“We’re very happy we had such a great regatta and a great few days of sailing. And it’s a good thing for mainlanders to bring their boats to Hobart for a bit more sailing,” Prescott ended.

A similar situation occurred in Division C, between John Warlow’s Beneteau First 40.7, Ocean Crusaders (Qld) and the local boat, Drew Nathan’s MDB Whistler, which finished one and a half points apart in first and second place respectively.

The Queenslanders prevailed over Whistler, with another Tasmanian boat, Shaun Tiedemann’s Sydney 36 C/R, Philosopher (Tas), rounding out the top three with a drop in place.

Warlow commented, “We’re pretty happy. We weren’t sure how we’d go, but thought we’d have a crack anyhow. The competition was fabulous and the fact that the win came down to the wire was incredible. The Tasmanians gave us a hard time,” he said of Whistler and Philosopher and Midnight Rambler sailed a great race yesterday.

“We’ve had a ball here with everyone else and stayed together as a team. It was a huge amount of fun.”

RYCT Commodore, Tracy Matthews, thanked all competitors, the race committee and the volunteers for making the regatta a success.

For results and to follow the Australian Yachting Championships, please visit: www.yachtingchamps.org.au