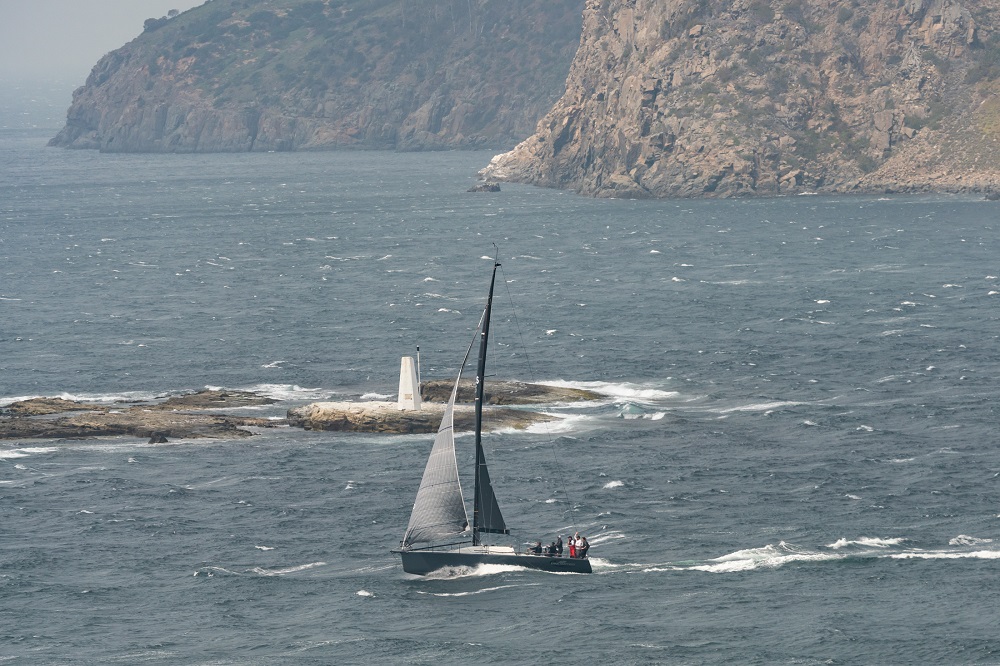 After yesterday’s light airs, some yachties were heard saying “Geez we’d love some more breeze”, and as the old saying goes, ‘be careful what you ask for’, as Day 2 was a completely different beast, with sudden high winds testing competitors and boats.

For local sailor Drew Latham, who is new to yacht racing, the conditions were about as difficult as they could get. Latham, from the Derwent Sailing Squadron, bought the MBD36 Whistler in July. He is more at home on a Sharpie.

“Today was about survival. It was a pretty challenging day. We had to drop the main down once because it was too gusty. It’s an inshore main with just one reefing point,” Latham explained.

“Coming back from Clifton Beach to the Iron Pot was the hardest part of the day. We saw 41 knots and were sailing on a short deep sea. We broke the headsail halyard and the heady went over the side. We had to get it back and run it off a kite halyard.

As Ed Psaltis predicted yesterday, his Sydney 36 Midnight Rambler was at her best today and they won the race, but Ocean Crusaders leads the division after finishing third. Whistler is in second place, but on equal points with the leader.

Latham says tomorrow’s return to windward/leewards will be just the ticket. “We had a really good day yesterday; the boat likes the lighter weather and it suits us better,” he said.

Life was not so simple on the TP52, Quest. Sailing Master, Mike Green, explained: “The wind got up to late 40’s and we were doing 29 knots of boat speed. “It was variable at the Iron Pot – the breeze was from every direction and every strength.

“We rounded the Iron Pot in strong winds, gybed, got the spinnaker sheet caught and wiped out in 35 knots. The runners tore the main to shreds and we blew up the A2 spinnaker. We’ve had to apply to use our offshore main and a different kite,” Green said.

“We lost Micky Slinn over the side, but he was still hanging onto the sheet. Three guys dragged him back on board. He’s got a big dent in his leg from the lifelines now.

“The day was worse than anything we saw in the Sydney Hobart – 60 percent stronger and it happened so quickly,” Green, from NSW observed. Others agreed.

Ketelbey from NSW told how they kept up with Ichi Ban, until the Derwent: “We were with Ichi Ban all the way. We were 100 metres from them at the Iron Pot, but reaching down the Derwent they took off and left us.”

“It was pretty wild. We didn’t have a reefing main, so had to sail with it full. We saw 46 knots on the wind instruments. We tore the main and broke battens and there were a few bruises.”

Ichi Ban left the day with four straight wins in Division A, while Zen and Alive, a RP66, are fighting for second place, just one point apart on 14 and 15 points respectively.

In other news, well-known local sailor, Colleen Darcey, had a fall on Young Lion in Division 3, She was transferred to hospital for assessment for possible broken ribs. RYCT Commodore, Tracy Matthews, said there was a medically trained crew member sailing on Young Lion who attended Darcey until the mark boat took her ashore to Cremorne where an ambulance was waiting.

The Commodore said, “The mark boat monitored the fleet whilst in the race area and after dropping Darcey ashore, provided a sweep of the fleet for the return to Hobart.”

Division A yachts contested a 50 nautical mile course to the Isle of Caves, passing Betsey Island, after starting off RYCT on the River Derwent, where they also finished. Divisions B and C were on a shorter 36nm race to a laid mark and then on to Clifton Beach. Racing started at 10.30am.