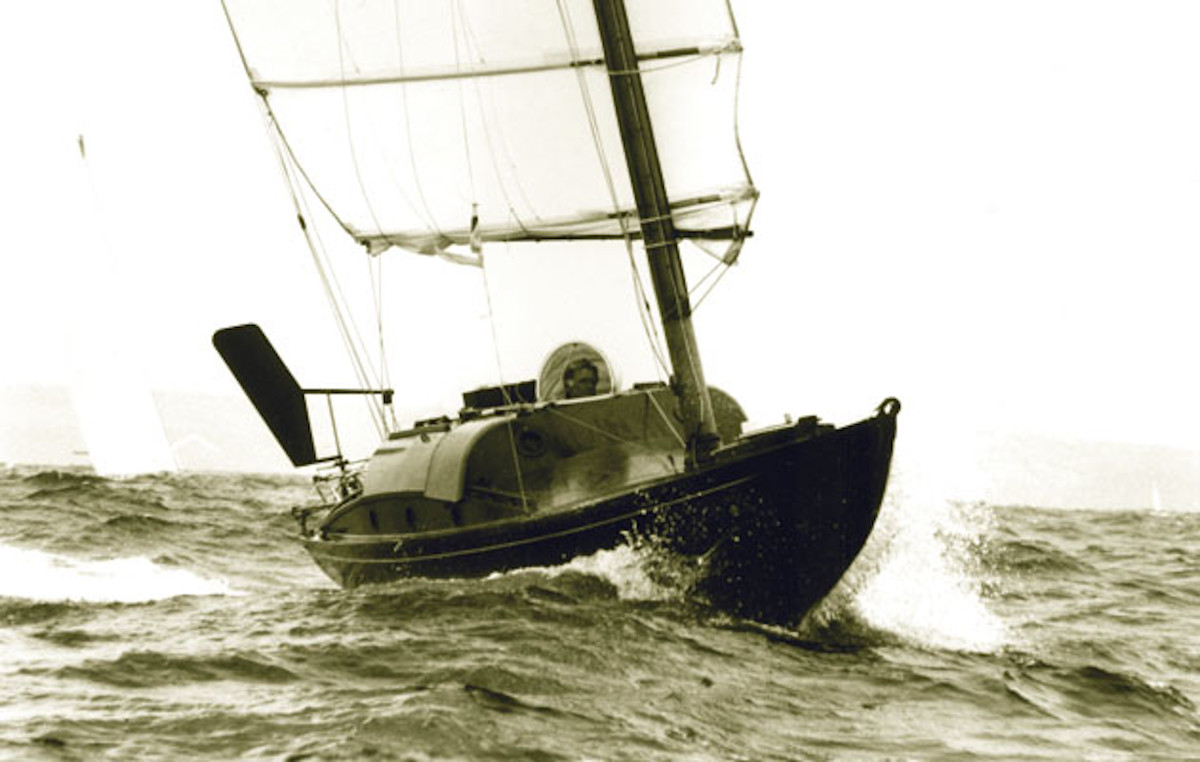 When sailing single-handed for extended periods, the greatest problem was, in the past, who was going to helm and keep watch when the skipper had to sleep?

This was an intractable and potentially dangerous situation. So it is no wonder that long-distance solo sailing events are a relative newcomer to the Ocean Racing diary.

The first solo race across an ocean was held as late as 1960, The Single Handed Trans-Atlantic Race.

The concept of the race was developed by a decorated British war hero, Lieutenant-Colonel Herbert George “Blondie” Hasler DSO, OBE, and the idea for the race arose after he had invented the first wind vane auto-steering system, enabling yachts to maintain their course without the skipper having to be hands-on for 24 hours per day.

Sponsored by the Observer newspaper, the race became known as the OSTAR.

Although there have been changes in the race’s sponsorship and name, the OSTAR continues to be raced every four years. Nowadays, it is officially known as the Original Trans-Atlantic race and is only for amateur sailors.

Professional were meant to start competing in the newly created the TRANSAT race which has been held since 2004. Held initially over a very similar route (to Boston rather than Rhode Island) meant the OSTAR slipped forward by a year to 2005 for the first time since 1960. OC Sports bought the rights to use the history for the OSTAR in promoting The TRANSAT, a race that never really took off. After 2008 edition (to Boston) the 2012 edition wasn’t held. In 2016, only 25 boats took the start to a course to New York and the 2020 edition, meant to go to Charleston, was cancelled. Now officially called The TRANSAT CIC after its main sponsor is due to be held in 2026 next, but little seems to tie this new event to the history of the OSTAR.

In the original event, there was a great number of people who expressed an interest in entering the race, but in the end, only five yachts set off from Plymouth, England to Newport, Rhode Island, USA, with one of these yachts skippered by Halser, himself.

The winning yacht was Gypsy Moth III skippered by Sir Francis Chichester, who later increased his fame by becoming the first man to circumnavigate the Globe single-handed with only one stop in 1967 (he had intended to complete the voyage non-stop but damage to his boat meant he had to stop to make repairs). Hasler came in second.

The five yachts all completed the crossing, with Chichester crossing the line in just over 40 days and the last boat in took 74 days.

As a point of interest and comparison, the fastest crossing, to date, is 8 days 8 hours in a multi-hulled yacht and 12 days 2 hours in a single-hulled boat (an IMOCA 60 class).

The next notable long-distance solo race was the 1968 Sunday Times Golden Globe Race. The first solo circumnavigational non-stop race. Of the nine yachts that started, only Sir Robin Knox-Johnston completed the race and so became the first man to circumnavigate the Globe, non-stop and unassisted.

As technologies have developed, the interest in solo yacht racing has increased. Today’s solo yachtsmen and women have the benefit of electronic systems like Satellite tracking, Global Positioning Systems and Satellite communications, together with helm and watch-keeping technologies like AIS, which will warn a ‘non-attentive’ skipper as to nearby shipping etc., and of course, he or she will still have use of the auto-helm technologies first developed by Hasler.

Today, there are many solo yacht races held throughout the world. If this were a book, then I could go through them all, but for the benefit of this article, I will highlight some of the best known and more interesting races.

GLOBAL RACES
The Vendée Globe is arguably the ‘Formula 1’ of global solo yacht racing. A non-stop circumnavigation, in boats that incorporate some of the latest technology available. These competitive yachts can readily cost over €3 million. The race is for established professional sailors and each of these will have a major sponsor(s). Held every four years since its founding in 1989, this race has become the monopoly of the French. The next edition of this race is in 2024.

The Golden Globe Race is a recreation of the 1968 race won by Sir Robin Knox-Johnston (q.v.). The boats have to be between 9.75m & 10.97m full keeled and designed before 1988. In an effort to recreate Knox-Johnston’s achievement, the participants will not be allowed any electronic equipment (apart from limited safety equipment) and will have to navigate using paper charts, sexton & compasses and have to keep handwritten logs! This sets off September 2022.

The Global Solo Challenge is not a race per se. This solo circumnavigational challenge, is for a multitude of classes of yachts within certain parameters. This event should be quite unique in that the boats will set off in groups based on their formulated handicap, with the first sailors setting off a full eleven weeks before the ‘fastest’ boats. The organisers hope that this will bring the excitement to the finish rather than the start. In contrast to races like the Vendée Globe, the organisers of this event have taken an ecologically-based viewpoint and encouraged the participants to use second hand or already owned yachts.