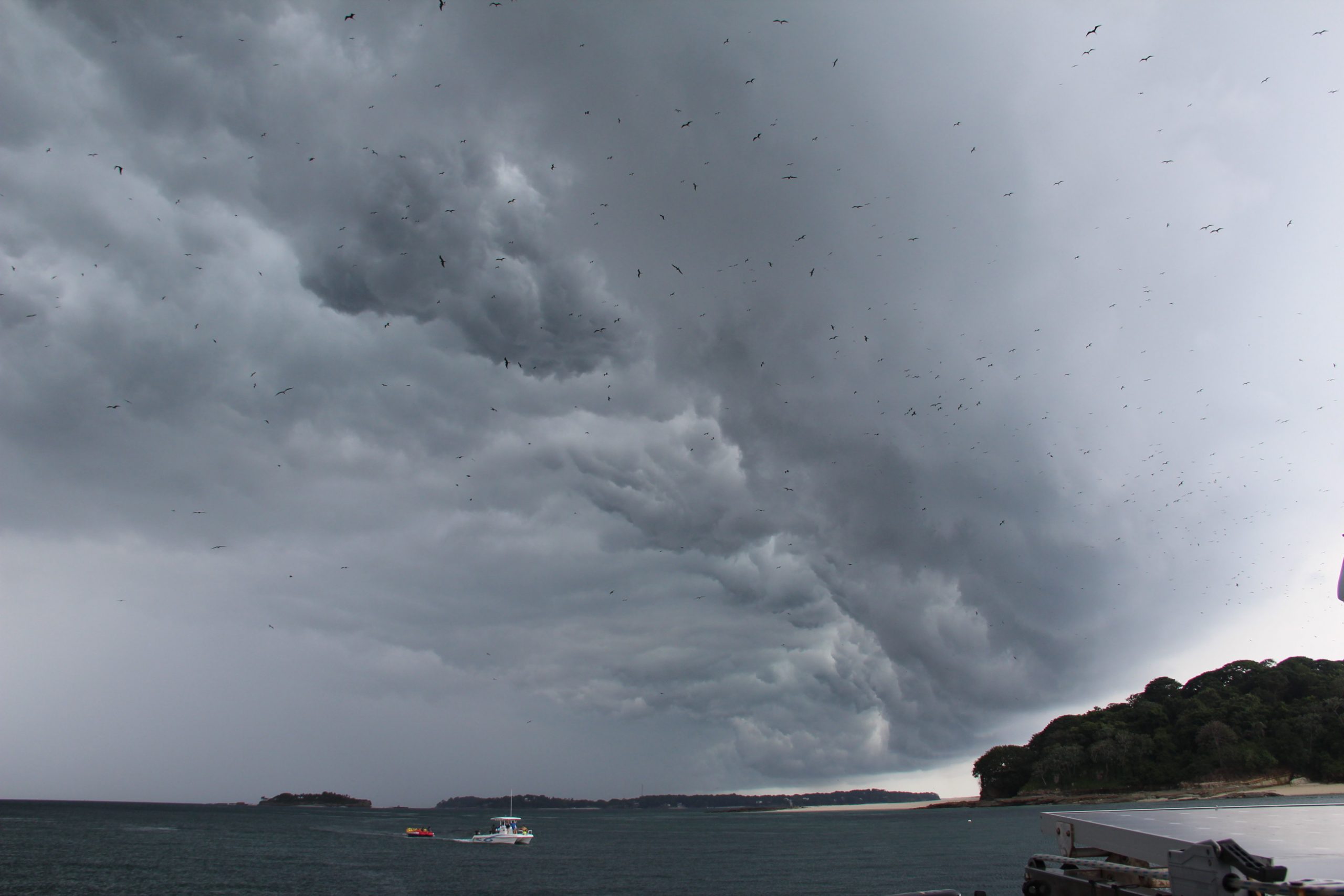 We are sitting at anchor in the south arm of Port Clinton Queensland, which is not a port at all in the usual sense. Not a building, road, wharf or beacon anywhere.

The wind has been howling through at 25 to 30 knots gusting 35+ for two days and indications are we have another day and night to go before it moderates.

We had crept in just before sunset after an awful day corkscrewing north from Great Keppel Island in a grumpy sea. Its remoteness and rugged beauty was a welcome sight as we picked our way between the sand banks and found a spot for the anchor beneath Mt. Flinders.

No one who sails is indifferent to the wind but rather has a passionate love/hate relationship with it. To those whose boat is their home it is like a teenager. Its moods and petulance make you angry, happy, frustrated and sometimes serene, but you can not get rid of it. You just have to love it anyway.

At times it feels like a puppeteer and we dance to its strings. With gentle seas and steady wind we skip along feeling like masters of our own destiny, but in a flash it can have us wrestling a flogging sail and cursing in fluent piratese, a language our partners never even knew we knew but pick up with incredible ease.

In the depths of our salty souls we have a deep respect for it and know it enables us to enjoy this amazing life.

There is a magic and romance about the age of sail. Nothing quite captures the mystique of faraway places like old sailing ships with the ability to travel there on the wind. They still draw people to them and this was part of what we wanted when we went boat hunting.

Our once in a lifetime experience needed to fulfill that totally impractical, ever so magnetic ‘something’. Judging from the number of people who bypass dozens of modern boats to take a picture of Wind Wanderer or have a chat, we have succeeded.

Tied to a marina we can only imagine. When the wind blows is when we learn.

We took possession of Wind Wanderer in the Cayman Islands, in hurricane season. She needed a lot of work before she would be ready to be sailed by a couple of retirees with palm trees in their eyes. While waiting for Tom to join us to sail our 30 ton piece of antiquity to the top of Chesapeake Bay in the USA, we anchored in the shallow water of North Sound.

When the wind blew we discovered the 65 pound CQR anchor was hopelessly inadequate. In the same blow we discovered the lightweight stainless steel fabrication holding the bow roller in the bowsprit could distort and snag the chain making it impossible to retrieve after we had broken free from the bottom. We also discovered the passing Fire Service Rescue boat was friendly but totally out of its depth and that competent help is not cheap!

Heading for the west coast of Cuba we lost our transmission and the wind was our only friend. It was undecided as to whether it would help us get to Key West, drive us to the Dry Tortugas, or to Cuba itself. We eventually managed to slip by just one mile off the west coast of Cuba. We had heard someone jabbering away in Spanish on the VHF and only realised they were calling us when we heard “sail boat heading north off Cuba west coast. Identify.”

We did and explained our dilemma, giving Key West as our destination. They wished us fair winds which carried us to Key West four days later.

The wind snapped at our heels with named storms hitting the Cayman Islands and Florida just behind us and it was only once we were tied to a dock in the Sassafras River, Maryland that we felt safe for the rest of the hurricane season. Little did we know.

When the wind blows it has a mind of its own and Hurricane Sandy came roaring up the east coast.

We were in its path but it veered north at the last minute and hammered New York. It also sank a replica of the Bounty with two souls lost just a couple of hundred miles to our south. We learnt the value of a good hurricane hole!

The next time the wind had something to teach us we were west of Bermuda heading down to Antigua, having weathered a messy crossing of the Gulf Stream.

Our mizzen sheet attaches to the midpoint between our davits and having been tossed about a fair bit Sandy was the first to notice the davits had adopted a jaunty angle that moved with the motion of the boat. We quickly braced them with diagonal lines to deck cleats and headed to Bermuda. Losing the davits would include the dinghy and our biggest solar panel.

We also learnt that Bermuda is never to be bypassed. Its people are happy, warm and friendly and it produces the best rum
on the planet.

Leaving Shelter Bay marina to transit the Panama Canal we learnt that even if it looks like you have five minutes before that black cloud hits, do not count on it.

We were planning to leave in the next half hour to meet our ‘advisor’ with at least an hour in hand. Suddenly we saw a huge threatening cloud approaching. All we needed was enough time to throw off the lines, back out and turn to face the wind. We were half way out when it hit. Instead of pointing into the wind, our only option was to hold her stern to and do any fending off as required. We actually manoeuvered into another berth and backed out again as the wind eased. We squeezed out with no damage other than pride.

When the wind blew off Panama we learnt to have a plan B.

We left Las Perlas Islands planning to swing past south of the Galapagos Islands, intersect the trade wind and head straight to The Marquesas. We had seen numerous boats heading out and returning to Panama a few days later with broken bits and broken spirits.

We picked a weather window and set sail.

The good wind lasted two days and then we started burning diesel getting nowhere.

We tried NW, we tried SW, all to no avail and when we passed Isla de Malpelo for the third time we decided to head south for Ecuador. Like Bermuda, we are glad we never missed it. Again, friendly, happy people.

We stocked up on more fresh produce than we could get through for $20, and filled our tanks with diesel at 33 cents per litre.

When the wind blew crossing the Pacific we learnt that three knots is OK. Nothing breaks at three knots and the miles still slip effortlessly under the keel.

We learnt that seven knots is a wonderful bonus when everything is balanced and Wind Wanderer skips along singing her merry rigging songs.

We learnt that there can be an invisible wind channel travelling at twice the speed of the air right next to it. We knew we were sailing the edge of the trades and using the Equatorial current.

We decided to head south in search of stronger wind, even though we had heard that some cruisers had been slammed by trade winds reaching 45 knots at the New Zealand end of the Pacific.

We had not even reached French Polynesia, we got our strong wind alright and it was like stepping from the platform in front of a train. The impact tore the deck fitting for the mainsheet traveller off its base.

It took us five hours to get back to some reasonable wind again.

We learnt that strong wind can sometimes hit long before the squall does and put a huge amount of pressure on rig and sail. A perfectly good spinnaker pole ended up with a 90 degree bend in it when the headsail gybed. We left it up in the rigging like a hanged mutineer until we got to Fiji.

Sailing up the east coast to the Great Barrier Reef we were hit by a southerly crossing Wide Bay and watched our tired old heads'l rip from top to bottom.

But when the wind blows gently we learnt that a couple who had never done it before could rig and launch a huge asymmetric spinnaker and drift along at six knots into the setting sun feeling like the luckiest people on earth.

When the wind blows, we learn.