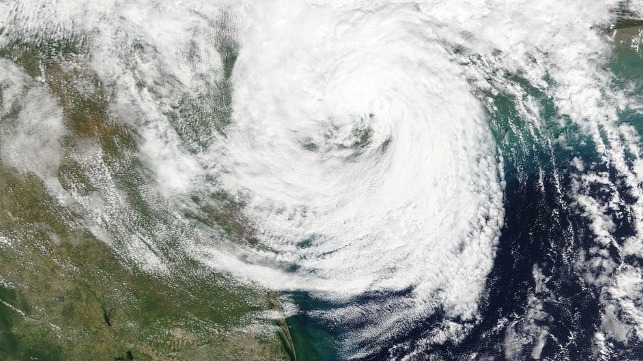 A lot can go wrong when hurricanes stall. Their destructive winds last longer. The storm surge can stay high. And the rain keeps falling.

During Hurricane Sally, Naval Air Station Pensacola reported more than 24 inches of rain as the storm’s forward movement slowed to walking speed along the coast. We saw similar effects when the decaying Hurricane Harvey sat over Houston for four days in 2017 and dropped up to 60 inches of rain in some areas – that’s 5 feet! Hurricane Dorian slowed to 1 mile per hour in 2019 as its winds and rain battered the Bahamas for two days.

Post-Tropical Storm Beta was the latest stalling storm, flooding streets in Houston as it slowly crept up the Texas coast and eventually moved into Louisiana.

Research shows that stalling has become more common for tropical cyclones in the North Atlantic since the mid-20th century and that their average forward speed has also slowed.

So, why does this happen? Here are answers to some questions I hear as a meteorologist about how storm systems move and why they sometimes slow to a crawl.

Why do some storms move fast and others slow?

Hurricanes are steered by the winds around them. We call this the atmospheric flow. If those winds are moving fast, they’ll move the storm fast. You can picture it as a leaf floating on a stream. If the stream moves slower, the leaf moves slower. When the flow turns, the leaf turns.

What the atmospheric flow is doing in a given location on a day-to-day basis can be pretty variable. How quickly a given storm will move depends on such things as whether a high-pressure ridge is nearby, or if there is low pressure where air flows counterclockwise. And steering currents can weaken if a storm is caught between different kinds of flow.

What does climate change have to do with it?

The Arctic has been warming about twice as fast as the mid-latitudes, where most of the U.S. is located. That’s reducing the temperature distribution, or gradient, between the Arctic and the mid-latitudes. And that can affect the steering currents, such as those associated with the Bermuda high.

On average, the forward speed of hurricanes has been slowing down. Simulations of tropical storm behavior have suggested that this slowing will continue as average global temperatures warm, particularly in the mid-latitudes.

A warmer atmosphere also means storms can tap into more moisture. As temperature increases, it’s easier for water to evaporate into vapor. Imagine setting your laundry out to dry on a hot day versus a cool day. Your laundry will dry faster if it’s hot out because the liquid water can become vapor more easily. Your laundry also feels cool when water evaporates from it because evaporation is a cooling process. In a hurricane, the opposite happens – water vapor reverts to liquid as cloud droplets, which means energy gets released, and that energy powers the storm.

If a storm slows, and if it has access to more moisture, it can dump more rain and produce a greater storm surge due to the slow motion.

Why are slow-moving storms so dangerous?

Inland, excessive rain can cause low-lying areas to fill with water and also leads to river and stream flooding. Slow-moving storms mean longer periods of heavy rain near the coast, so the inland flooding that heads downstream can meet the storm surge moving upstream, which is terrifying.

North Carolina saw that in 2018 when Hurricane Florence pushed a 10-foot storm surge into the Neuse River while dumping more than 20 inches of rain across a large part of the state.

Why is it so hard to forecast a slow mover?

To forecast a storm, we look at what we call “dynamical guidance” – computer models that simulate the atmosphere and make a prediction based on our knowledge of physics. Forecasters put in variables such as the current wind, temperature and pressure, and the computer uses that starting point to simulate what the weather could be hours or days into the future.

But our initial picture of the atmosphere is not perfect, and the computer can work only with what we give it. Each computer model is also a little different. They’re all based in the laws of physics, but the assumptions they make and how they take in data can vary from model to model.

When a storm is moving slowly, what could be a small difference in the initial atmospheric picture can result in big differences over the next few days. Why? When steering currents are weak, like 5 mph, a speed difference of 2 mph in the initial flow has a bigger impact than when the currents are strong, so it’s easier for the models to produce forecasts that end up looking different from what eventually happens.

Kim Wood is an Assistant Professor in the Department of Geosciences at Mississippi State University specializing in tropical meteorology. She obtained her Ph.D. in atmospheric science from the University of Arizona in 2012. She is currently pursuing research related to tropical cyclone climatology, tropical cyclone intensity and structure change, and scientific data visualization.

This article appears courtesy of The Conversation and may be found in its original form here.