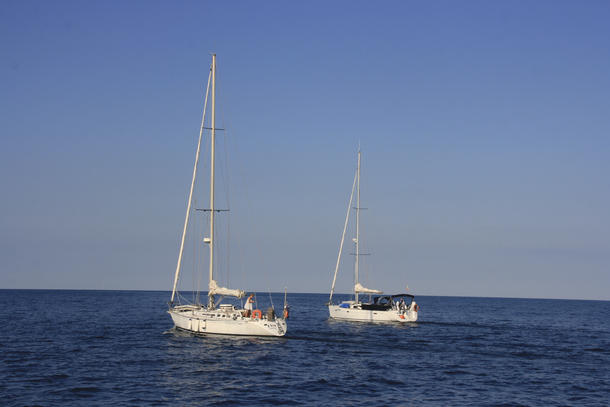 When you make the decision to live onboard a boat you will be changing your whole way of life.

In your new community people focus on caring and giving rather than jealousy and greed. You will find everyone looks out for each other, while maintaining a fierce independence.

It is a place where the weather determines the day’s activities rather than being shut out behind closed curtains. The egalitarianism of the sea overrides any status or ego people might have had in a previous life.

If you can relate to one or two of the above you will fit in with the live-aboard lifestyle.

There are many different ways you can move onboard and be a part of this community. A number of people live on motorboats in Brooklyn, north of Sydney. Sydney Harbour, however, is difficult to live aboard as the regulations prohibit permanent live-aboards on any NSW Maritime mooring. The idea, apparently, is the authorities do not want a Hong Kong junk-style community developing.

Fair enough, but if you keep a low profile and are officially ‘in transit’ you might be OK. There’s a good thread from 2014 on the Cruisers Forum website at www.cruisersforum.com/forums/f23/live-aboard-marinas-in-sydney-131715.html

There are plenty of marinas around the country who do not have the same restrictions as Sydney Harbour. Living onboard during holidays or for an extended cruise is fantastic and the experiences and people you meet will provide memories forever.

But the community we love is the group who have made the decision to permanently leave the rat race and live a more simplified lifestyle. These are the people who are part of the view, rather than watching it from the beach or the waterfront cafes. They have embraced their sense of adventure. This is why it is so easy to meet kindness from fellow live-aboards.

How is it in the Med?

There is a very strong live-aboard community in the Mediterranean and we have met some great friends in Marina de Ragusa (MdR), Sicily. This is where we’ve spent the last three northern winters.

From the many people we have met Barbara Kelly is probably one of the most surprising advocates for the live-aboard lifestyle. Barbara had no interest in boats until her husband Ned convinced her to go on an introductory sail for a week off the west coast of Scotland. Once she was onboard she did not want to get off!

In that week in Scotland, every day was different. But there was not any of what Barbara really enjoys now and that is the community of live-aboards. This is so different to anything else she has ever experienced.

Everyone has similar values and similar thoughts about freedom and privacy. When you are in the suburbs you have to make a conscience effort to meet with family or friends because everyone is that much further away. At MdR everyone respects each others privacy but the hospitality and socialising is much more spontaneous and joyful.

You cannot take your land ideas with you when you move onboard a boat. It is a major culture shock because you lose all your whitegoods and most other modern conveniences. Including cupboard space. No tumble dryer or microwave, although some big boats have these.

You do not have to maintain a garden, but there is always some job to do on the boat.

Life is more hands-on. It can take three or four years to get used to it but once you have become accustomed to taking responsibility for yourself, the feeling of liberty is wonderful.

When you live in the family home most people do the shopping by getting in the car, fighting the traffic and scrambling for a parking space. A real chore. Going shopping by boat is not always the easiest, but it is fun!

You do not know where you are going to land the boat, you don’t know where the shops are and, most of the time in the Med., you cannot speak the language. So just to go and buy a loaf of bread is a true adventure.

Years ago, while we were still working and living a ‘normal’ life, I read a book called ‘The unlikely voyage of Jack de Crow’ written by an Australian A. J. MacKinnon. The story was about his adventures as he sailed his Mirror dinghy from North Shropshire to the Black Sea.

Every time he got into trouble there was some outlandish episode of kindness where perfect strangers went out of their way to help. I did not enjoy the book as much as I could have as I was too sceptical about his escapes. Until we cruised.

For the last five years, each time we find ourselves in a spot of bother, someone turns up.

We were cruising in a remote area of the Peloponnese in southern Greece when our dinghy anchor became fouled. We were in about six metres, so it was not a huge problem. I was just about to dive overboard when a solitary scuba diver surfaced about 20m away. We could not speak Greek and he couldn’t speak English, but within 30 seconds he had dived down, released our anchor, then just swam away. Talk about timing.

Unlike many live-aboards we are hopeless fishers. I now take the very altruistic and hopelessly defeatist attitude that we would rather support the professional fishers and buy seafood at the local co-op.

When we were sailing up the east coast of Australia we stopped in a beautifully unspoilt anchorage called Pancake Creek, just north of Bundaberg. We had kayaked into one of the empty beaches and were just talking about the possibility of being attacked by axe murderers when two rough looking blokes walked out of the bush with axes over their shoulders!

We started talking and found out they were locals who often camped there to catch whiting. They found it hard to believe we could not catch anything in that area.

Later that afternoon we were back onboard Amble when we heard some hoons roaring around Amble in their dinghy. We looked up and the two suspected axe-murderers came close, threw a glad-wrapped package and shouted “there you go Jane, now you’ve caught a kilo of whiting!” They roared off never to be seen again, and that is still the only fish we have ‘caught’.

There are too many examples of strangers who have shown us more helpfulness and friendliness than you would ever find in a city. But there are also the great friends you make in marinas or anchorages.

We fly the Australian ensign in the Med. and whenever we see another Aussie boat, or Kiwis, or even the ubiquitous Poms in a remote anchorage, it is a great pleasure to row over and invite them onboard for a sundowner or two.

There are incredible highs when onboard, but also moments where the fear factor is stronger than anything we have experienced ashore.

When the seasons change in the Med. they change with a bang. The first week of September is known for its storms and unpredictability, as the summer high pressure systems give way to the first of the autumn cold fronts.

We were long-lined with three other boats off the southern shore of a bay in what we thought would be good protection from a forecast southerly wind. We had friends onboard for dinner and about 10.30 we started to see lightning closely followed by thunder. In what is surely a classic case of complacency we did nothing.

The storm hit from the west, dragging all four long-lined boats sideways onto the rocks. Luckily Amble’s keel struck one of the outlying rocks about five metres from the shore, so we were kept away from the cliff.

Jane and I kept using our bow and kedge anchors until we finally broke free and motored off to anchor.

We were very lucky. We had a small dent in the bulb of the keel and the bottom quarter of the rudder had been delaminated on the rocks as we pivoted off to get free.

We were all grateful that no-one had been injured and all the boats had only minor damage.

So what is living onboard really like? Great highs, terrifying lows while being a part of a unique, caring community.

You will feel more alive than you have ever been before!