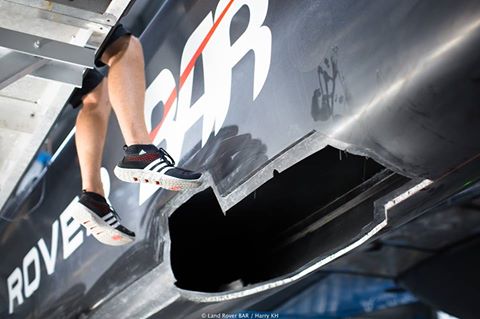 Damage to the hull of BAR after landing on Team Japan during the start sequence on the opening day of qualifying. Photo Land Rover BAR/ACEA.

The America's Cup Qualifying Series is only two days old but already we are seeing that this will be an interesting and competitive event. Everyone has had at least one win and at least one loss. While some will improve more than others, and the divide between the top and bottom teams will widen, the early signs are encouraging.

So what have we learned so far?

After the first day was postponed because of 30 knot winds and driving rain, the weekend delivered ideal conditions of around 12 knots. Before the event sailors told us the course was challenging for tacticians and we have seen wind shifts – as big as 40 degrees – allow a boat that's behind to get back into the race. The start is still very important, but it's not a case of “win the start, win the race”. We have seen Oracle, for example, get into phase with the wind shifts while their opponent was out of phase, and make huge gains in one beat.

Old skiffies must have chuckled when they heard Joey Newton explain why Artemis, who had been exceedingly fast in practice races, was a little off the pace in the first race on Saturday.

All teams are allowed four sets of daggerboards and most have opted for two high wind and two low wind sets. The low wind sets are bigger than the high wind sets, because they need more surface area to get the boats foiling in 6 to 8 knots.

In “changeover” conditions where the wind is around 10 knots, it becomes a gamble as to which set to use. Joey suggested that Artemis had their light wind daggerboards in, which created more drag than the smaller, high wind sets used by everyone else.

It's the old “big rig or small rig” question which 18ft skiff sailors have grappled with for decades. If you opt for the Number One and the wind builds, you'll be overpowered. If you go small rig and the wind eases, you'll be too slow.

Like an 18 Footers rig, once you've made your daggerboard decision you're stuck with it for the day. There is no time to go back in, crane the boat out, change the boards and put her back in the water.

So expect to see some surprise results when the wind is “on the margin”.

As predicted before the Qualifying Series started, Oracle, Artemis and ETNZ are the form teams. Oracle seems to have a speed edge and Tom Slingsby is calling good tactics, but the defender has been beaten once and it will happen again.

BAR is having big problems both with speed and manoeuvres and will need to improve dramatically to push either Artemis or ETNZ out of the Louis Vuitton final.

Dean Barker's starts on Team Japan are good, as always, but the boat is “Oracle light”, sharing many of the design features of the challengers but obviously not all. Japan is likely to prove a spoiler, perhaps taking vital wins off one of the more fancied teams, but I can't see them featuring in the finals.

Team France looked as though they would be the first team to go home yesterday but today they got a win – and a very good one. I still think they'll be the first team eliminated but more time on the water could see a few more victories and if one of the others has problems, France could still qualify for the semi-finals.

Stay Away From Ben

I was in the “fifth man” position on Ben Ainslie's Extreme 40 cat in Cardiff a few years ago when he poked it between a mark and Nathan Wilmot's boat. I didn't think it was possible, but he got through the smallest of gaps with just millietres on either side. He has also won four Olympic gold medals. The man can sail.

So why has he so far hit the dock, ETNZ and Team Japan? I can only assume that there is a communication problem with wing trimmer Paul Campbell-James. If the wing acts like a normal mainsail in a gust, unless the trimmer eases at the appropriate moment, the boat rounds up into the wind and the helmsman has no control.

If anyone can think of a better explanation, please share it in the Comments section below. But meanwhile, the best advice for the other teams is to stay clear!