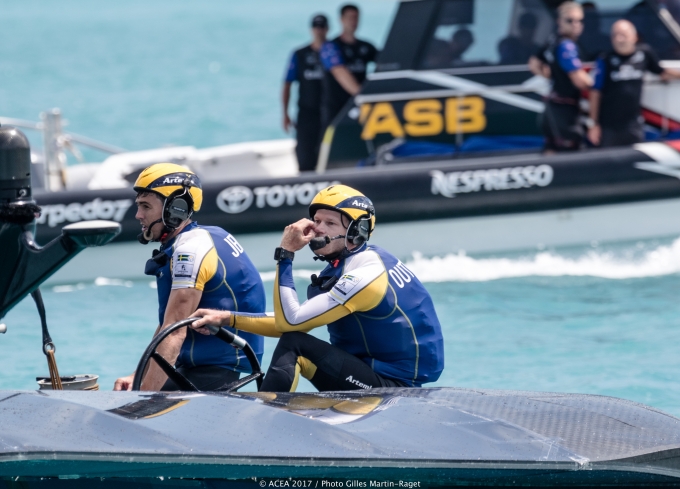 The happiest man in Bermuda right now will be Sir Russell Coutts, the architect of this battle between high-speed foiling catamarans. For the first time, we were treated to a good old-fashioned match race where the lead changed nine times and there were controversial umpires calls to further inflame passions.

It was a dream draw for Day Three, starting with the traditional rivals, Great Britain and France, before the war of the 49er champions, which was the one that delivered the drama.

With the wind blowing 12 to 16 knots and, as usual, oscillating through 30 degrees, the course was delivering everything Coutts had promised.

First blood went to the British, with Sir Ben Ainslie delivering a well-executed hook to Franck Cammas and racing away to the reach mark well in front. The boats were well-matched for speed downwind before a split at the gate saw the French get lifts to the left side of the course. Cammas managed the course better, coming into the top mark at seed on starboard and when GBR splashed down during their final tack, the French boat played “buffalo girls” and swept around the outside into the lead.

Again the downwind speed was similar, with Cammas holding a 10 second lead at the bottom gate. Again they split going up the course and again the French put themselves in the right place at the right time.

“Keep working!” was the cry from Ainslie to his weary crew but their efforts were to no avail. France crossed the finish line to win by 53 seconds.

The second race of the day matched two old friends and rivals. At the 2012 Olympics, Australians Nathan Outteridge and Iain “Goobs” Jensen had the gold medal won before the medal race. The Kiwi pair of Peter Burling and Blair Tuke were a distant second. At Rio 2016 the roles were reversed. The former training partners were no longer sharing secrets and this time the Kiwis had it in the bag before the medal race, with the Aussies taking silver.

Nathan Outteridge helms the Swedish entry Artemis with Goobs, his boyhood friend from Wangi Wangi on Lake Macquarie, trimming the wing. Peter Burling is at the helm of Team New Zealand, with Blair Tuke in a grinding role.

Coming into this race, the smart money is on these two to contest the Louis Vuitton final, to decide who gets to challenge Oracle for the America's Cup, so the stakes were high.

As usual, aggression was the order of the day in the pre-start, with Burling setting up for a hook. Outteridge saw him coming and closed the gap, putting Artemis in a dominant position. With the whole line ahead of him and ETNZ slow on his stern, Outteridge either reacted too quickly or got a bad call from his bowman. He pulled the trigger an instant too early, was over the line and has a two boat length penalty.

Always a quick thinker, Outteridge ran to the reach mark before going wide, letting Burling through and wiping off the penalty but putting the Swedish boat in a position to minimise the damage by accelerating down the course.

At the bottom mark they split, Artemis went ahead up the beat, the Kiwis got back in front on the run and Artemis closed the gap again. Crossing for the first time on the second beat, the Kiwis attacked and forced a big dip from the Swedish boat.

“He's going about, go!” yelled Iain Percy, tactician on Artemis. Again they crossed and again the Kiwis held the advantage. But in similar fashion to the previous race, Artemis had managed the course better and the Kiwis had to throw an extra tack near the mark while Artemis swept through the gate at speed.

On the final run the lead was again changing and again it looked as though Artemis had managed their angles better. While the Kiwis had to gybe right on the mark, Artemis was coming in from the other side at speed, but on port gybe.

The Kiwis entered the zone first and watched in dismay as Artemis swept past at much higher speed. It looked like a clean pass to everyone in the television booth and to all but the New Zealanders watching around the world. Burling pushed the protest button. The on-course umpire was behind the boats, where the distance between is fore-shortened, and he agreed with Burling. The blue light flashed on Outteridge's screen and we could hear him yell, “No way! No way!”

But the umpires call is final and the Swedes had to pull back and allow the Kiwis to take the win.

“We are still shocked by what happened,” Outteridge said after the race. “As soon as I saw the light I knew what had happened and we were already at the line by the time the decision was made. We all thought we gave them enough room and I still stand by that opinion. However the umpires obviously didn’t agree. That’s racing, sometimes you get the decisions and sometimes you don’t.”

UPDATE: After the race, the umpires admitted they got the call wrong, but unfortunately for Artemis, the on-water call stands.

“When they were coming down to the final gate mark, with the information we had at the time, we had Artemis Racing on port, as the keep clear boat, and Emirates Team New Zealand on starboard, and our job is to be certain that Artemis Racing were keeping clear, and we weren't at that time certain they were keeping clear,” said chief umpire Richard Slater. “We have had a discussion, we have looked at other evidence, information and data, and I think if we were to go back in time and make that call, we would green that call and not penalise Artemis.”

Looking ahead to the challenger final, the Artemis crew can take heart from this race. An unforced error and a bad call cost them the point. But they sailed the better race.

It was close enough that future matches between these two will be watched with anticipation by all concerned.

In contrast, the final match was a total anticlimax. Dean Barker won the uncontested start easily, crossing the line 10 knots faster than the French who looked drained from their battle with Ben. It was back to the form of Day One, with the Japanese boat extended at every mark to win by a massive 2 minutes 34 seconds.