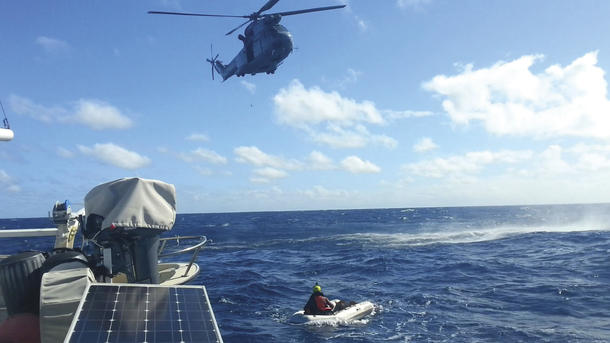 I had been looking for a crew spot for an ocean crossing for a few weeks.

An off-chance reading of the notice board in the Whangarei marina office started a conversation with the crew of an American ketch that was planning a departure to New Caledonia. I was introduced to Captain Bob Philips and after a brief interview, became the First Mate for the crossing.

The remainder of the crew consisted of Adam Walker from England.

Sunday 7th June Crescendo, a Challenger 50, slipped her lines and motored down the Hatea River from Whangarei Town Basin to Marsden Point Marina for a Monday morning Customs clearance. A cheery farewell followed, from New Zealand’s Customs as he locked us out of the marina, reminding us not to stop anywhere along the coast. We cast off and found ourselves on our way north to Noumea. We estimated the passage would take about seven days.

As we watched the sun set over Cape Brett a little apprehension and a lot of excitement flooded through my veins. The weather for the trip had been studied for the past week, Met View, Windyty and Passage Weather all showed a high pressure system reasonably stationary over the top of the North Island for the first three or four days of our passage. That meant light southerlies of 10 knots or less. The trades were looking good further north.

The sun rose and spread over the north east on my first open ocean morning. As the sky was taking my breath away another first came into view. An albatross, wingspan in the order of four metres, swooped and dived in the air thermals around Crescendo. It seemed to say welcome to my world. The majestic bird circled the ship a few times and then disappeared east toward the rising sun.

Adam joined me as the sky brightened, this being his first ocean crossing too. Together we marvelled at the planet around us.

About 07:40 we witnessed a water phenomenon. The sea ahead appeared to be boiling! Referring to the chart, the sea bed had risen from 2000 metres to within a hundred and fifty metres of the surface. The east going current was welling up between two sea mounts and causing the surface to dome up and flatten the waves and swell. We altered our heading to avoid being spun around.

Thursday's mid-day fix had us averaging 5.6 knots, on track for the seven day passage. Later, with full main and mizzen both with boom brakes and preventers and a poled out genoa, Crescendo rattled along at a consistent 6.5 knots. Some really exhilarating sailing.

More like an ocean passage now with big swells with long wave lengths and a fast boat. The ComNav marine auto-pilot coped really well with the conditions.

At 05:10 on Sunday Bob woke me from a deep sleep. Adam was feeling unwell, a very bad stomach ache. Bob looked worried.

Adam had complained of stomach cramps at dinner the previous evening. I went forward to see Adam curled up in a ball on his bunk. I asked him to describe his symptoms. He complained of severe pain below the belly button all across his abdomen. He was also nauseous.

Adam looked very pale. I pressed is abdomen all over for the telltale sign of rebound pain in the lower right quadrant, having experienced what was crossing my mind; appendicitis.

We decided to administer some pain killers and seek some medical advice.

Bob called using the single side band, whilst I tried a pan pan medico on the VHF; pretty sure there was no one within range. After failing on both counts we regrouped and reassessed Adam.

The satellite phone was warmed up for a call to Maritime New Zealand in Wellington. For some reason the phone failed to dial any number in New Zealand! We checked and double checked codes and numbers to no avail.

I noticed that the phone only had a call history of US numbers; Bob suggested a call to US Coastguard. I spoke to the Coastguard in San Diego, who did a double-take when he calculated our position as 200 nautical miles south of New Caledonia!

I explained what we needed. Within ten minutes of initialising the call I was speaking to an emergency doctor in Noumea. After a short conference call they decided that they were coming to evacuate Adam.

Our course was plotted and distances calculated, we were too far out. The French military said they could collect Adam from 100nm, via a fuel stop on Ile des Pins, 70nm south of Noumea.

I calculated the course change required, this gave us a much better speed over the ground; meaning the rescue mission could commence in an hour versus three hours.

The plan for the rescue was that we would put our inflatable dinghy in the water, trail it behind Crescendo on a 30m line, the medic and frogman would be lowered into the dinghy and come aboard to assess Adam. By this time the seas had risen to 3.5m and the wind was up to 25 knots.

We donned lifejackets and tethers and proceeded forward to unpack the dinghy. Pumping it up on the rolling, heaving deck produced similar acrobatics to be found in the circus. We lashed it to the rails and set about dousing the rig.

Just as the last sail was tied to its boom the helicopter came into view. The dinghy was lowered over the side with the help of a spare halyard and trailed as instructed. The helicopter circled us once then came onto the hover over the target. Two wetsuit clad men appeared on a line and proceeded to dance around the tops of the waves aiming for the dinghy.

The first attempt saw them curse the swell as they floated away to be collected by the helicopter. Second time and the frogmen successfully occupied the inflatable. One of them started to hand-over-hand the painter, so I did the same from the other end.

The medic took one look at Adam and announced that he was taking him.

A few minutes later Adam, now donned in lifejacket, harness and helmet was in the dinghy, accompanied by the frogmen. The dinghy again trailed behind as the roar or the twin engine helicopter closed the gap for the recovery.

Less than 15 minutes from the first siting of the aircraft it was on its way north, after a nose dip and salute from the cockpit. Bob and I read that as thumbs up for our prompt preparation and execution of their instructions.

We spent a very wet and tiring hour or so recovering the now water-logged dinghy and returning to a sailing course to the Boulari Channel. Bob and I sat exhausted in the cockpit, blinking salt from our eyes wondering what had just taken place.

The galley had taken a bit of a battering during the excitement; coffee pot and food all over the place. So after a joint clean up party we settled into a 4X4 off watch routine for the rest of the passage.

Around 8am Monday, due north, New Caledonia came into view for the first time. Through grey cumulus, the tops of the mountains in the southern area of Grand Terre Island poked the noses over the horizon.

We passed through the Boulari Channel just after mid-day, between breaking rollers on either side and were alongside the ‘Visiteurs’ pontoon at Port Moselle marina by 3pm.

We believe the SSB failed to raise help because the transmitting channel had been inadvertently changed when trying to get on the Pacific net earlier in the week and the operator had not pressed the 2182kHz reset button.

Once the link was made the satellite phone proved invaluable. With regular calls from Noumea to check our position and heading it made the helicopters task of finding us easy.

We found Adam in the local hospital, he was fine. They think he passed a kidney stone, Ouch! No surgery. He will join us back aboard.

Our passage took seven days and three hours. Covered 908nms, including the detour for helicopter rendezvous, covered in an average of 5.4 knots.

What an exhilarating, challenging and awe-inspiring week.