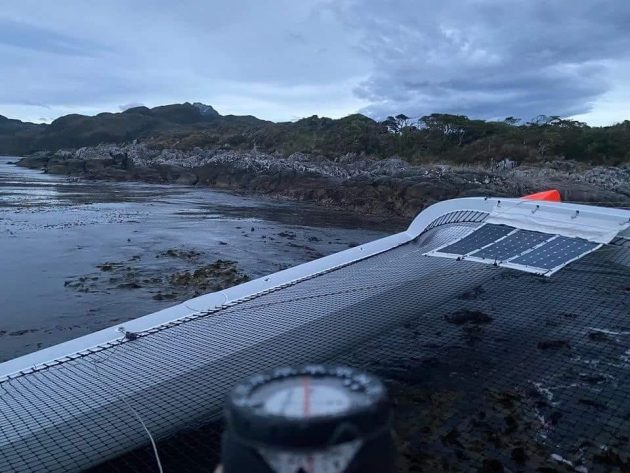 Two skippers attempting an around the world record attempt against the prevailing winds and currents have run aground in the Patagonian channels, South America, having taken shelter from a storm after rounding Cape Horn.

Romain Pilliard and Alex Pella are attempting to break the ‘world’s toughest sailing record’, a non-stop circumnavigation from east to west, in the trimaran Use It Again! The 75ft Nigel Irens design was originally Ellen MacArthur’s B&Q.

The team’s social media channels reported that at 0500 GMT (0100am local) Wednesday morning, the trimaran ran aground in Cook Bay. The report continues: ‘The skippers are not injured, they have put on their survival suits and are safe. The trimaran is immobilised on the rocks but [is not floating] at the moment.”

Later this morning Pilliard gave his update on the incident: “It was 1 am local time when a loud noise woke me up. The boat came to a stop. I immediately understood…

“Alex was on watch, and it was my turn to rest. After more than a month at sea, fatigue has accumulated and Alex has settled inside and fell asleep. This is an actual nightmare! I don’t really have the words. I am devastated.”

For the full story, see: https://www.yachtingworld.com/all-latest-posts/westabout-round-the-world-record-attempts-on-rocks-off-cape-horn-136739