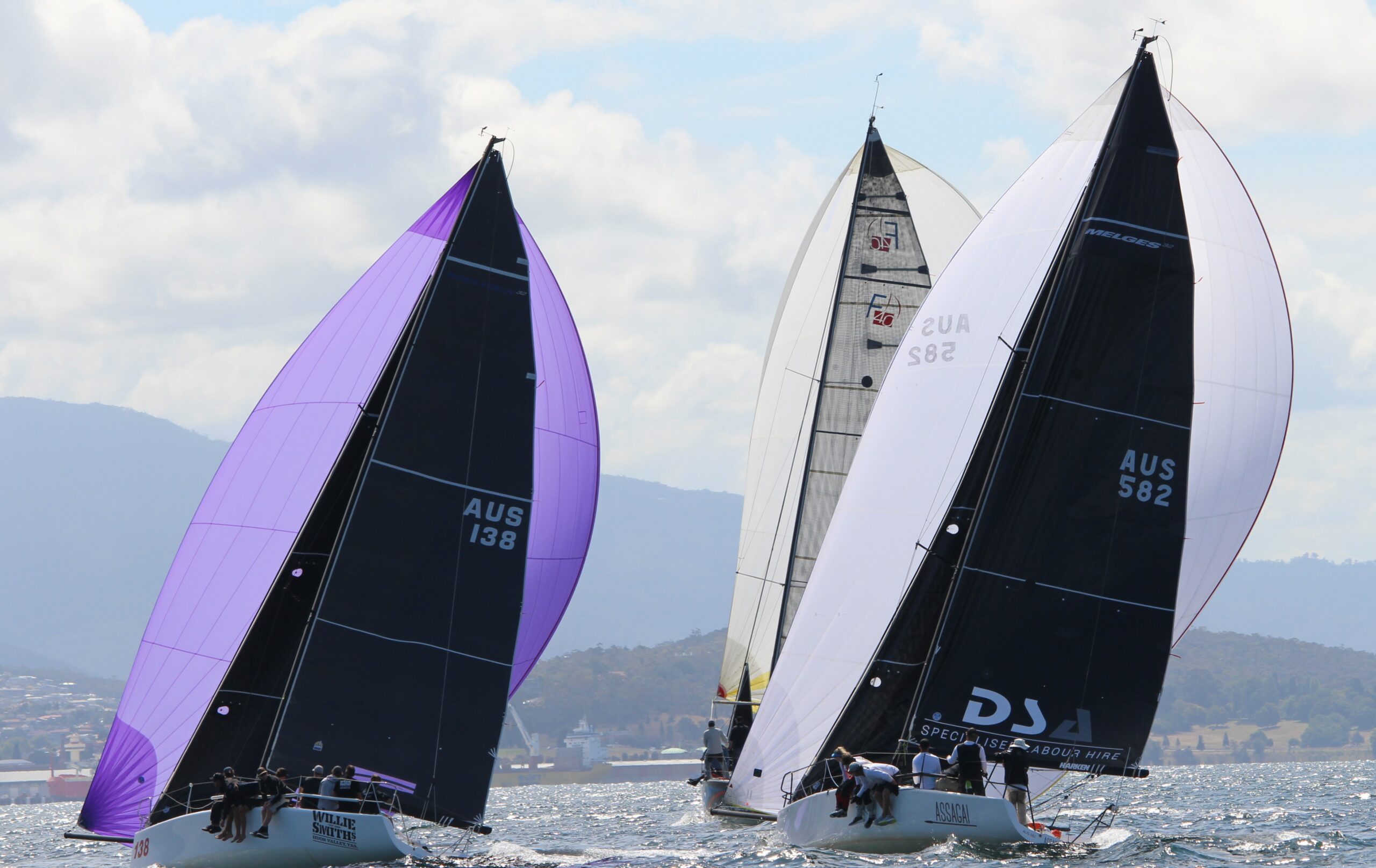 Hobart: Match racing from the Melges and some fancy footwork from Footloose were the highlights of racing in the Combined Clubs Harbour Series on Saturday.

The series, run by Royal Yacht Club of Tasmania, Derwent Sailing Squadron Inc and Bellerive Yacht Club, is going down to the wire with only one race day left in the sailing program. The competition for podium places has intensified, setting the scene for a thrilling final race day in March.

Race Officer Nick Hutton got the fleet away in a near perfect 8-10 knot south easterly breeze for Race 5 of the series, the first race of the day. In Group 1, the high-performance one-design Melges 32s were in their element. Cockwomble (Andrew Smith), not a regular in the series, and Assagai (Chris Sheehan), match-raced for the entire first lap.

Cockwomble managed to pull ahead on the second lap and was set for a solid win, but Fork in the Road (Gary Smith) had other plans, piling the pressure on the 32-foot sportsboat, setting up for a close finish. Cockwomble took line honours by a mere two seconds and won on IRC and PHS handicap while Midnight Rambler (Ed Psaltis) won on AMS. Andrew Smith was impressed with his team’s efforts and the racing overall.

“Anything under 10 knots in relatively flat water and we can compete with the bigger boats. My crew are brilliant to sail with, and we are lucky to have the smarts of Elliott Noye and Sam Tiedemann onboard – it was certainly a day of friendly, fair and competitive sailing,” Smith said.

The breeze picked up to 12 knots for Race 6 and waterline length came into play, suiting the Fork perfectly. The Bakewell White 45 finished just over three minutes ahead of second finisher, Jazz Player (Brent McKay), which was enough to give them victory on PHS as well. Intrigue (David Calvert) won on AMS and Midnight Rambler on IRC.

In Group 3, Invincible (Bryan Walpole) had two bullets, but the day belonged to skipper Stewart Geeves and the crew of Footloose, who won each handicap division bar one, thrusting them into the lead on PHS and AMS in the overall harbour series.

Geeves, from the Royal Yacht Club of Tasmania, credits his team’s success with getting the basics right, putting in the effort and consistent sailing. “We are just a bunch of mates who sail together for fun – any wins are a bonus. But starts are the key to this short course racing. We are getting most of the fundamentals right – great boat handling, good boat speed and good tactics,” said Geeves. “It is very tight with Invincible and Rumbeat (Justin Barr) both being very well sailed, and they are difficult to hang on to being so much bigger than us.”

Rumbeat and Trouble (Dave Willans) misread the course for Race 5 and were disqualified but were able to discard that result when the drop kicked in after Race 6.

In Group 2, Arunga (Andrew Parker) had wins on PHS and IRC in Race 5. 42 South (Mark Ballard) won on AMS in both races and in Race 6, Small Gains (Steve Chau) took home the chocolates on PHS and IRC.

Innovator was in her element on the River Derwent with co-skippers Dean Aberle and Ian Smith sailing the comfortable Compass 33 perfectly to take out PHS in both races.