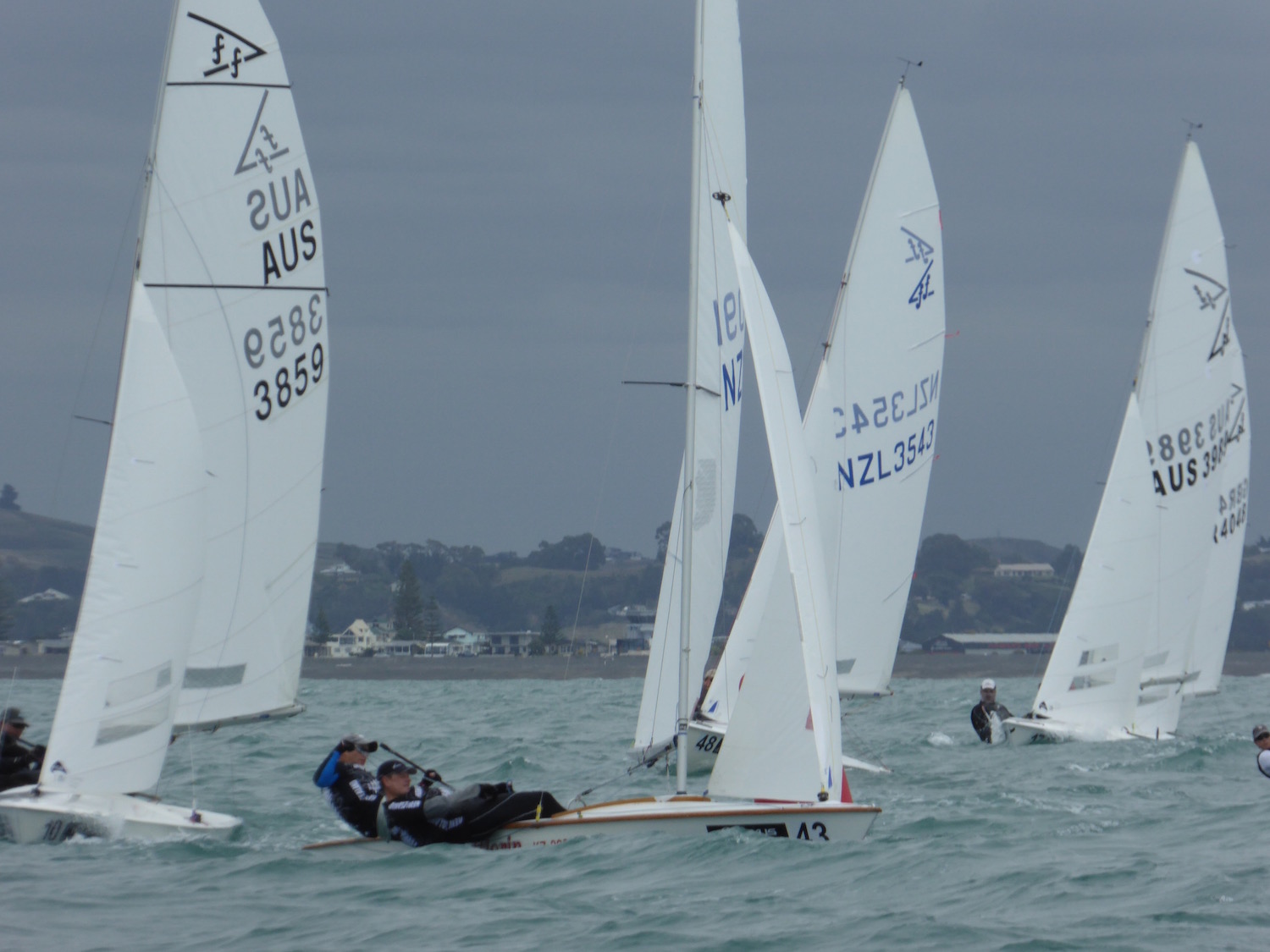 The 21st Lexus Flying Fifteen World Championship has attracted 57 competitors from New Zealand, Australia, Canada, Great Britain and Hong Kong for six days of racing in Hawkes Bay on the East coast of the North Island of New Zealand.

Day 1 of the championship started with very light airs and humid overcast skies, so the fleet were held ashore for a couple of hours in the hope that conditions would improve. By early afternoon a light Easterly breeze built to allow the PRO to bang off two races back to back.

Race 1 started with a general recall with a heavy presence at the committee boat end. The restart under U flag caught out a couple of competitors but it was the kiwis that emerged at the top mark in a huddle.

At the gate, the locals from Napier held their lead but on the next upwind were being pursued hard by David Yu & Chris Nelson from Royal Freshwater Bay YC in Perth and the British pair Greg Wells & Richard Rigg, representing Hayling Island SC & Royal Windermere YC.

As the wind continued to swing, the reach to the wing mark was lengthened and became broader, leaving a tighter reach to the downwind gate. Percy & Pedersen held their nerve to lead at the final gate rounding but the pressure was on for the final beat.

There was a loud cheer as the locals took the first gun of the championship from Matthew Owen & Andrew Reed from Canberra YC, who had themselves worked their way through the fleet to finish second. Yu & Nelson (AUS) overtook the Brits, Wells & Rigg for third and Nick & Janet Jerwood from South of Perth YC finished a solid 5th.

As the grey clouds gathered and skies darkened, race two commenced in similar conditions. This time David Yu & Chris Nelson got a great start, tucked in close to the committee boat and sailed in clear air up the middle right, whilst Steve Goacher & Tim Harper (Royal Windermere YC/Southport SC worked the left.

The Australians led down the run as the fleet split gybes with quite big separation. At the gate the breeze started to fade and become quite unstable but the Perth crew managed to keep a loose cover on their opponents. The second lap, a triangle, became quite a slog as the breeze struggled late in the afternoon. Aaron Goodmanson & Alister Rowlands (NZL) rom Charteris Bay YC moved up to second ahead of Jeremy Davy & Martin Huett (GBR) from Draycote Water SC.

The last beat was an agonising crawl to the finish line but Yu & Nelson managed to hold on to take the gun and the overall lead in the regatta. Nick & Janet Jerwood (AUS) worked their way through the fleet to finish 2nd and the kiwis Goodmanson & Rowlands 3rd. Owen & Reed (AUS) sailed a great final beat to finish 4th and Davy & Huett (GBR) 5th.

“Both races were hard work, especially the first one where we had to work our way out of a bit of trouble on the start line but we managed to make the right decisions and have a good day.  We learnt a lot of lessons from the NZ Nationals where we were extremely inconsistent and made a few bad decisions.”

“The last work in the last race when we were leading, we had a few anxious moments because the breeze started going back left and we were on the right hand side of the leading group, but we were fairly confident it would come back because it had been doing that all day, so it was a big relief when that right hand shift finally came.” explained David Yu

Day 2 of racing has just one race planned with a start time of 1300hrs (local time).