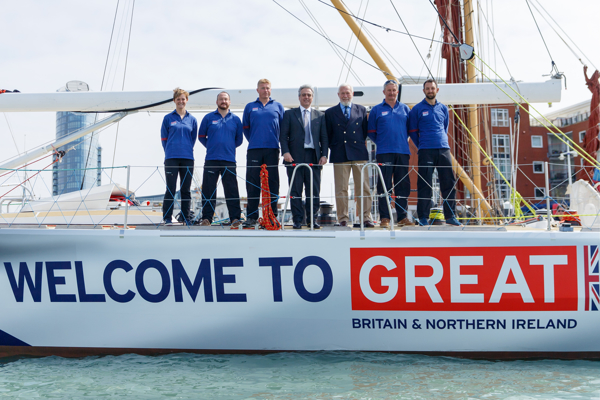 The UK Government’s most ambitious marketing initiative, the GREAT Britain campaign, has announced it will be entering a team in the Clipper 2017-18 Round the World Yacht Race, the world’s largest ocean race, which starts this August.

Mark Garnier MP, International Trade Minister, said: “As we look to forge new trading relationships around the world, the GREAT Britain campaign's partnership with the Clipper Round the World Yacht Race is a huge opportunity to showcase the best of British to the world.

“Travelling along historic trading routes, the yacht will play an important role in promoting the UK as a place to visit, study and with which to do business. We remain an outward looking, enterprising nation and this partnership will help as we look to build a truly Global Britain.”

The GREAT Britain team yacht carries its new slogan, Welcome to GREAT Britain & Northern Ireland, across both sides of its hull, allowing the UK to boldly promote itself as a creative, authentic and welcoming nation everywhere it goes whilst continuing on its journey producing high-quality return on investment for the UK.

Speaking on board the 70 foot racing vessel, Sir Robin Knox-Johnston, legendary sailor and founder of the Clipper Round the World Yacht Race, said: “The Clipper Race offers partners a unique global platform from which to showcase and activate key brand messages around the world.

“After such successful collaboration between GREAT Britain and the Clipper Race during the 2013-14 and 2015-16 editions, we are so proud to continue working with the GREAT Britain campaign to carry their evolving key messages around the globe and generating genuinely engaging content through the diplomatic networks, overseas business networks, or with other partners to the race.”

As a Clipper Race Team Partner, the GREAT Britain campaign, which first partnered with the Clipper Race in 2013, will stand side by side with teams and crew from across the world to project everything the UK does best in business, education, global security and prosperity.

The eleventh edition of the unique biennial Clipper Race will visit six continents and include six ocean crossings. Almost 5000 novices have been turned into ocean racers during the past twenty years of the Clipper Race, though still more people have climbed Mount Everest than circumnavigated the globe.

The twelve Clipper Race teams compete on the world’s largest matched fleet of 70-foot ocean racing yachts. Around 700 crew come from all walks of life and from all around the world, with over 40 different nationalities represented. Crew can complete the full circumnavigation, or one or more of the eight legs that make up the Clipper Race.
The Clipper 2017-18 Round the World Yacht Race will start this August from the UK.