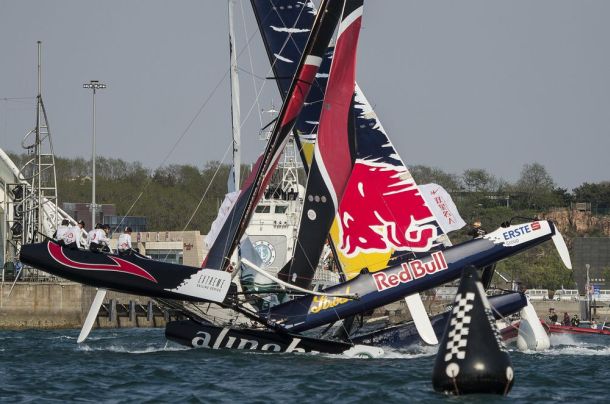 With less than a week to go until the Land Rover Extreme Sailing Series Act 3, Qingdao, there is a palpable tension in the air, as the nine-strong Extreme 40 fleet head to China’s Olympic sailing city, 30 April – 3 May.

A make or break racecourse, Fushan Bay in the heart of Qingdao is a perfect sailing stadium. Surrounded by skyscrapers, the gusts come in thick and fast but from unpredictable angles, with a tendency to catch the fleet off guard as they hit them, which is previous years has resulted in some of the biggest crashes and most dramatic moments ever seen in the Series.

“Qingdao is infamous and this year looks like no exception. The long term weather forecast is for 25-30 knots next weekend,” Race Director Phil Lawrence explained. “It’s a very challenging venue for the sailors it can throw anything at them; big waves, strong winds, flat calm, fog. They need to be prepared for everything.”

For the team that can hold their nerve, the potential reward is worth it – for the last three years the crew that has mastered the conditions in Qingdao has gone on to win the Series – that honour going to The Wave, Muscat in 2012 and 2013, and Alinghi in 2014.

Heading to China, the podium is in deadlock, The Wave, Muscat (OMA), Red Bull Sailing Team (AUT) and SAP Extreme Sailing Team (DEN) all tied on 18 points at the top, with Series newcomer Stevie Morrison and the team on Oman Air just five points adrift in fourth.

Honours at Act 2 Muscat went to Leigh McMillan and his veteran crew on The Wave, Muscat on home waters. While SAP Extreme Sailing Team, co-skippered by Jes Gram-Hansen and Rasmus Køstner are currently sitting third overall on count back after two second places. Experienced on the Qingdao racetrack, Gram-Hansen is ready to take the teams’ inaugural Act win.

“You’ve got to be on your game, I think mentally you need to be very focused, to keep up with everything that’s going on in the racecourse, but it’s adrenaline fuelled racing that’s for sure – you just have to remember to enjoy it.”

Having last hit the Qingdao podium in 2013 finishing third, Gram-Hansen knows his team has the potential to do well. “We’re not taking anything for granted. We want the team to feel good about the hard work is paying off, but it’s one race at a time. We need to temper how we review every day’s successes and learning.”

With up to eight races planned each day, the action will kick off Thursday 30 April with the official media day before the free to enter public Race Village opens located at Fushan Bay, the home of the 2008 Olympic Village, from the Friday 1 May.