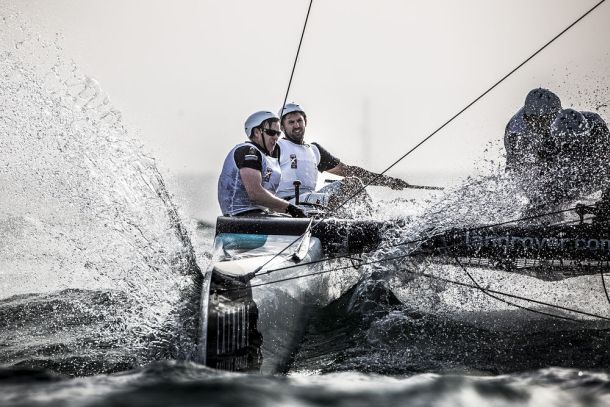 The opening day of the Extreme Sailing Series, Act 2 Muscat, delivered an afternoon of perfect racing conditions, as the eight-strong Extreme 40 fleet flew around the coastal racecourse in Muscat, Oman, relishing the North-Easterly breeze that filled in from eight to 16 knots.

With six races complete, the stand-out team for the day was undoubtedly home boat The Wave, Muscat, with British Olympian Leigh McMillan on the helm joined by two-time British Olympic gold medallist Sarah Ayton. Aytons’s clear, concise tactics onboard saw the team sail a smart course, with the fastest boat speed downwind which led them to the podium in five out of six races, according to the SAP Sailing Analytics. The only blemish on an otherwise near-perfect score line came in the second race, after a tight rounding at the first windward mark with Red Bull Sailing Team, which resulted in a penalty and a last place finish.

On the dock, helm McMillan was quietly satisfied with the result. “I didn’t realize how well we had done. We had a few good races – but then that last place, so that was frustrating. I love the intensity of the racing, it doesn’t give you time to sit around and contemplate a bad result, you have to smash into the next race and I like that. It was really nice work by the team, and great to be sailing in these fantastic conditions.”

However, The Wave, Muscat know is isn’t easy to stay at the top, with McMillan admitting, “We often have our highs and lows in these events. We have to push all the way and not let our grip go.”

With an anticipated 20 races still to come this week, the Omani teams four point lead over second placed SAP Extreme Sailing Team, co-skippered by Jes Gram-Hansen and Rasmus Køstner, could quickly get eaten into. The Danish team had an outstanding day, finding consistency within the fleet and the rolling waves to finish in second place, proving that this team are hot contenders for a podium position, after their second place finish at Act 1, Singapore just four weeks ago. Even an OCS (over course start) in the second race today, couldn’t break the stride of the Danes, and thanks to the cool head of tactician Køstner, the team broke away from the fleet, took a right wind shift that came in their favour and lifted the team from last to fourth place.

Speaking after racing, Køstner summed up a job well done. “There are a lot of waves here so you have to think about your manoeuvres. The key is full speed around the course. It is full on action out there – lots of white water spraying off the boat and with everyone pushing hard, things happen quickly. It was a good day on the water.”

With a storm due to blow over the city tonight, Race Director Phil Lawrence is optimistic that we will see another day of idyllic 16knot breeze tomorrow for day two in Muscat, as the fleet move into the stadium and the event opens to the public.

Tune in and watch the racing live from 1530 local time (GMT+4) www.extremesailingseries.com/live.